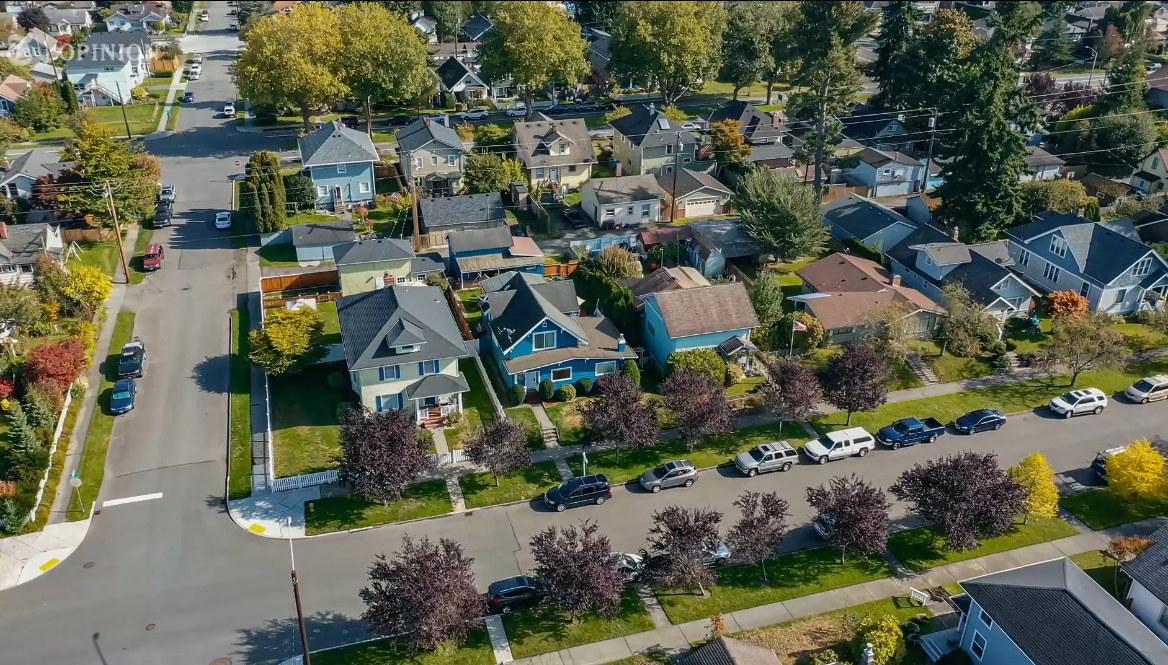 Nice video piece in the Times this week from Johnny Harris and Binyamin Appelbaum.

“It’s easy to blame the other side. And for many Democrats, it’s obvious that Republicans are thwarting progress toward a more equal society,” they write in their introduction.  “But what happens when Republicans aren’t standing in the way?”

Basically they ask: “What do Democratic do with all the power?”

California is a perfect example of this.  Harris says that California is the quintessential liberal state – and while probably true, I would argue it’s more Democratic than it is liberal or certainly not progressive, but yeah, the Democrats do own the problems here as they have now basically had an uninterrupted decade in power – they control all the levers of government.   You look at the eight biggest cities, only in Fresno and Bakersfield, are there Republican Mayors.

They identify housing policy as a key area where California falls short.

built in your neighborhood,” Appelbaum states.

This is the critical point where I think we fall down not just in California as a whole, but in Davis specifically.  People who rail against income and economic inequality and then who go home in their million dollar homes and their single family neighborhoods really are cooking the goose here.

Harris whips out the California Democratic Party platform and points out that “Democrats completely agree here in this document.”  He notes, “The word housing is mentioned over 100 times.”

“The neighborhood where you are born has a huge influence on the rest of your life,” Appelbaum says.  “Children who are born where there is degraded environmental conditions, with a lack of access to high quality public services or schools or public transit are at a permanent disadvantage.”

From the Democratic platform: “Housing in America should be stable, accessible, safe, healthy, energy efficient, and, above all, affordable. No one should have to spend more than 30 percent of their income on housing, so families have ample resources left to meet their other needs and save for retirement.”

It continues: “Democrats believe the government should take aggressive steps to increase the supply of housing, especially affordable housing, and address long-standing economic and racial inequities in our housing markets. We support innovative approaches to eliminating the racial wealth gap in America. Rehabilitating housing and expansion of housing owned by land trusts will increase the amount of housing available for secure homeownership.”

They quote officials around the state who state, bluntly and plainly, “housing is a human right.”

And yet as Appelbaum points out, instead of welcoming people to California, they ought to post, “Keep out” signs “because the cost of housing is so high that for many people its simply unaffordable.  The state is simply for the most part stopped building housing.”

Housing construction he said has slowed down to the point where “it is nowhere near sufficient to keep up with California’s population.”  The result is “price has gone up up and away.”

Harris in his voice over points out that all over California, people say that they are liberal, progressive, they believe in a more equal America – “they show up at the marches.  They put up their signs about everyone being equal.  But at the same time, they’re actively fighting to keep their neighborhoods looking like this.

He said, you have a tendency to say, “That isn’t so bad…”  But then he points out, “This is the specific result of policies intentional policies that keeps these neighborhoods spread out and full of single family homes – as opposed to higher density buildings like duplexes or apartment complexes.” 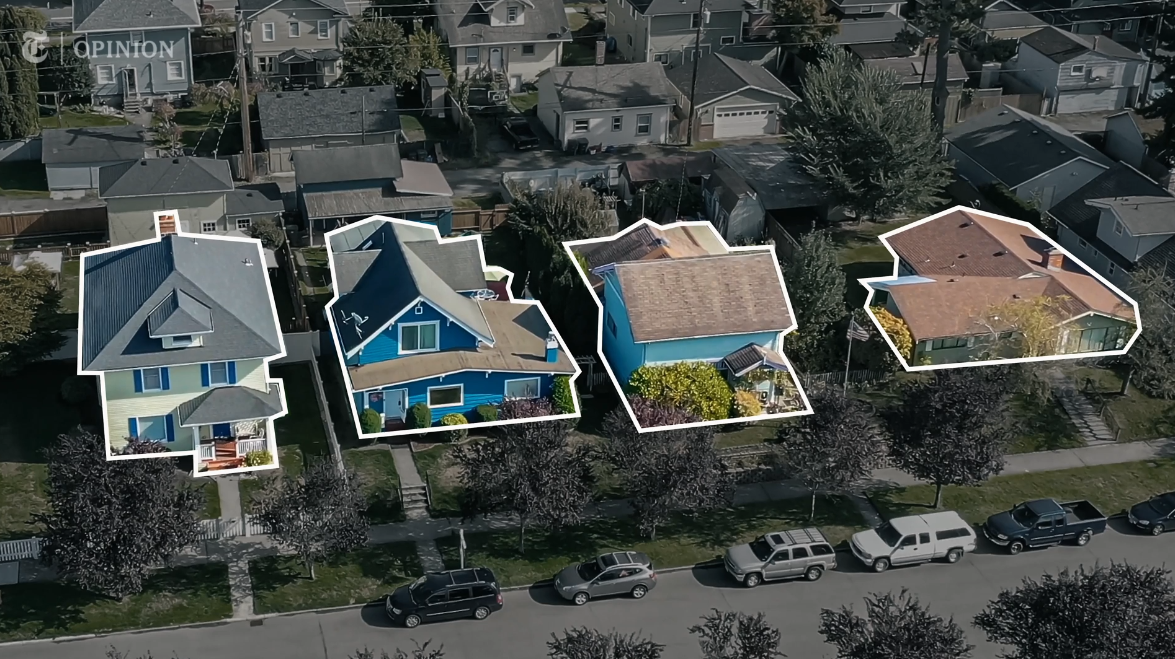 This he said is the fight.

He uses Palo Alto as the example. 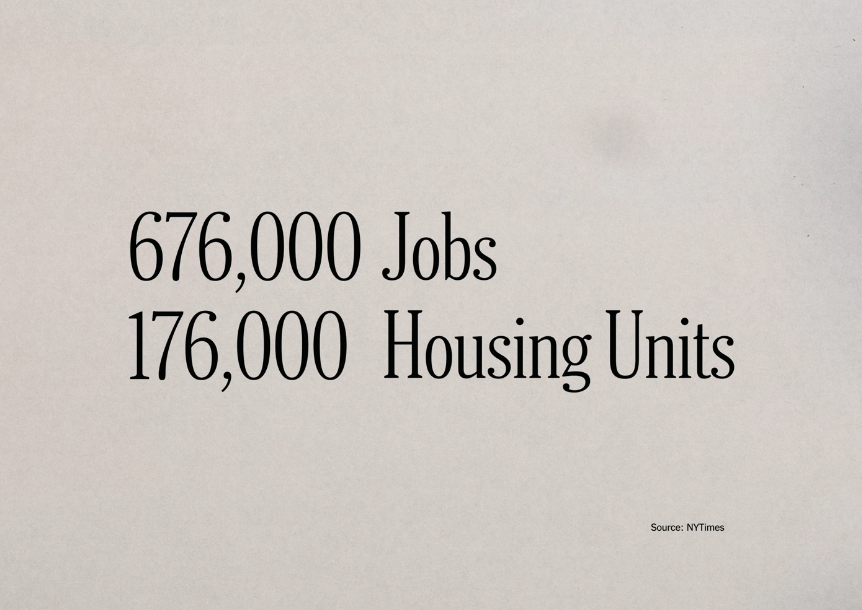 The Bay Area has added in recent years an amazing 676,000 jobs but only 176,000 housing units.  So Palo Alto, he said, voted to change the zoning of one section of the city – on a two acre plot of land and rezoned it to build an affordable housing  project for elderly members of the community.

In response, the liberal members of the Palo Alto community held a vote to overturn the council’s decision and turn it back to low density, single family homes.  It was Palo Alto’s Measure D and it passed 56-43.  So now instead of affordable housing for the elderly, we have large single family homes.  Each of the homes are worth $5 million each.

“I think people aren’t living their values,” Appelbaum charged.  He pointed out that if you go to these meetings, “it’s always the same song and it goes something like this, ‘I am very in favor of affordable housing, we need more of it in this community, however I have some concerns about this project.’”

We hear about harms to the neighborhoods, concerns about the project and the result, usually, “nothing ever gets built.”

“This is happening all over California,” Harris said.  “The result is that these neighborhoods are so expensive that they keep any one out who is not part of this group of super rich residents.  Many of whom bought their properties decades ago and spent their time fighting to keep the value of their real estate assets super high.”

This really could have been written Davis.  So many of the people fighting housing projects – already own their homes, bought them at very low cost back in the 80s and they have reaped huge financial windfalls as the price of housing in Davis has skyrocketed.

Moreover, many of the people fighting things like DISC in 2020, already have their jobs, their careers, or are retired.

They will vote for Biden or Obama nationally, they will talk about things like racism, they may even march in the marches, but when it comes to enacting policies that will create jobs and housing for  people to be able to share in the Davis experience, they oppose it.

As someone who is clearly on the far left, I am very critical of the left on these issues.  There really is no excuse to fall so far short of stated goals.  But in fairness, the NY Times could have done the same piece and focused on conservative states as well.  We will leave that for another time.

55 thoughts on “Commentary: Democrats in California Deserve to Get Spanked On Housing”