Assemblymember Ash Kalra, a former Santa Clara Public Defender, said promisingly, “We’ve gotten a lot of positive change in our criminal justice system, but it’s only happened because the people have demanded it and we still have a lot more work to do.

“Sometimes folks say that the system is broken,” he said.  “The reality is the system is designed exactly how it was supposed to be designed by those that were in power to incarcerate, to create an industry where a lot of people make a lot of money and a lot of families and neighborhoods get devastated. That’s by design.”

He said, “That’s why we have to break that design.”

Kalra noted that “the reality is that here in Santa Clara County, we need to have a prosecutor that actually is leading the charge because we see in LA, we see in San Francisco, Contra Costa, even in San Joaquin county, we have prosecutors, that are on the cutting edge of progressive criminal justice reform, recognizing that yes, people should be held accountable. However, that includes the system. This system has to be held accountable to the people.”

Kalra added, “At the end of the day, you’re never going to get rid of systemic racism, systemic bias, unless you challenge the system itself.”

Assemblymember Kalra this year introduced AB 256 to make the racial justice act which was passed the previous year, retroactive.

“The objective should be to teach people that there are consequences for their actions while at the same time, preparing them to return to society upon completion of their sentence, they should be guided towards re-entry, not deprived of it,” said local defense attorney Leah Gillis.

Founder and director of Silicon Valley Debug Raj Jayadev noted that the rally was a beautiful vision that some of the folks in the jail could see from the inside.

Jayadev called for systemic change, about which he said, “It wasn’t asking for a single law change, a single policy change a piece of legislation. It was to uproot the entire system of oppression that separated families literally here.”

He said, “There’s a system that is not concrete.  That’s not architecture.  That is oppression.  That is racial injustice that is separating our families and communities.”

He said, “We had to flex the power of the movement to fight back.” 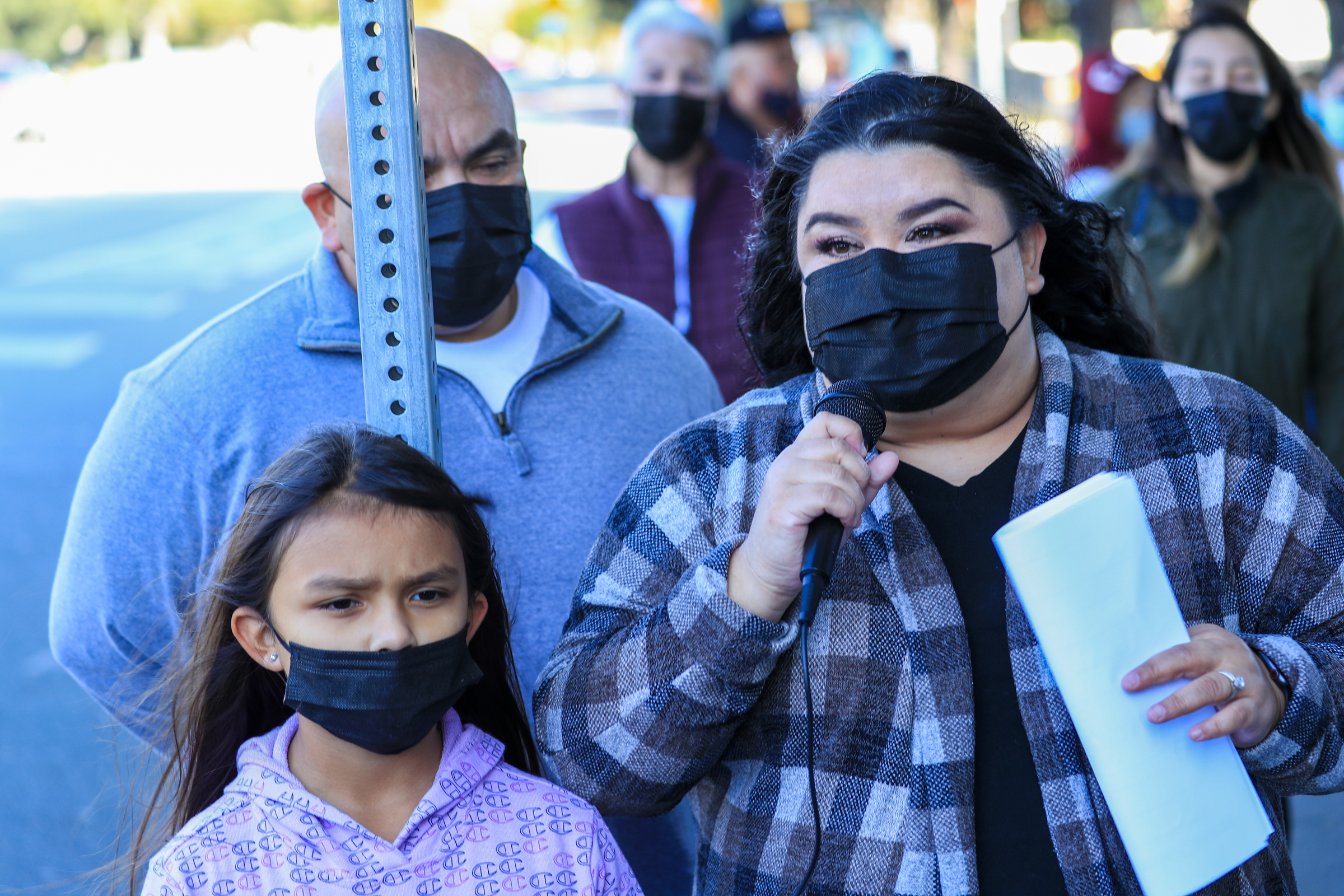 A woman who came up explained that “my husband was looking at 284 years to life in prison with a gang enhancement, third strike, the district attorney was stacking on excessive sentencing.”  Thanks to AB 2942, “my husband is home today.  He came home four days ago.”

Her husband was the founder of Prisoner’s United. 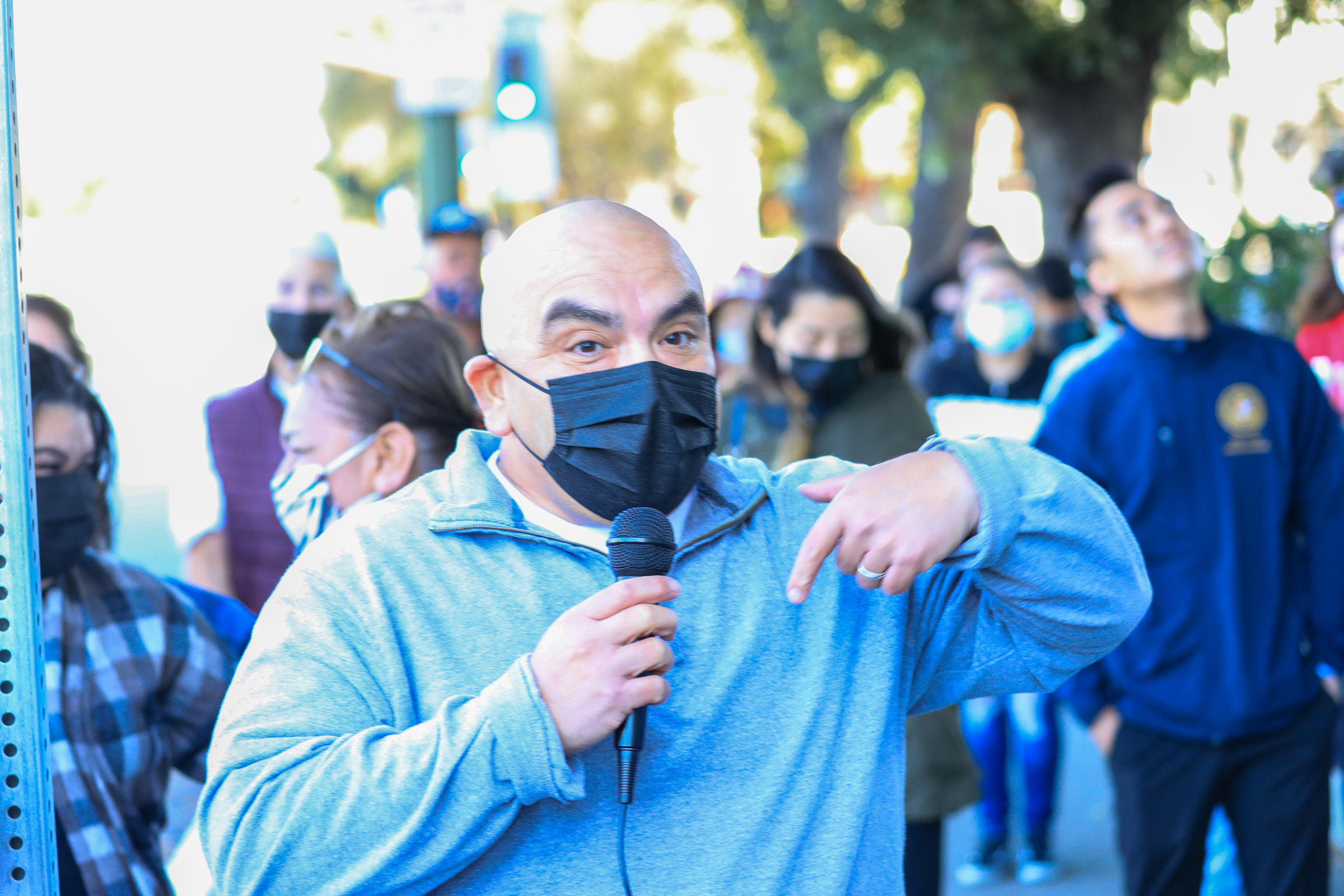 He spoke as well saying, “I told you that when I got out that I will continue this fight, this struggle.  There’s been a narrative that I’ve been hearing, that’s going out there, but the brainchild of this operation started over there. It started into the cell, a cell block.”

Another woman, Raj Jayadev introduced her son, Tony, who had been sentenced to life without parole.

Two years later, he explained, “she’s now initiated a law that is going to bring thousands of people home.” 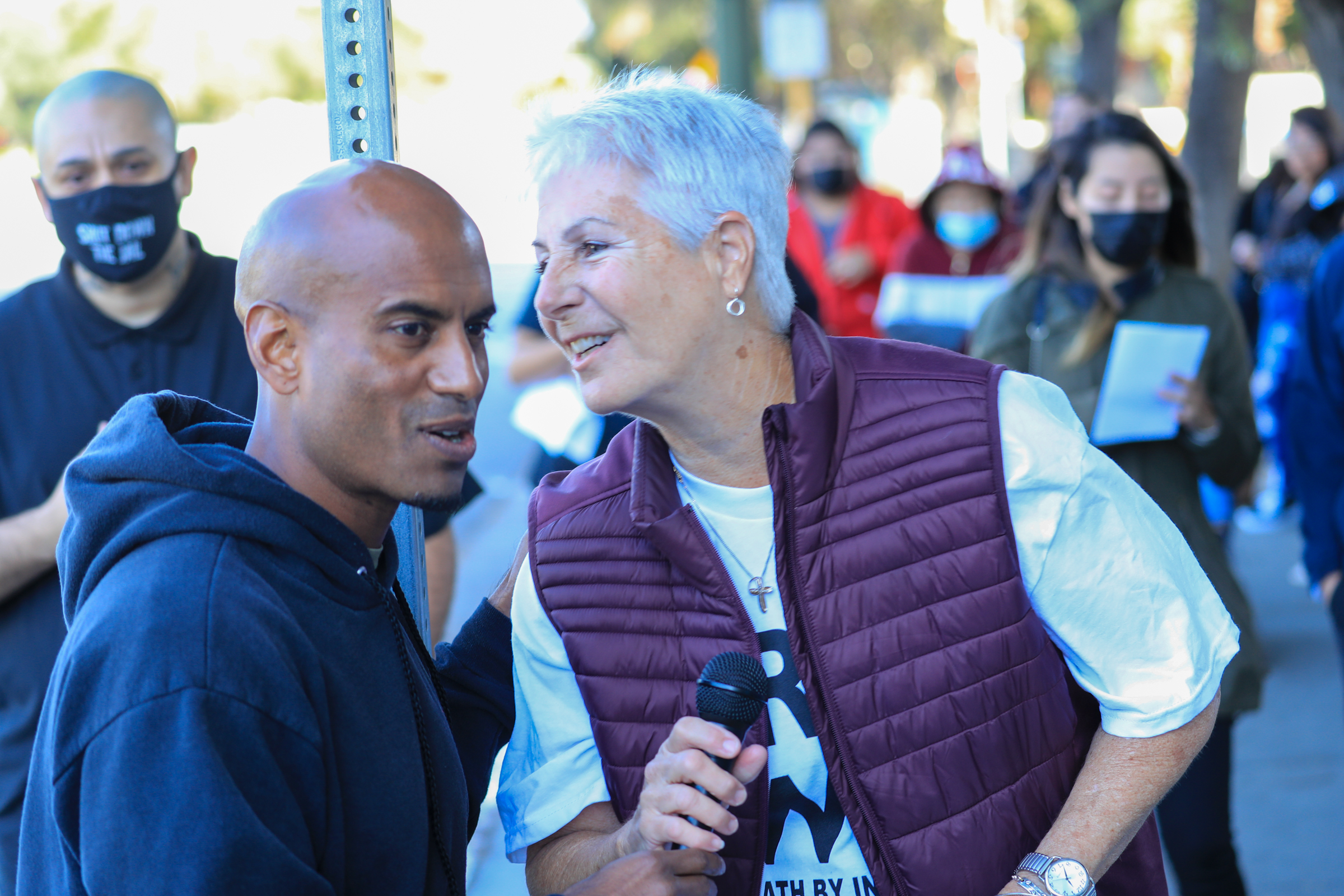 She explained that her son was 20 years old, he was convicted of felony murder, special circumstances, sentenced to life.  “He was supposed to die in prison,” she said.  “Life without the possibility of parole is death in prison.  You can never come before the parole board.”

She said, “This is my only child, and he’d never been in trouble with the law—never even had a speeding ticket.”

She started talking to her legislators about felony murder.  She explained that “none of the bills would touch my son because in order to change special circumstances, you need to have a two-thirds vote in the legislature.”

SB 300, Senator Dave Cortese’s bill would address this by amending the law to ensure that life without parole cannot be imposed on those who were not the actual killer, did not intend the person die during a crime (felony murder).

“He is bravely and courageously taken that and is standing and committed to it, so that people like my son… will not be able to have to be sentenced to life in prison without the possibility of parole.”

Senator Cortese spoke about SB 300.  He said it took Raj Jayadev coming up to him and saying, “Are you aware of this?  And I wasn’t.

The bill now moves over to the Assembly after they recessed until January.  They will need 54 votes.

Cortese said, “How heartbreaking it must be for a parent every minute of every day of every week, to know that your child, your child has been sentenced to life without parole.”  He said, “When you take away possibility from a human being, you’ve taken everything.  That’s all we have is possibility.”

He said, “And today, we have the possibility of overturning that law—and it’s thanks to all of you.”

He explained that he has witnessed a man get sentenced to state prison for four years because he possessed 0.03 grams of crack cocaine.

“That’s smaller than what your eyes can see, because he had a strike prior on his record,” he said. 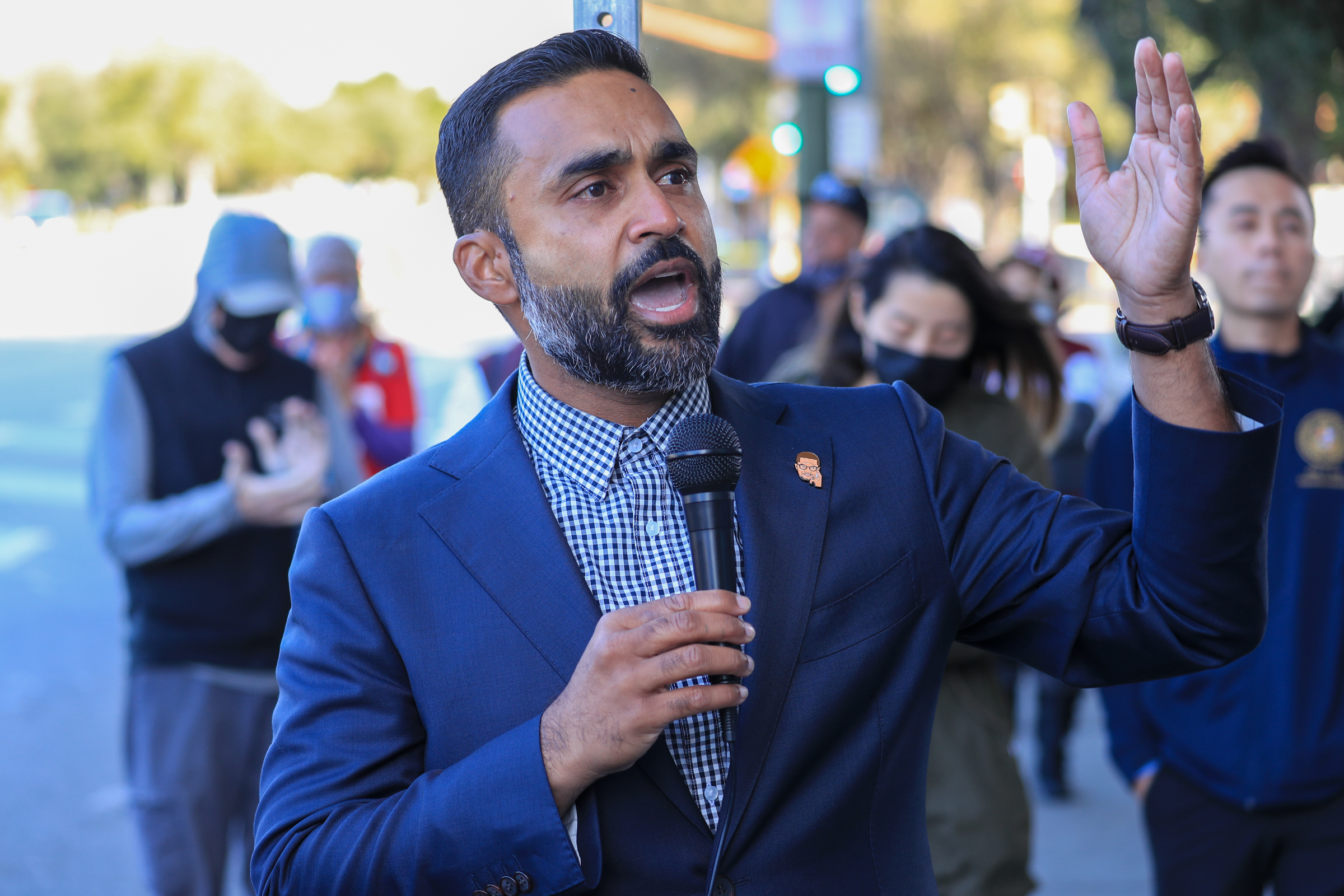 He noted that a young man he had represented at the age of 16, he was talking to him on a Zoom call and told him he was running for DA.

“I was afraid of what he would say,” he said.  “I was afraid that he would believe that my run would be a betrayal to him, his family and our communities, but he looked at me and he smiled. And he said, the DA does not have to be the enemy.”

Assemblymember Alex Lee noted that he and Senator Cortese entered the legislature the same year, “And we hit the ground running on these hard issues of criminal justice reform.”

He said, the movement is up against “the tough on crime era” that “play up every single fear that we have.”

He said that some are trying to go back to this era, “They’ll go out there and they’ll use that baser instinct to make people afraid.” 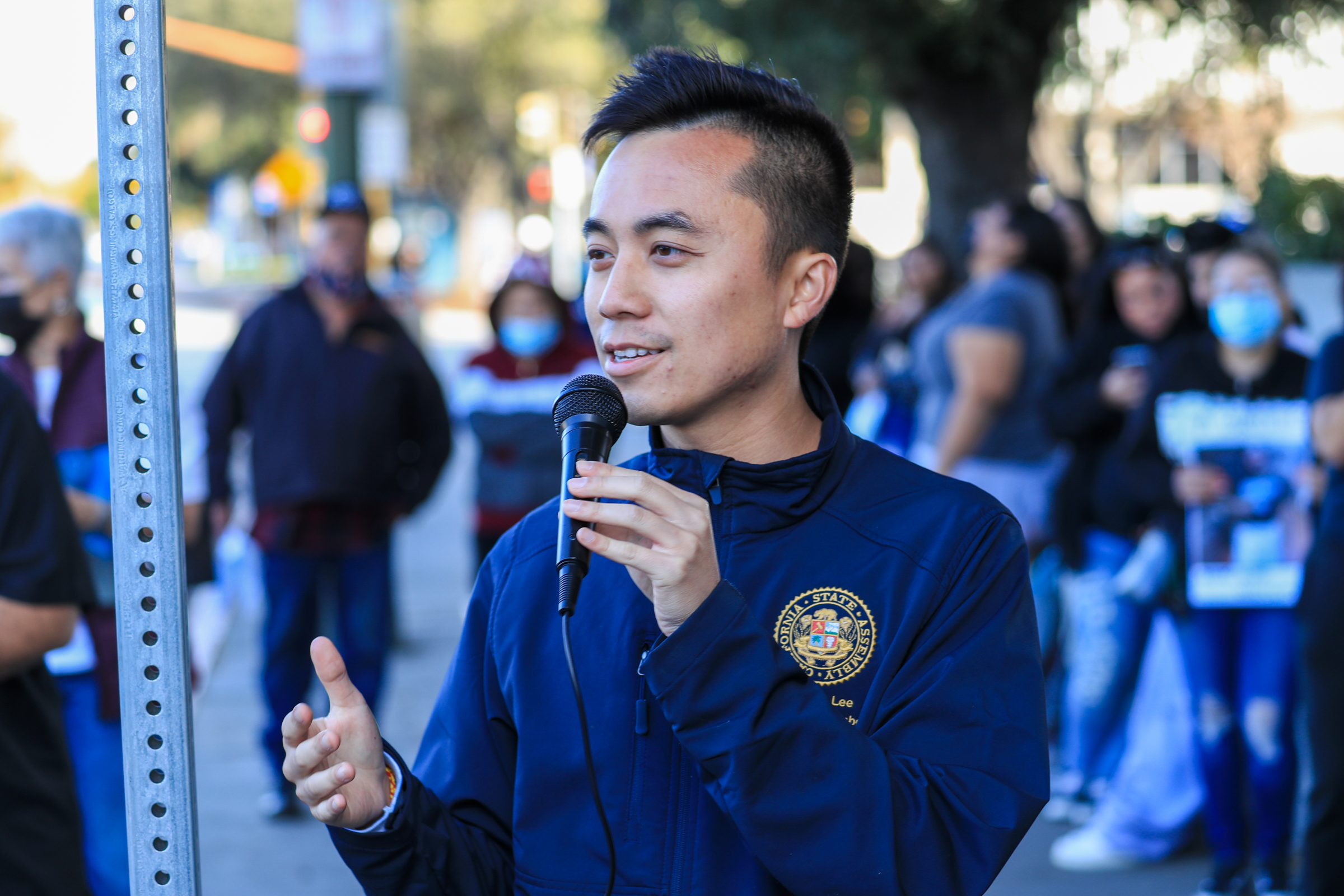 He said, “I will tell you right now, that in Sacramento, you have legislators that are not afraid of their bullshit.”

He said he was very proud to introduce legislation that would end racist enhancements on our people.  Eighty-nine percent of people charged with gun enhancements are people of color.

In response, during the unprecedented time of anti-Asian racism, “Guess what the DA association did?  They parachute into Chinatowns.  And they told people that my bill would make them more unsafe, would make their perpetrators come back and hurt them.

“They are consciously doing these things,” Assemblymember Lee said.  “Law enforcement special interests that go into communities of color, that they divide us from each other.  They make us afraid of each other, distrust each other and make us want revenge.” 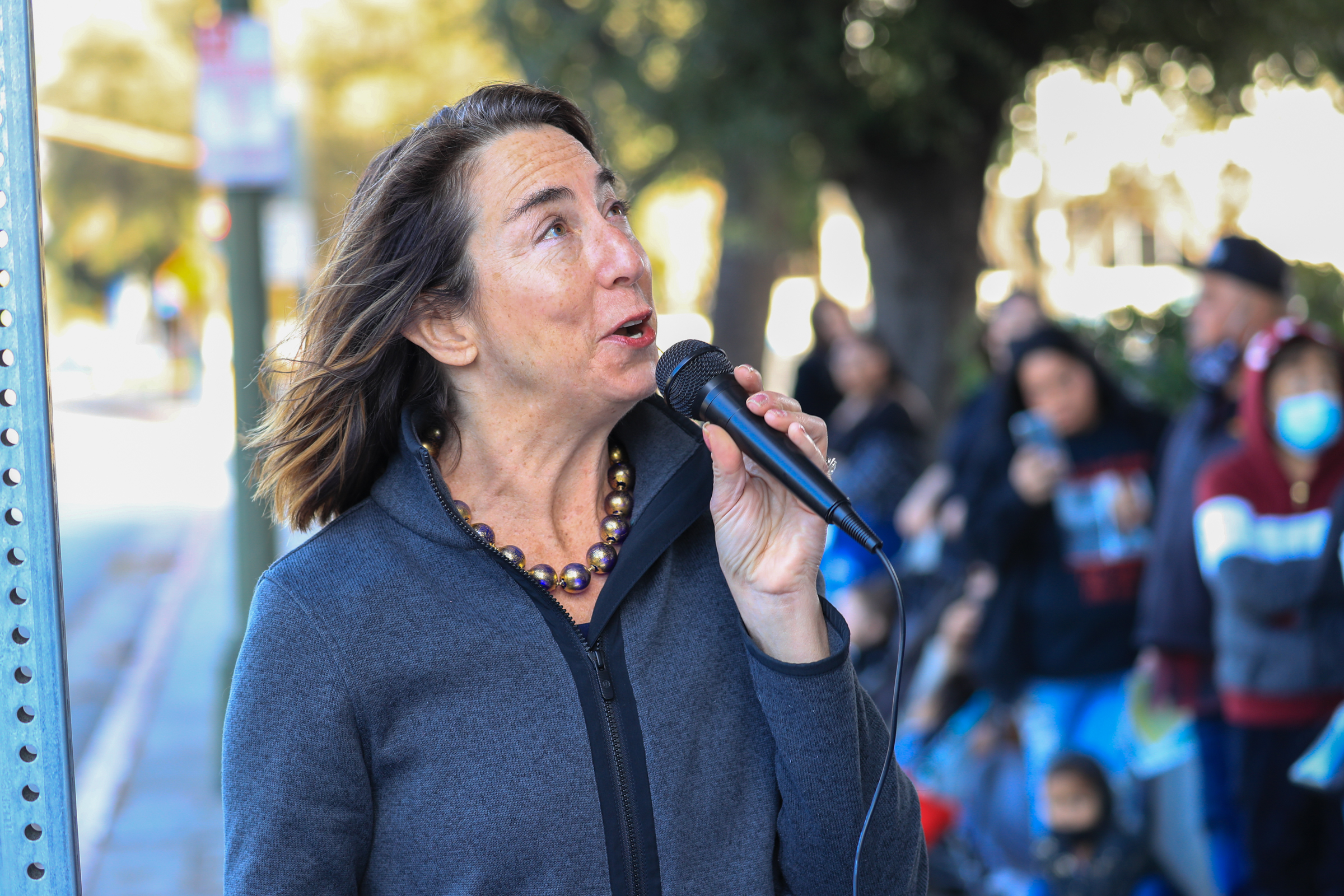 Susan Ellenberg from the Santa Clara Board of Supervisors added, “Today, I’m going to speak about the importance of a county taking substantive steps toward expanding community-based alternatives to pretrial incarceration.”

The vast majority of people incarcerated in our jails are awaiting trial or other dispositions of their cases and have not been convicted of any crime.

She added, “We lock people up while acknowledging that we bear responsibility for setting them along the fabled school to prison pipeline when they were barely more than toddlers.”

She added, “The county’s responsibility is to invest primarily in the systems of care, over systems of punishment.”