The Times feature UC Santa Barbara student Kris Hotchkiss, who they report has “to endure a leaking roof, soggy bedding and power failure that shut down the ceiling fan, refrigerator and lights for six weeks. He has no shower or toilet.”

Why”  “That’s because he lives in a van — the only affordable shelter he could find.”

(My reaction was: now that’s a megadorm.  Lincoln40 looks like a luxury hotel compared to that.  Actually at times it just looks

The Times writes that “the more urgent problem is a campus affordable housing crisis hitting thousands of students across California’s three public university systems — leaving some unsheltered, others with mounting debt burdens and many filled with anxiety and stress.”

We got a respite for a year from the student housing crisis across the state, but now it’s back and apparently worse than ever.

The Legislative Analysts Office issued a report on November 8 to Assemblymember Kevin McCarty, who Chairs the Subcommittee on Education Finance. 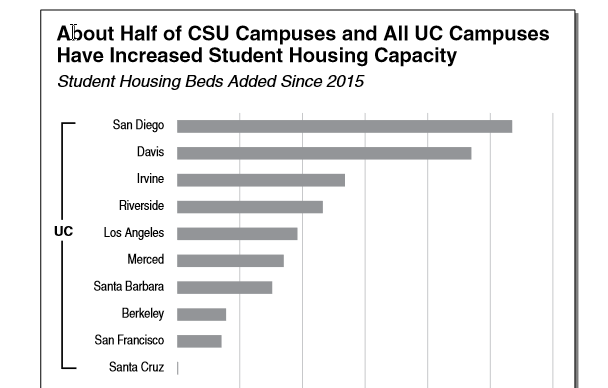 UC Davis has added the second most housing capacity in the system behind only UC San Diego.

One problem—housing capacity has only slightly outpaced enrollment growth. 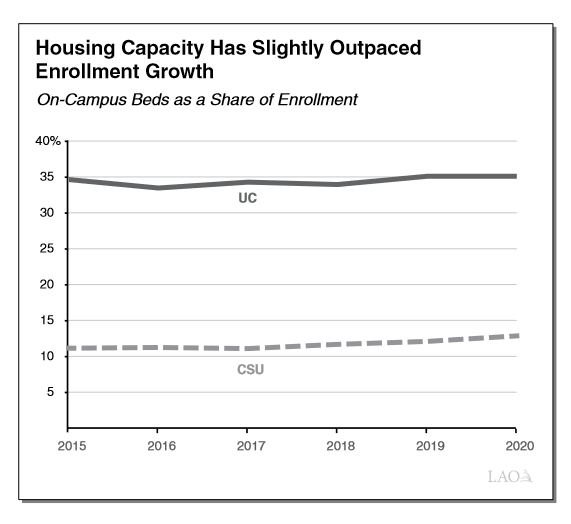 According to the LAO, “UC does not systematically collect data regarding on-campus housing charges. Campus officials emphasize, however, that their housing charges are intended to be below market.”

However, that has not been our experience—and indeed, the LAO recognizes that.

“Despite campuses aiming to have below-market housing charges, students living off-campus report paying less on average for their total living costs than students living on-campus,” the LAO finds. “Off-campus students have somewhat more control over their living costs in that they can choose to have more roommates or scale back on food expenses.”

In the meantime, an Assembly subcommittee memo reports that of the California Community colleges, only 12 of 116 campuses have housing programs, which shelter 2,400 students.

A memo from the same Assembly committee notes: “Student housing has rarely been a discussion point for this subcommittee, as the state does not traditionally support housing costs and has left campuses and the systems to develop and support their own housing programs, supported by student rent. Given the state’s housing crisis, however, that is changing.”

They continue: “In urban areas, local market rental rates – among the highest in the country – are forcing students to pack into apartments or homes, and in rural areas, many campuses do not have enough local housing to accommodate current or future enrollment levels.”

The result is catastrophic: “Homelessness is prevalent across California’s three higher education segments, with 1 in 20 students at UC, 1 in 10 students at CSU, and 1 in 5 students at California Community Colleges (CCC) reporting experiencing homelessness at some point during the academic year.

“Even more students experience some form of housing insecurity.”

The LA Times notes: “The campuses traditionally weren’t meant to offer residential life for commuter students. But the need is so high, with 20% of community college students reporting homelessness, that 81 colleges have submitted applications for new state housing grants to plan or construct dorm projects.”

Kevin McCarty told the Times that increasing student housing was now a key legislative goal as they continue to seek ways to boost UC enrollment to qualified California students—“tens of thousands of whom were rejected by their campuses of choice this year.”

The Times reports, “That concern prompted him to help secure the state’s first substantial contribution to student-housing projects this year, amounting to $2 billion through 2023-24, for the UC, Cal State and community college systems.”

“We have a housing crisis in California. We have a student affordability issue. And there’s a legislative push to dramatically expand enrollment for California students,” McCarty told the Times. “So we think it’s smart for us to get in the business of helping build more student housing.”

But barriers remain to student housing.

The Times cites a Santa Cruz family complex which was set to open but due to litigation, “we have yet to put a shovel in the ground,” Chancellor Cynthia Larive told Assembly members.

As usual, “opponents argue that UC has not adequately examined the impact on traffic, for instance, or the natural environment, such as an iconic meadow at Santa Cruz.”

In Santa Barbara of course, UC Santa Barbara believes that the mega-dorm project is crucial to addressing housing needs and this would in fact add 4,800 beds by 2025.

The problem isn’t the project, but protesters hate the design by billionaire Charles Munger, who pledged $200 million for the project.

“The proposed 11-story structure would house some 4,500 students in a warehouse-size building where about 94% of the units do not have windows,” the Times writes.

While I am somewhat skeptical about complaints, this one seems legit.

All of this is to show that the problems in Davis are not exclusive to Davis.  The state may kick in money for housing, but it is still going to be up to the local communities to address housing needs.