By Jake Wylie and Tiffany Thai

During the COVID-19 pandemic, inmate releases to alleviate confined prison conditions made the disease less deadly.

And, coincidentally, the pandemic releases show confinement and bail are not always necessary to have offenders return to court.

In June 2020, West Virginia enacted HB 2419, which authorized judges to use their discretion when assigning bail by using the least restrictive bail conditions for non-violent offenders such as misdemeanors and allowed release based on personal recognizance bonds.

Personal recognizance bonds allow an individual to be released from jail without the condition of money bail but must return to appear in court at a later date.

HB 2419 was enacted during the COVID-19 pandemic and is an example of why cash bonds may not always be a necessary, claim no-bail proponents. 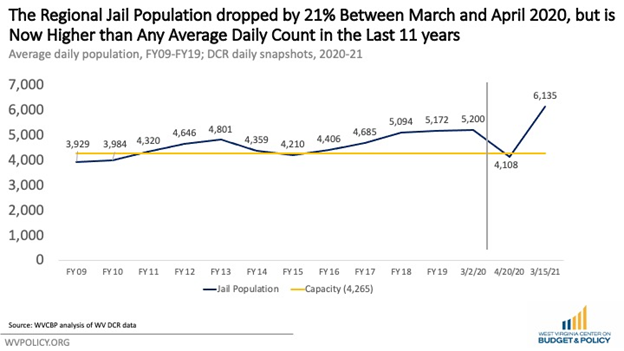 The pandemic also led Kentucky to release many people from jail in early 2020 through a program started in 2015 called Administrative Release.

As deputy public advocate for the Kentucky Department of Public Advocacy, Scott West told WV Public Broadcasting, Administrative release is an automatic process, requiring no judge, for certain crimes. Since its inception, the program has been expanded state-wide and includes certain nonsexual and nonviolent felonies.

“So, almost, you know, a fourfold increase in the number of people who are released on AR,” Spalding told reporters.

According to Spalding, the data gathered from administrative release flies in the face of the argument that bail reform would reduce public safety.

Spalding released a report in 2019 called “Disparate Justice: Where Kentuckians Live Determines Whether They Stay in Jail Because They Can’t Afford Cash Bail,” which shows huge inconsistencies regarding bail, like how simply crossing a Kentucky county line can have a drastic impact on whether one is released with money bail or not.

For instance, her report shows that on the west side of Kentucky is McCracken County with the lowest measured rate of pretrial release on non-financial bond at five percent.

McCracken County borders Marshall County, with a rate of 51 percent. And on the other side of the state is Martin County, with the highest rate of 68 percent.

“It’s so disparate,” Spalding told WV Public Broadcasting. “40 percent of cases result in release without financial conditions, which is too low.”

Spalding explained that from the looks of the data on administrative release since the pandemic began, “it really shows that the release of more people is in line with our public or community’s safety goals.”

Additionally, the Ohio Supreme Court’s announcement requires release on personal recognizance as the first option before finding bail is necessary.

In Ohio, Anthony Body is a bail disruptor for the Bail Project in Cleveland, Ohio. In an interview with WV Public Broadcasting, Body stated his work was “a bail disruptor, we’re just here to disrupt the system.”

In his interview with Orsagos, Body said he typically received a list of potential clients from a public defender and then goes into the jail to meet with as many of those people as possible, typically 20-30 clients.

Body then interviews those clients, and if they are eligible, the Bail Project will pay the client’s bond at no cost to the individual. Following release from jail, Body also stated that he provides “wraparound services to his clients like court reminders, transportation assistance, referrals to social services and community resources.”

The New Jersey Criminal Justice Reform Act (CJRA) took effect on January 1, 2017. From that day forward, anyone charged with a crime (except for those facing life imprisonment) would not be held in jail before their trial.

Rather, police officers have two choices after arresting someone. They can either issue a warrant and take their suspect to a police station, or they can hand them a summons telling them where and when to appear in court for a hearing held within one or two days of the arrest.

At a court hearing, a judge reviews the individual’s Public Safety Assessment (PSA). But the PSA isn’t the be-all-and-end-all consideration, said Alex Shalom, director of Supreme Court advocacy at the ACLU.

The judge also hears arguments from a prosecutor and defender at each part of the process.

“Theoretically, the judge is also allowed to consider financial, money bail,” Shalom told reporters. “[B]ut money bail can only alleviate the concern that you won’t show up. Money bail cannot be used to protect the public or to prevent obstruction.”

The CJRA has its origin in 2013, when a report produced by Luminosity and the Drug Policy Alliance analyzing New Jersey’s jails.

That report, called “Identifying Opportunities to Safely and Responsibly Reduce the Jail Population,” found that prison populations were overwhelmingly (71 percent) Black or Hispanic; and that half of the populations were imprisoned for nonviolent, nonsexual, and non-weapon-related crimes.

Perhaps the most damning of the report’s findings was that nearly 40 percent of the population was only there because they did not have the money to post bail – and could be released, if only they could afford it.

Calls for reform after the report’s release led to the creation of a committee tasked with investigating just what to do about New Jersey’s prisons.

“The only way to fix the system would be to reimagine it,” said Shalom, one of the committee’s members.

“[T]o transform it from a system that made its initial decisions about freedom or detention based on resources, to one that made those decisions based on a perception of risk,” he told reporters. That transformation led to the CJRA.

After the CJRA’s first year, the ACLU of New Jersey reported that nearly 70 percent of people were issued summons instead of warrants, and nearly 60 percent of those who were issued warrants were released after their first appearance in court. Only six percent who were issued either a summons or warrant were detained.

But Shalom told reporters that these positive results don’t negate the work that still must be done. “Our jails remain disproportionately Black and Brown,” Shalom said. “And it’s still important that we have several thousand fewer people in jail now than we did before.”

Anti-bail proponents note the money bail system continually needs reform, but the COVID-19 and personal recognizance release demonstrate that bail is not necessary for nonviolent offenses.