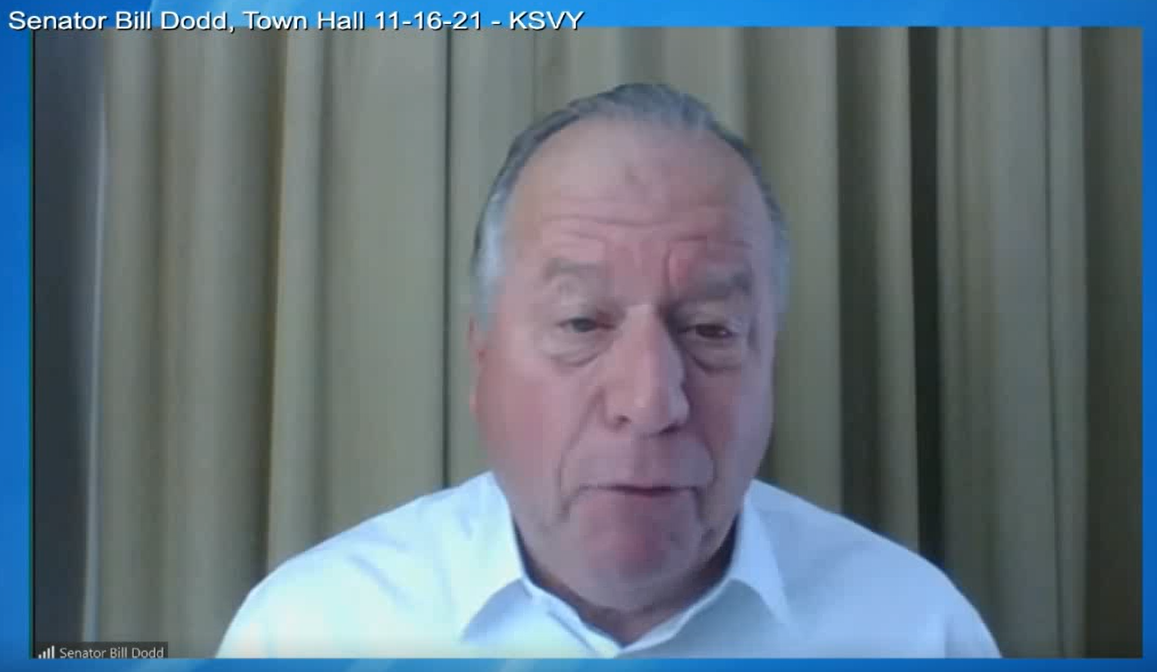 Senator Bill Dodd on Tuesday held a townhall meeting on Race and Equity and the Criminal Justice System.  The event presented in partnership with Sonoma TV features Secretary of State Shirley Weber, who while in the legislature authored California’s groundbreaking use of force bill, Senator Steven Bradford who authored the police certification bill, and UC Davis Law School Dean Kevin Johnson.

“We still must address racism and disparate impacts here in America,” Senator Dodd said.  “Every human being should be able to feel safe, be treated fairly and have access to equal justice.

“Last year’s videotape murder of George Floyd by a Minneapolis police officer underscored a shameful reality, the nine minutes and 29 seconds that Derek Chauvin pressed his knee into George Floyd’s neck underscored the fact that

prejudice and official misconduct are alive in our country and its institutions.”

Senator Dodd said, “Policing is an area, especially in my view that needs reform.”

He explained, “We know black and Latino people are more than likely than white, more likely than whites to be pulled over and treated unfairly by police. They are also more likely to be incarcerated and they are shot and killed by police at a much higher rate than any other ethnicity. And that’s just wrong.”

He noted that not only is it occurring all over the country, but it has occurred in Vallejo in his district, where police shot and killed Sean Monterrosa a week after Floyd’s killing, “Sean had no gun and was actually on his knees at the time.”

The Senator added, “Ignoring the problem is a disservice to everyone, including the police.”

Shirley Weber pointed out that she authored legislation on the issue of racial profiling, “because we didn’t have data” and “now we have the only mandated racial profiling bill in the nation that requires every officer to record who he stopped, why he stopped (them)… so we can get the information and data to understand why so many individuals are being stopped.”

Weber also explained her groundbreaking use of force bill.

“I was surprised to learn that the standard for the use of lethal force was when people considered it reasonable rather than necessary to save your life,” she said. “When you decide to use deadly force, it should be because your life is threatened or someone else’s life is threatened, or this person has the capacity to do more harm.  If that’s not the case, then you should use other methods, de-escalation methods.”

Weber also pointed out that unlike a lot of other states, “California’s tried to open up voting as widely as possible.”

Prop 17 passed overwhelming by the voters in 2020, “opened up the opportunity for close to 50,000 folks who were on parole to be able to vote.”

“Right now in California,” Weber explained, “the only person who can’t vote who’s a citizen is a person who is physical sitting in a federal or state prison in California.  Even if you’re in a California jail, you are eligible to vote.”

“California now joined 46 other states that has a big and transparent and open process to get rid of bad officers,” Senator Bradford said.  “We have a process to decertify or remove or take the licenses from almost 200 professions here in the state of California, all, but the exception of law enforcement.”

He said, “Now with the passage of SB two, we can now decertify those bad actors.”

Most of the people he said who put on the uniform “do that job in a respectful and honorable way.”  He said, “It’s the bad actors who leave such a level of distrust and fear.”

He pointed out that while “what really gets the most attention is the brutality and killings is exemplified by the killing of George Floyd and Brianna Taylor. They deserve our attention. They truly deserve our attention, but we can’t forget the less spectacular, more mundane, but systemic daily racism that affects our criminal justice system that leads to disparate enforcement, disparate incarceration rates, and destroys people of color communities of color.”

Johnson noted, “We have problems with what the law criminalizes and what it punishes.”  He cited as example, the huge disparity between punishment for crack cocaine versus powder cocaine.

He also pointed out the trial for the men accused of killing Ahmad Arbery.  In a county that has 25 percent African Americans, “there’s only one Black juror” out of 12 regulars and four alternates.

“You have a judge in that case saying, it appears that the defendants, the white defendants engaged intentional discrimination in trying to strike and striking people from the jury.”

The panelists were asked about qualified immunity.

“The challenge is getting the legislature to do it,” said Shirley Weber.  She noted with SB 2 all the concessions and adjusts that had to be made to get these bills passed.  “It’s not eeasy to do even in California, with its very liberal, supposedly liberal legislature.”

She said, “it is still not necessarily an environment where you can walk in and just sit down and make these changes that everybody knows needs to happen.”

She added, “We still don’t have a body camera policy in the state of California.”

“It’s not that we don’t recognize the need for it,” she said.  “The law enforcement still has a huge lobby and a very massive lobby. And I was informed when I did AB 392, which is a bill that’s most simple bill that says you can’t use, you shouldn’t use meet the force unless necessary.  My understanding is that about $1 million was spent on attacks on me, in trying to discredit my credibility.”

Senator Bradford, “The things that make the most sense are usually the hardest to do.”

He added, “Here we are with super majorities in both houses. And sometimes now it’s challenging to get something across the finish line then when you had 55 in the Assembly and only 26 in the Senate.”

The Senator also talked about the difference between law enforcement in communities of color versus affluent community.