Los Angeles, CA – “My message to anyone thinking about coming to Los Angeles, especially during the holiday season, is don’t,” Jamie McBride, the head of the LA Police Protective League, the union representing LAPD officers, said in a television interview.

My immediate reaction was this is 2021, we know that Los Angeles was far less safe in the 1980s and 1990s.  Not even close.  Clearly this is hyperbole on the part of some on the LAPD.

As an NBC report puts it, “The numbers tell one story, but recent messaging from the Los Angeles Police Department appears to be telling another.”

In short, “Robbery, burglary and theft are down in Los Angeles compared to 2019, according to the latest crime data from the police department.”

This is similar to what we are seeing elsewhere as well.  High-profile cases grab headlines and attention.  In LA it was the arrests of 14 people in smash and grab crimes from November 18 through November 28.  But anecdotes are not data.

That’s why it is important to look at data.  The data shows a more complete picture of what has happened in theft per month in LA since 2015. 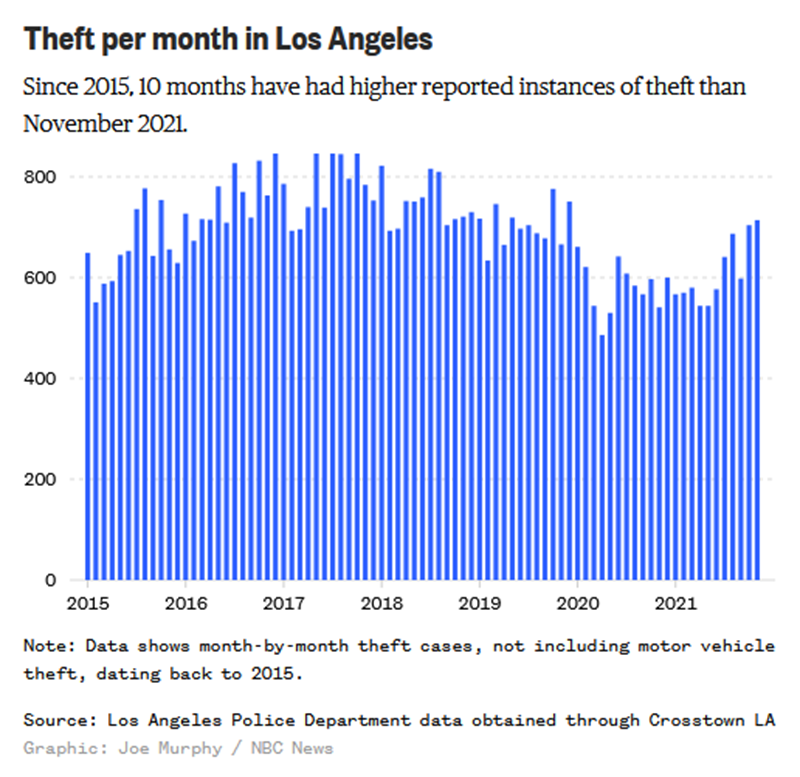 What appears to have happened is a few things – in 2015 the theft per month was trending upward, but that peaked in about 2016-17, and started trending downward, it then plunged in early 2020 with the pandemic and this year it has trend back up, but it is still below the peak months.

Gabriel Kahn, a journalism professor at the University of Southern California Annenberg School for Communication and Journalism and editor of the data-driven news site Crosstown LA, compiled this data and found that many were worse than November 2021, “some far worse.”

“These types of crimes that Moore is talking about are generally either robbery or shoplifting,” Kahn said. “Both are down since Covid. That doesn’t mean that there haven’t been high-profile, big-haul incidents.”

“But the department says coordinated thefts are on the rise and worth its full attention,” NBC reports.  “Police leaders argue the recent wave has been unprecedented and overwhelmed retail workers and shoppers with a sense of helplessness.” 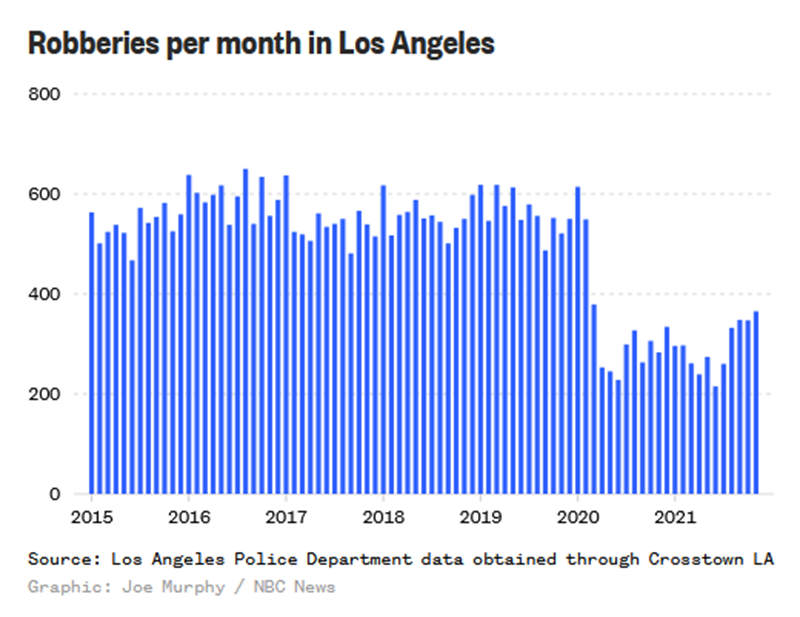 Meanwhile, robberies appear to be way down since the pandemic.

NBC talks with Alliance for Safety and Justice founder and President Lenore Anderson, who said, “She sees the LAPD’s framing of recent crimes as another hurdle on the path toward less incarceration, greater racial parity in courts and boosted government spending on things other than badges and guns.”

But overall the trend in Los Angeles looks like a lot of trends in lots of places.  Violent crime is up, up 4.1 percent since 2019.  But robbery is down.

It is really too soon to know if this is an aberration from the pandemic or an actual reversal of a long trend.

Moreover, murder as we have pointed out is up across the board.  Those looking for meaning in the murder rate or a cause and effect, can take note of the fact that it is up in places that have traditional DAs – which is most places, it is up in red state and blue states – there seems to be no causal connection between policies and murder rate.

Where does that leave the crime picture?  It is largely to be determined.  Clearly the brazen nature of some of the smash and grab/flash mob type jobs have grabbed media attention and, along with it, that of public officials, but right now the data itself suggests we are kind of in flux.  It could be mere noise on a fluctuating but long-term downward trend of crime or perhaps it is a new trend that will reverse some of the loses.

I tend to believe demographics work in favor of this being a blip – a declining number of youths should over the long term bring crime trends downward.

3 thoughts on “Commentary: Amid Panic about Crime Waves, Data Continues to Downplay”