Sacramento, CA -For nearly two years, the Committee on Revision of the Penal Code has undertaken an intensive investigation into California’s criminal legal system and this month they have released a sweeping report most notably to repeal the Three Strikes Law and create a review process for people serving LWOP (Life Without Parole).

The committee in its report noted that its recommendations are unanimous and “placed a particular interest on sentences for felony ofenses, the area where the most serious punishments occur.”

Strikes law.  Create a review process for people serving sentences of life without the possibility of parole.

The group recommends: “The Three Strikes law has been applied inconsistently and disproportionately against people of color, and the crime-prevention efects the law aimed to achieve have not been realized.”

Because they believe this is a difficult goal, they offer secondary reforms as well, including a five year “washout period” where prior offences older than five years cannot be counted as strikes.  Second, establishing that juvenile adjudications cannot be counted as strikes.  And finally, disallow the doubling of sentences for prior strikes when the new offense is not serious or violent.

That figure represents about one third of the total prison population and 80 percent of those sentenced under the Three Strikes Law are people of color. 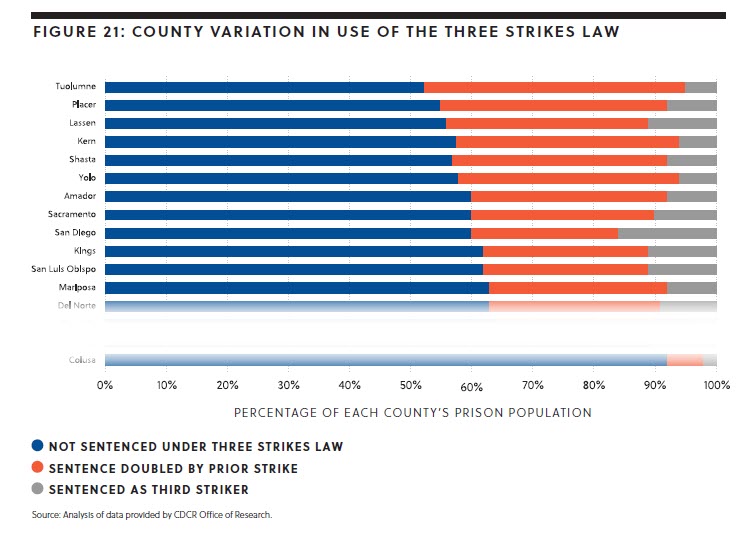 The county disparity is interesting.  Yolo County for example is sixth in the state in terms of most people sentenced either as a second or third strike. 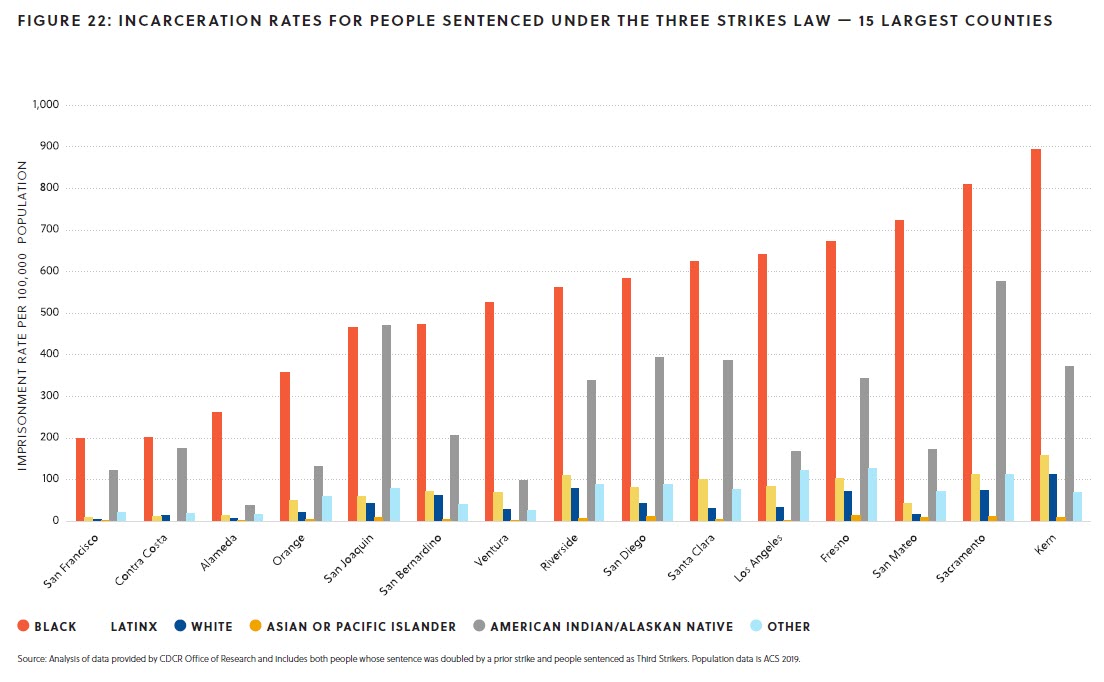 The report concludes: “Given the discretion that prosecutors have to charge and judges have to dismiss Three Strikes enhancements, this data suggests a disturbing trend: when the criminal system has the option to punish more harshly, it does so disproportionately against people of color.”

“Concerns that the law disproportionately impacted people of color began a few years after it was passed.181 People of color, particularly Black people, are arrested and prosecuted at disproportionate rates,182 and the Three Strikes law perpetuates these disparities by subjecting people to harsher penalties once they become justice-involved,” they continue.

The report also finds those disparities in LWOP sentences, “Life without the possibility of parole sentences have become much more common in California and have disturbing racial disparities without demonstrated benefit to public safety. “

The Committee therefore recommends the following:

“Once rarely used,” they write.  “there are now over 5,000 people serving life without parole sentences in California prisons.”

The overwhelming majority (96%) of people sentenced to life without parole in California have been convicted of first-degree murder — which generally requires a willful, deliberate, and premeditated killing — with an additional “special circumstance.”

Special circumstances was created in the 1970s “to identify murders that deserved the harshest punishment.”  But that list of seven circumstances has expanded to 21, “seriously diluting the law’s ability to separate more serious offenses from others.”

“The availability of special circumstance charging to nearly every murder places tremendous discretion in the hands of local district attorneys, but very little is known about how prosecutors decide to charge special circumstances,” the report finds.

Michele Hanisee, President of the Deputy District Attorney Association of Los Angeles County, told the Committee that “prosecutors are not always aware of all the circumstances — such as whether the defendant is a victim of abuse or trauma — relevant to whether a life without parole sentence should be pursued.”

Share:
Tags:Committee on Revision of the Penal CodeLWOPRacial DisparitiesThree Strikes
Previous : Guest Commentary: Re-Entry Into Society Can Work, As Long As You Make It Work
Next : Commentary: Would the Council and Voters in Davis Support Broader Affordable Measure J Exemptions?