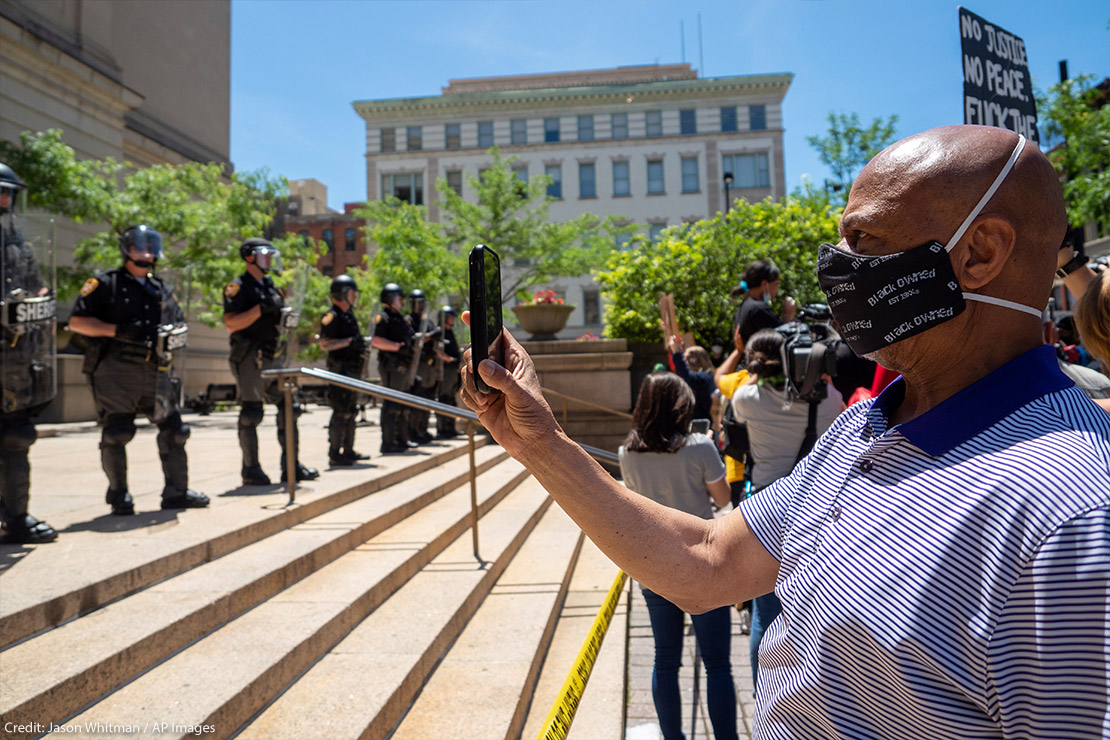 It is critical that the courts maintain robust First Amendment protections for people to record, share, and stream police interactions. Our ability to speak about police abuses depends on it.

In 2018, Dijon Sharpe, a Black civil rights activist in North Carolina, was the passenger in a car that got pulled over by two police officers. Having previously experienced a violent beating by police officers during a traffic stop, he began livestreaming the interaction on social media. The officers on the scene told him he wasn’t allowed to livestream, and tried to physically obstruct the stream by seizing his phone from his hand. Mr. Sharpe filed a lawsuit arguing that the officers had violated his First Amendment right to record and livestream the police.

The right to record police conduct — without which the public’s right to criticize the government and expose government misconduct or systemic abuse would be considerably weakened — has been widely upheld by the courts. But the district court in this case drew a line between recording and livestreaming, concluding that, while the First Amendment may protect the right to record, it doesn’t protect the right to livestream. And it also held that, even if the First Amendment protects bystanders, it doesn’t protect passengers during traffic stops.

As we argue in a friend-of-the-court brief filed last week, the district court was wrong on both counts.

People have been recording persistent, horrific law enforcement violence against Black people and other people of color for decades. Notably, a bystander recorded LA officers beating Rodney King on a Sony video camera almost 30 years ago. Last year, bystander video of Minneapolis police killing George Floyd played a key role in Black Lives Matter protests that spanned more parts of the country and involved more people than any public movement in recent U.S. history. And years of Black-led organizing in the wake of such bystander videos has generated widespread calls — which the ACLU supports — to shift many roles and resources away from policing and into reinvesting in Black and Brown communities.

Livestreaming has also been part of our public discourse for decades. It’s as old as TV and radio news. Indeed, news reporters are perhaps the “bystanders” we are all most familiar with, and they regularly report live — including from the scene of breaking news. These broadcasts are protected by the First Amendment: Speech is protected regardless of medium, and the choice of when to publish is part of freedom of speech.

The significance and necessity of protecting livestreaming has only become clearer since internet-connected phone cameras have come into widespread use, and the rise in social media has helped bring cases of police abuses to public light.

In 2016, Diamond Reynolds, Philando Castile’s girlfriend, famously livestreamed the moments immediately following Minnesota police fatally shooting him. In doing so, she shared and preserved the horrific reality of a deadly police interaction. And, had she not been livestreaming, the footage might never have made it to the public eye, because police handcuffed Diamond during her livestream, causing her phone to fall to the ground. Because she was livestreaming, however, the conduct and words of the police were still shared and preserved after the phone fell.

This is not uncommon. Although they can go to jail for it, officers sometimes seize or destroy phones, memory cards, and cameras, meaning that livestreaming may be the only option for sharing footage. This includes during traffic stops, which are the most common contexts in which people interact with — and are abused by — law enforcement in public.

Protecting the rights not only of bystanders, but also of those involved in the police interaction is critical. While the most comprehensive and easily shared recordings often come from bystanders — and those recordings can spark or support nationwide calls for justice — people who are part of the police interaction itself are even more vulnerable to experiencing violence and not being able to document it. And they have a unique perspective to share.

Recording and livestreaming interactions is a critical tool for communities that are over-policed and disproportionately targeted by law enforcement because it often serves as the only “proof” that police misconduct has occurred. Police body cameras, which were originally intended to increase transparency and police accountability, are not an adequate substitute for civilian-captured videos. Too many jurisdictions have not enacted good, enforceable body camera rules, giving police officers considerable discretion to frequently switch off those cameras, block them intentionally during unlawful action, or make it difficult to retrieve the footage later on. Even if the footage works as intended, captures all conduct, and is preserved and turned over properly, footage is often illegitimately withheld from the public. And even if preserved and released to the public, police body cameras inherently capture the point of view of the police, not of those who are being policed.

Recordings and livestreams have contributed to a growing societal understanding of how frequently this type of violence occurs against the Black community and other over-policed communities of color. Such footage is by no means a perfect safeguard — for every violent police interaction that goes viral, many others occur without being documented. But that makes protecting the First Amendment right to record and livestream those that are captured all the more important, as it sheds light on at least a fraction of existing abuses. It is critical that the courts maintain robust First Amendment protections for people to record, share, and stream police interactions. Our ability to speak about police abuses depends on it.