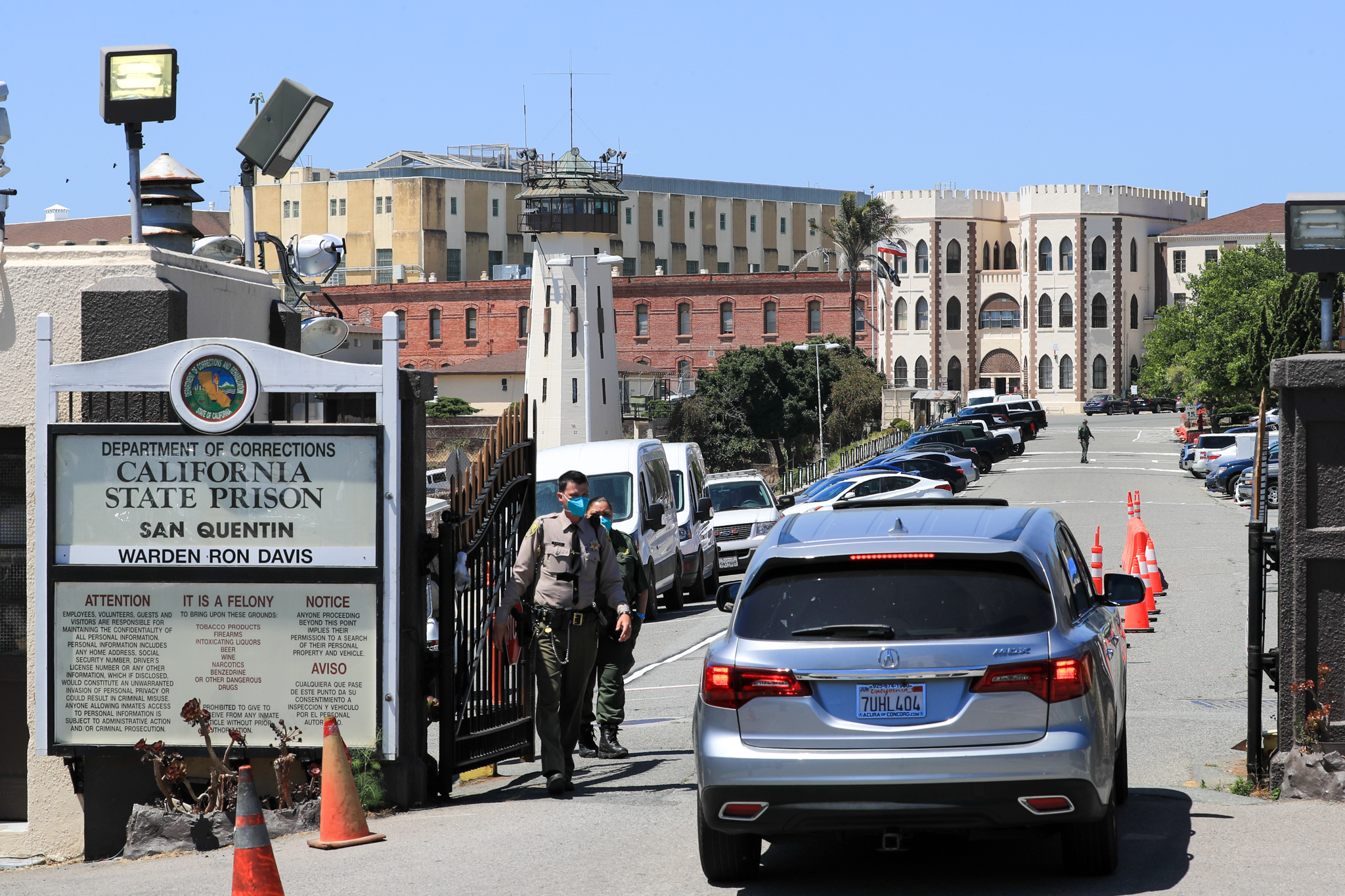 Inmates returning from visits on Friday, December 31, 2021, said they saw a flatbed truck and a forklift unloading supplies such as bunks taken to the Protestant chapel.

“I saw portable showers and restrooms driven across the yard this afternoon,” said Ahmad Rasheed, 68, on New Year‘s Day. “It looks like a repeat of 2020.”

Inside the prison’s West Block, four inmates who attend Christian services were gathered to discuss whether they would be allowed to join at church services the following Sunday.

Although not visible, the generator supplying power to the portable facilities can be heard from the prison’s lower recreation yard. It too is sound hauntingly eerie of the days when tents were placed on the yard to quarantine prisoners.

Like the COVID-19 outbreak nearly two years ago, no word, memorandum or flier explained the situation or anything that was happening at the prison. No information had been disseminated to prisoners. There was speculation that California Prison Industry Authority was also ready to

place bunks in its facility as part of a surge mitigation plan.

“Modified Program” is noted on the prison’s December 23 (2021) Daily Program Status. Reports. (DPSR), which reads, in part: “…the San Quentin Medical Department initiated quarantine protocols in the CTC/4th Floor CHSB due to positive COVID-19 test results from individuals assigned to the unit.“

There was no way for prisoners to verify if any of the newly reported cases had been updated on the California Department of Corrections and Rehabilitation (CDCR) COVID-19 tracking website.

Men have been regularly taken away to quarantine, which some say has caused the prison’s Adjustment Center (AC) to reach maximum capacity. Other than the prison hospital, the AC is the only facility with solid steel doors.

“They took two away from cell 2-W-87 last night,” said Ossie Giles, 61, who lives several cells away. He said men have been coughing in cells all around him, and some were complaining about body aches and not being able to taste food.

Prisoners have been quarantined after contact tracing was done by medical. Others were rehoused after being tested for COVID-19. Testing appears to be happening more frequently and in larger numbers as the state continues to increase the prison population by transferring inmates into San Quentin.

Anthony Caravalho, 59, said “trucks transporting portable showers, and restrooms inside the prison to the Garden Chapel area” were visible in the yard. He lives in South Block where there are about 257 cells in the Badger section, most of which are vacant.

“I was told there are 25 bunks in the Protestant chapel,” said Juan Haines, who has been incarcerated at San Quentin for nearly 15 years. He testified as an expert witness last year at the Marin County Superior Court hearing for the consolidated habeas corpus petitions, which involved prisoners’ seeking relief from COVID-19 pandemic in 2020.

Prisoners have questioned the need for quarantines while the CDCR continues to send more prisoners to San Quentin from around the state. Some have said it “makes no sense” to fill the prison back up.

Irrespective of the men’s concern for their health and safety, the CDCR and San Quentin has been persistent in its practice of doubling up men in 5′ X 10‘ cells since the 416-day COVID-19 “modified program” officially ended in May 2021. The result has been long lines for meals, medication, medical appointments, showers, telephone calls, access to programs, and less social distancing.

Even though the prison was locked down, temporarily, because of the COVID-19 Delta variant, the CDCR was still transferring prisoners into San Quentin. From where? No one could say. Out of caution, many prisoners wanted to know if the new arrivals had been tested and vaccinated.

“It’s none of their business who’s vaccinated,” Sergeant Baker said in West Block when some prisoners refused to accept cellmates during the short, modified program and quarantine to control the Delta variant. “They’re not supposed to like it.”

Baker spoke during the institution count of all inmates inside the West Block housing unit. She was walking with a male correctional officer, and her statement was made in the open, within earshot of several cells on the first floor. She had no reasonable expectation of privacy.

“Modified Program” is how San Quentin’s DPSR, dated December 27 (2021), describes the status in one of its dorms at the prison. It reads, in part: “…all inmates housed in H-Unit: Dorm #4 are placed on medical quarantine status to manage exposure to Respiratory Syncytial Virus.” Inmates who read the DPSR were skeptical.

The newsletter also referenced two court rulings on the CDCR’S handling of the COVID-19 pandemic in 2020. In both cases, the courts found that “deliberate indifference” toward inmates’ health and safety had been present.

The First District Court of Appeal in the case In Re Ivan Von Staich, and the Marin County Superior Court consolidated habeas petition hearings cited “deliberate indifference:” Neither court provided relief to inmates from overcrowding. Although San Quentin never declared an official state of emergency on its DPSRS during the 2020 COVID-19 outbreak, the Marin court stated the emergency is over and many prisoners are now vaccinated.

Twenty-eight prisoners died at San Quentin in the summer of 2020 when the COVID-19 pandemic swept through the prison.

Given how the CDCR continues to operate, and no relief coming from the courts, some prisoners have said they are bracing themselves for another round of COVID-19 infections, lockdowns and more deliberate indifference.

Kevin Sawyer is the former associate editor for San Quentin News.  He is a native of San Francisco.