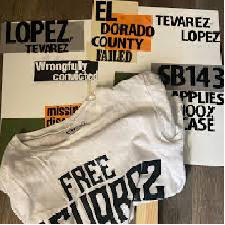 Sacramento, CA – On November 30, 2021, Tevarez Richard Lopez was found guilty of murdering Dennis “Spike” Wright, Jr., by an all-white jury of six men and six women, and now faces life in prison without the possibility of parole.

Lopez is the second person to be found guilty by a jury for the murder of Dennis “Spike” Wright, Jr., after the victim brought 100 pounds of marijuana to sell to prospective buyers at a motel.

Harvest Davidson, Dion Vaccaaro, Andrew Adams, Tristan Batten and Lopez all are being charged with Wright’s murder, and are known as the Tahoe 5. All have been in jail or prison since their arrests.

During closing arguments, Mandrell said Lopez was “responsible for everything. If not for him, the others wouldn’t be in Tahoe and Dennis would be alive.”

Lopez’s attorney, James Warden, said Lopez was “not responsible for something he did not do. The robbery doesn’t have anything to do with Lopez.

“What happened in Tahoe was Dion (Vaccaro),” said Warden. He questioned Mandrell’s use of the word “mastermind” when describing his client. He also argued there were many holes in Mandrell’s timeline.

In February 2020, Vaccaro was found guilty of murdering Spike and of robbery. Vaccaro filed a motion for a new trial, citing ineffective counsel during the trial.

Judge Kingsbury denied that request. Sentencing is scheduled for February 2022 and Vaccaro faces life in prison without the possibility of parole.

Adams plead no contest to murder and robbery and was sentenced to 25 years to life. He has been in North Kern State Prison since August 2021. According to the state’s prison website, he is eligible for parole in September 2028.

This reporter recently spoke to Lopez and how, despite being over 100 miles away, was convicted for the murder of his friend Dennis “Spike” Wright.

Q:  When is your sentencing date?

A: I delayed that date so I can file a motion for a new trial then I have to jump through all these hoops to attempt to fire my public defender.

Q: You shouldn’t have to try to get a new lawyer?

A: I know, that’s my right. I brought it to the court’s attention and filed that motion long before trial and I was denied even though the judge wasn’t able to provide an answer why.

Q: Are you going to ask for a change of venue to receive a trial by a jury of your peers and not all white people?

A: I couldn’t believe it when they brought all the jurors in. I try to keep my faith and I’m an optimistic dude but not even judging a book by its cover but this is not going to be a jury of my peers. There wasn’t one Black person and there were a few Latinos but they were kicked to the curb immediately.

Q: So the court, the jury, everybody knew that you weren’t there?

A: They knew that I was over a hundred miles away. This is the cold part about the situation, at the time the felony murder law stated you could convict someone of murder just by association. With the changes that came with SB 1437, even with his (Mandrell’s) allegations as they stood, it fully applied to my case. I have court documents where the judge is saying ‘You need to resolve this case without a trial. In regards to the new law, it applies to this case. We can all see the tea leaves and what is going to happen down the line. So I suggest you resolve this with his lawyer so we don’t waste any more of the court’s time.’”

Q: The judge told the DA this isn’t going to hold up?

A: Yeah that’s what she said on the record. SB 1437 applies to my situation.

Q: How do you feel about being convicted of the murder of someone you considered a friend and not being there when it happened?

A: There are a lot of emotions. I’m mostly shocked. They have everything that shows this was my business partner, this was my friend. He was someone I would sit down and have brews with, eat a steak with, we did deals with each other.

Q: Who was the girl that pulled the gun out of her boot? She was white, Kyndra Ghiorso?

A: She looks like she is mixed with something but she is extremely racist. She stated on the record, but the judge didn’t allow it, that all N-words look alike and that if she was in a room with an N-word by herself she would kill them. She stated that it was her fault that her boyfriend got shot because she initiated gunplay and fired the first three shots. She got 100 hours of community service.