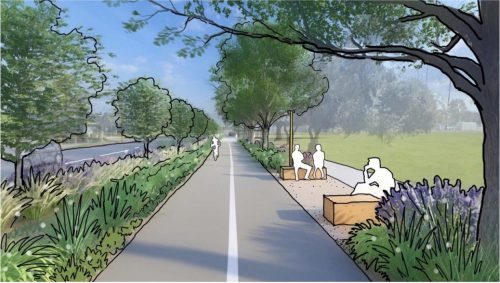 DAVIS, CA – Once known as the Avenue of Trees, Russell Boulevard is on the verge of a transformation. Through the project, “Reimagining Russell,” the city of Davis aims to create a comprehensive vision for Russell Boulevard as a dynamic, safe green space.

Reimagining Russell was launched in the Spring 2021, based on the city’s interest in addressing safety and creating a visual identity for this three-mile stretch from B Street to Cactus Corner on County Road 98.

Zerger shared the vision for Russell Boulevard to become “a corridor that safely and intuitively moves people” and “an inviting, human-centered boulevard that is authentic to the Davis and UC Davis experience.”

Through the project, this stretch will ultimately act as a “welcoming gateway to Davis, reflecting local culture and community,” Zerger said.

Zerger went on to share cross-sections of concept designs for Russell Blvd. Many of the concepts included separating pedestrian and bike paths, as well as adding spaces for local fauna, such as this section from Arlington to Lake Boulevard. 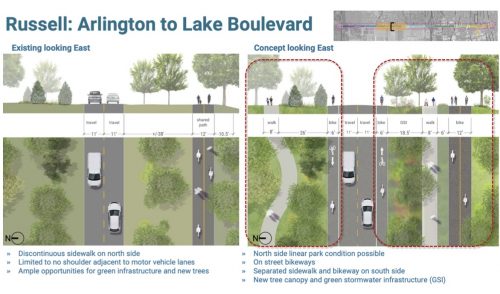 Abby Stone continued with information about placemaking, urban design, and green infrastructure while reminding everyone that the goal of the meeting was simply to establish a vision for the corridor and the full design would be made in a later phase.

Along with establishing a callback to Russell Boulevard’s old nickname as the Avenue of Trees, the design for this street would be inspired by the city’s “agriculture history and riparian habitats” as well as the “UC Davis Arboretum,” Stone explained.

Stone then moved onto a “site walk,” showing concept illustrations of key sections along Russell Blvd., such as this seating alcove that separates the bike path from the pedestrian sidewalk.

Design plans also include public art. “Artists could be brought in to design, for example, sculptures,” Stone added, “to make this a really distinctive, notable gateway as folks come into town.

“This could be a really exciting phase in a future part of this project where local artists representing different communities could be brought in to share their voices via public art.”

The transformation of Russell Blvd. will be based on the natural landscape of the area, including incorporating a grand tree canopy to provide shade. Streetscape furnishings such as seating, lighting, bike racks, and signage will also work together to support that vision.

The presentation ended with two potential mood boards for the project that “strive to create a palette that feels appropriate for Russell Boulevard.”

While showing the mood boards, Stone clarified that “the final palette that is proposed in this vision plan doesn’t necessarily have to be one of these two but we think this is a helpful way to start to steer this conversation.”