Davis, CA – In pollical campaigns, we expect political theater.  While actually wholly inaccurate political statements are generally frowned upon, we expect a good deal of pollical theater and exaggerated claims in political discourse.

But ballot arguments are a bit different because they appear in the election material and are supposed to be at least accurate.

Along those lines the ballot arguments against DiSC – Measure H – are at times wholly inaccurate and other times wild exaggerations.

For example, the opponents of DiSC argue that “it is still non-compliant with the City of Davis General Plan.”

In the ordinance it notes, it has been “consistent with the General Plan, as amended…”

By law, it cannot be non-compliant with the City of Davis General Plan.

Second, they argue, “The Developer has made almost no binding commitments…”

That’s at the very least a gross exaggeration if not outright falsehood.  There are over 50 binding commitments – all listed in the project baseline features.

In order to achieve this goal, “each individual development must, prior to the issuance of building permits, demonstrate consistency with the City’s Climate Action and Adaptation Plan by demonstrating a fair-share reduction of GHG emissions.”

Examples of this include: “VMT reduction through TDM programs, electrifying project components, inclusion of on-site renewable energy, institution of composting and recycling programs, implementation of an Urban Forestry Management Plan, use of energy efficient fixtures, and finally, purchasing off-site mitigation credits if necessary.”

“The Project shall meet or exceed Title 24, Cal Green Tier 1 and will utilize the City of Davis’ Residential Energy Reach Code standards. The Reach Code promotes energy efficiency within the City of Davis through the use of energy-efficient building standards and is intended to ensure LEED Gold Equivalent or better”

Along the same lines, the opponents argue, “According to the City’s own Environmental Impact Report, DiSC will add 12,000 additional car trips per day…” 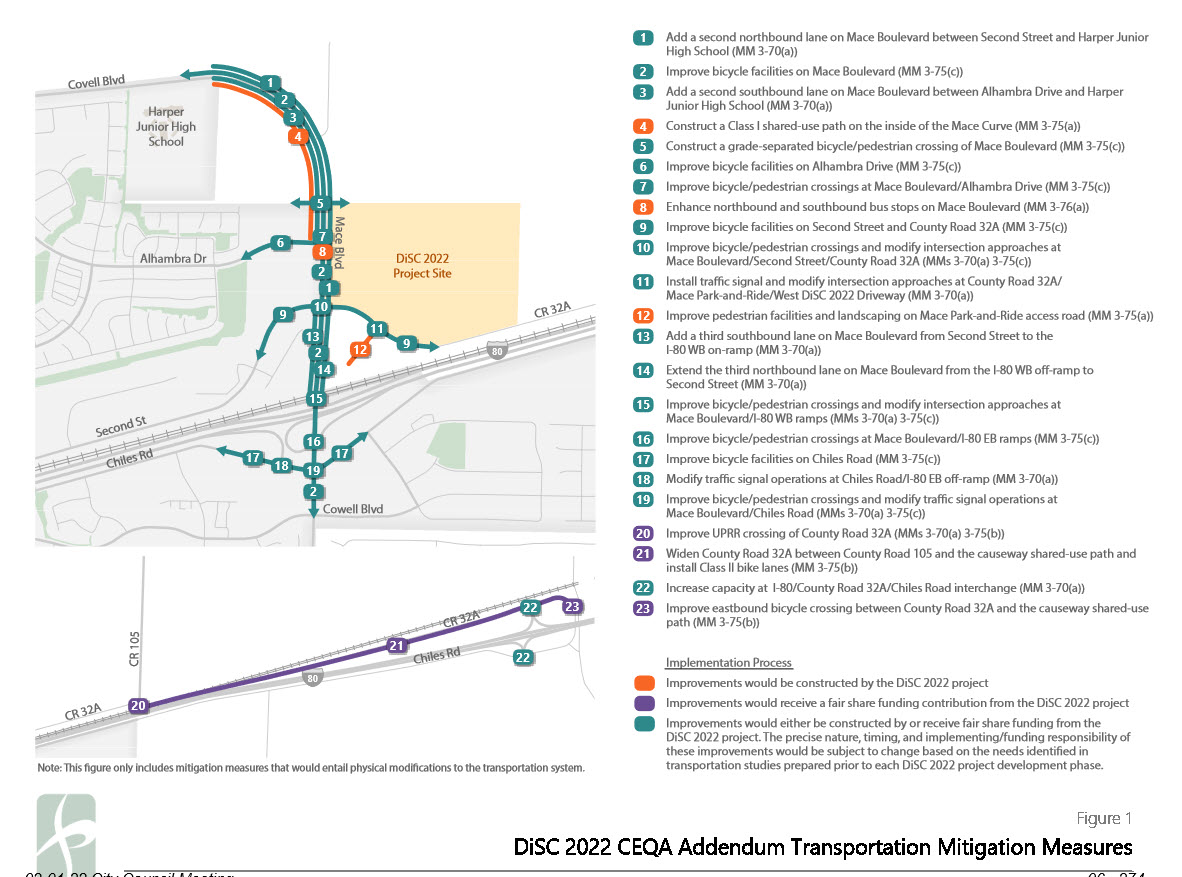 Among the baseline features:

One person noted, that mitigations measures while “worth mentioning” should be taken with “a grain of salt.”

While that’s definitely a reasonable position, it misses two problems – one that the ballot argument used the gross figure as though it were the net traffic impact and two, the project baseline features contains specific benchmarks to guard against such a reading.

Councilmember Dan Carson during the approval argued, “It was said before, and I want to try to make this concrete, this project doesn’t in the long term worsen traffic, it solves the traffic problems. It makes things better. And that’s not my conclusion. That is the conclusion of the transportation experts at Fehr & Peers.”

He said, “There was document released in December referred to as Volume Two Traffic Study that has an amazing amount of detailed information here to sustain this.”

The mitigation calls for additional lanes and signalization.

“They conclude that the total number of intersections operating with an average level of service of F during one or more peak hours, would decrease from nine to zero,” Carson explained.

12,000 additional car trips is full buildout with zero mitigation.  But with all of the required mitigation it will be significantly less.  None of the mitigation is mentioned by the opposition and what that would do.

Hyperbolically the ballot arguments adds, “On the worst days it already takes 45 minutes just to drive a mile on Mace Boulevard.”

That’s certainly not a regular occurrence if it ever occurred.

That reminds me of the claim by Alan Pryor in 2020, that during peak hours there would be a nearly five-hour delay for traffic.

“If you do the math,” he said.  “You will find out it will take almost five hours to get all of that traffic onto the freeway every evening.  Obviously this is a huge huge problem.  It will likely result in total gridlock on the entire southeast side of Davis.”

The ballot argument also warns, “The City’s analysis predicts that competition from retail and commercial at DiSC will cause sizable vacancies in Davis on top of the effects from the pandemic. We need to protect our local businesses!”

But as previously reported, there are protections to the downtown built into the proposal.

According to the staff report, “Prior to occupancy of retail space, Developer will demonstrate that the proposed ancillary retail will not exceed the anticipated demand increase generated by new project employees and residents.”

It continues, “If the analysis demonstrates that the proposed amount of ancillary retail space is outpacing employee- and resident-generated demand, then the ancillary retail uses shall be scaled back to be commensurate with the projected demand or omitted.”

During his presentation to council in February, attorney Matt Keasling addressed the issue of the impact to downtown.

EPS Consulting estimates that employees on the site will “spend on average $8.3 million offsite within Davis a year – that’s $8.3 million spent at other Davis businesses by the folks living and working here.” Keasling continued, saying “that does not include the almost $42 million in business-to-business transactions where the businesses at the DiSC site are doing business with other businesses within the city of Davis.”

He continued, “Additionally, what it shows is at full buildout, the annual employee compensation is around $200 million from the people that work at this site, which is a major boost to the regional economy.”

Finally he noted that “as sort of a safeguard against any concern that perhaps our retail will draw people away from the core, we do have a requirement that prior to developing any retail on site, we have to conduct a demand study to show that there is sufficient demand generated on our project site that warrants creation of that retail, or we are precluded from creating the retail until the demand exists from within the DiSC 2022 development.”

Councilmember Josh Chapman, who is a downtown business owner, said he was “extremely happy with and appreciates the retail demand market study.” He said, “That was a huge piece, as a small business owner downtown, that some of my business colleagues were wondering how it would affect the downtown. But I think that this a tool and mechanism to really help address some of those concerns.”

In sum then, the project cannot be non-complaint with the City General Plan.  The 12,000 additiona car trips assumes no mitigation at all.  The 54 million pounds of GHG annually and “completely derailing” the city’s ability to meet carbon neutrality goals by 2040 ignores that carbon neutrality by 2040 is written into the project baseline features and finally, the warnings about downtown blight, ignore the fact that the project attempts to address that also through measures and baselines to protect the downtown.

Share:
Tags:Ballot ArgumentsDan CarsonDISC-2022Project Baseline Features
Previous : New Report Finds the Police Are a Huge Part of the Problem in San Francisco
Next : SF Police Will No Longer Use Survivors’ DNA in Unconnected Crimes