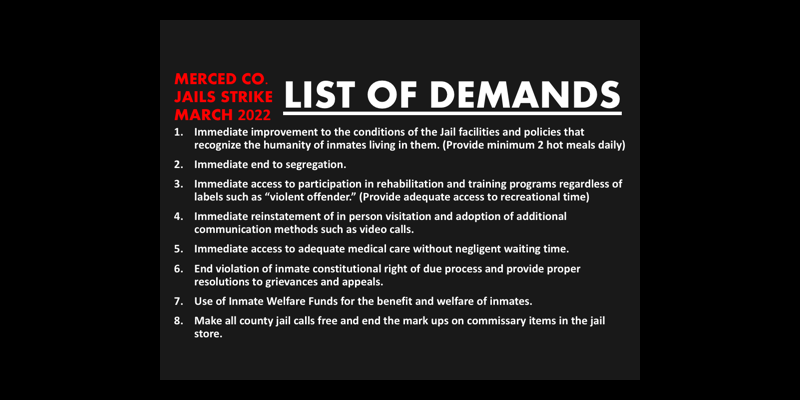 Merced Inmate Rights Association (MIRA) and Merced Under Construction (MUC) are holding an action in solidarity with the men currently on hunger strike in the Merced County Jail tomorrow, according to a press release.

MIRA and MUC say the purpose of this action is to ensure that the voices of those within the Merced County Jail are amplified.

“This is one of many hunger strikes that have taken place inside of the Merced County Jail facility due to harsh conditions and treatment,” the press release said.

The largest hunger strike took place on September 9, 2016, with over 185 detainee participants and outside hunger strikers.

“The Merced County Correctional staff should jump at the opportunity to eliminate archaic detention methods and policies that continue inhumane treatment in our jails. A step in the right direction would be meeting the demands of the pre-trial detainees on hunger strike,” Merced Under Construction community advocate, Victoria Espinoza said.

The list of demands includes improving the cleanliness and sanitary standards in the inmates’ housing facilities.

Improve medical, and provide more education, job training, rehabilitation and religious programs necessary to reduce recidivism. Expand visitation—as detainees went without visits for over two years and the jail has reopened with conditions that inmates and visitors must be vaccinated and now children under age five are banned from visitation.

In an anonymous letter to family members, inmates at Merced County Jail say they are subjected to harsh conditions and are often mistreated.

Inmates state in the letter that they are subjected to unhealthy and unsanitary living quarters, substandard medical and dental treatment; are denied visitation; and mail is regularly “lost,” both incoming or outgoing.

“Many of you are blind and unaware of the harsh living conditions and scrutinization that is forced upon inmates within this county jail,” the letter reads. “Change needs to be made and we will exhaust our efforts to attempt to have such. We have initiated a peaceful protest, specifically a hunger strike, we will not be accepting any type of food, attending any movements, or accepting any type of medical attention until our voices are heard and our demands met.”

In a statement to the Merced Sun-Star, Merced Sheriff’s Office spokesperson Daryl Allen said other grievances are things you would find or request in a state prison, but a county jail typically does not offer those services or items.

“However, as the state continues to make changes to how county jail facilities operate, as they now hold incarcerated persons for longer periods of time, the County’s jail budgets for facility improvements and services have not changed,” the statement from the Sheriff’s Office read. “The Sheriff’s Administration has been working diligently with State and County officials to remedy the budget issues, and are currently working on building and renovating new jail facilities.”

The Merced Sheriff’s Office told the Merced Sun-Star that many of the issues raised in the inmates’ letter to administration have already been resolved.

Inmates and activists say this is not true.

“We challenge the Sheriff’s office to detail exactly what has been addressed. Those of our community that are locked up in the jail and that continue to endure living in these inhumane conditions vow to continue their strike until they see real change,” MIRA said in the press release.