Like clockwork, every Thursday and Friday afternoon, Mace Boulevard mysteriously shifts from a quiet street with two vehicles a minute, to a jammed mess.

This Tahoe-bound traffic lines up on Mace for over a mile both north and south, waiting to get back on the eastbound freeway.

On South Mace, residents can’t even use the street to exit their neighborhood. Davis proposes addressing this congestion by widening South Mace. That will cost $4.5 million, plus another half-million dollars in consultant fees, involve a year of construction hassle, be permanent, and ignores that South Mace was jammed when it previously had four lanes.

First, let’s understand that the cause is beyond Davis to fix. Many cities suffer from the “Waze Craze,” which makes driving a game, where the quickest trip time wins.

If a driver’s route saves a minute or two, then Waze and the other navigation apps direct hordes to follow. What works for one driver doesn’t work for hundreds. As the shortcut becomes overwhelmed, someone else finds a quicker route, the apps redirect, and the new route gets overwhelmed. Only to repeat again and again.

For Davis to win this game we have to keep that first driver from leaving the freeway and finding a quicker route via Mace.

Drivers leave eastbound I-80 because it routinely jams up after the 113 interchange. Two miles before the interchange, a lane is gained, and then after the interchange, two more lanes are gained. While you’d be tempted to think more is better, before the Richards exit, all three added lanes are dropped abruptly. All that merging creates turbulence and delay. To avoid that delay, the apps direct traffic to exit and go through Davis. But because the Causeway is the only way across the Yolo Bypass, all that traffic has to return at either the Mace on-ramps (northbound and southbound) or the Chiles on-ramp (Yolo Fruit Stand). Note that every route back to the freeway involves Mace.

Hence, the City needs to ask Caltrans to streamline the freeway by removing these extra lanes. 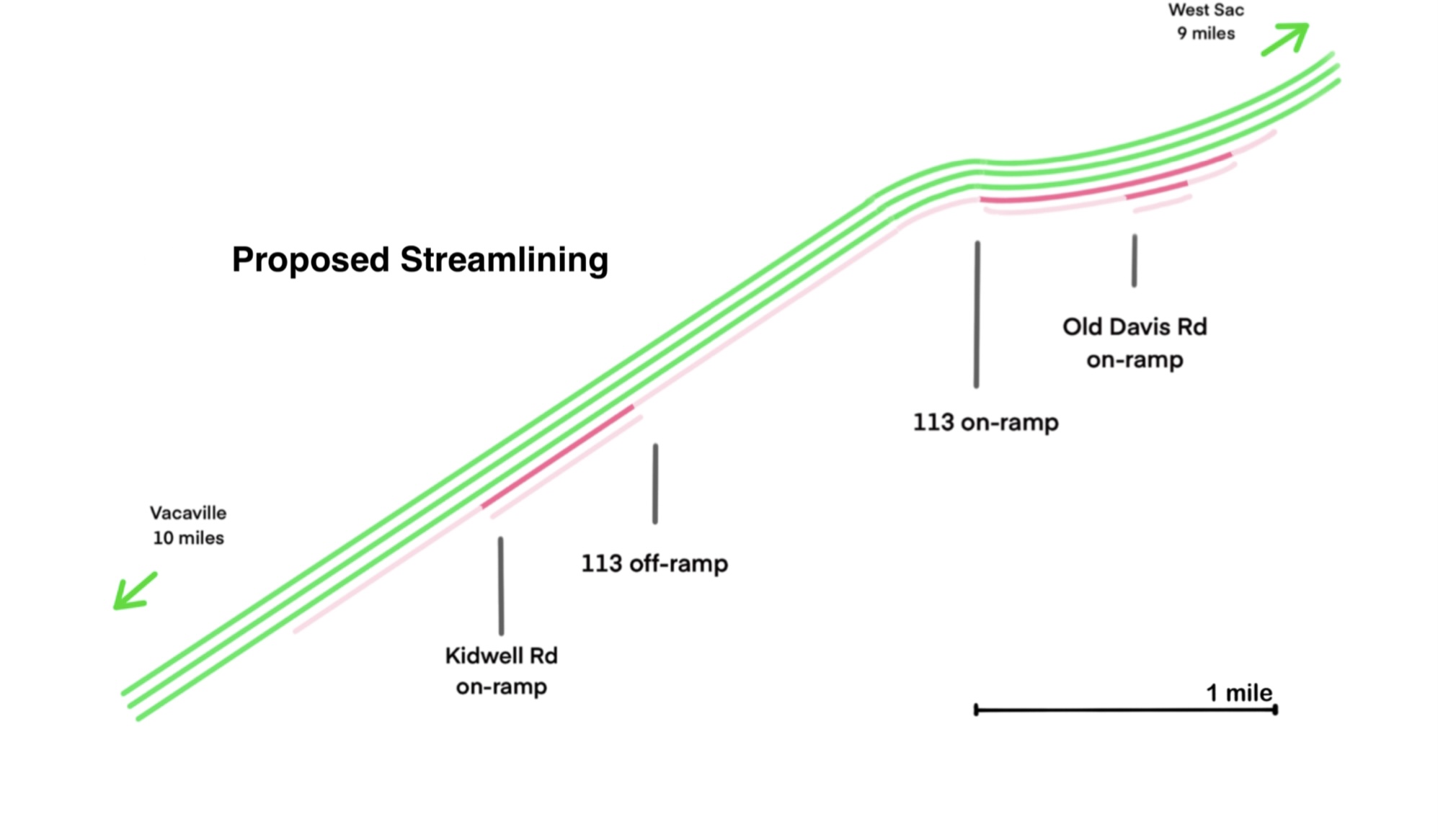 They can experiment with cones. Cheap and fast.

The apps report the quickest travel time, and the driver who jumps the queue using the unmetered carpool Mace on-ramp is that quickest driver. 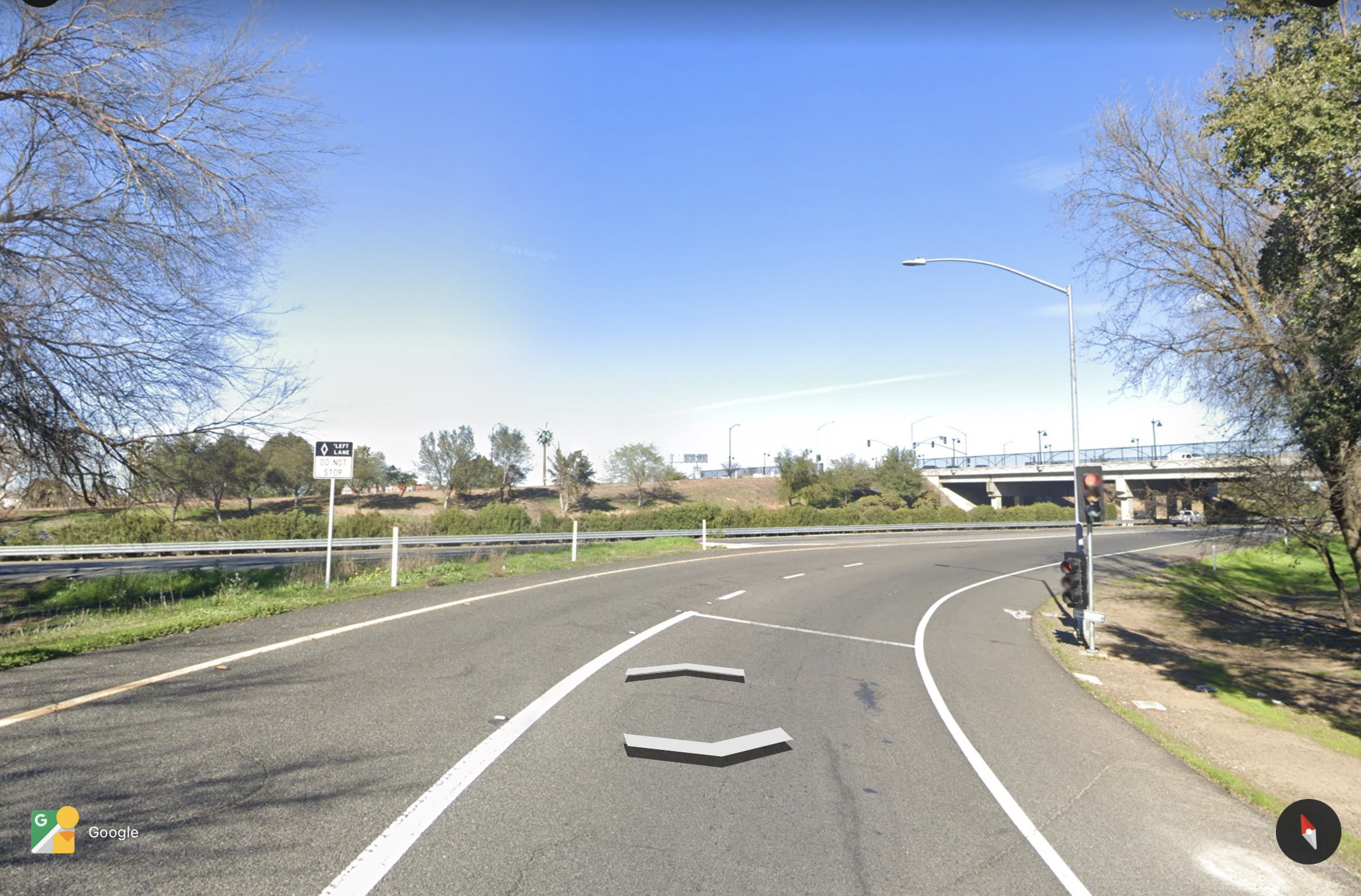 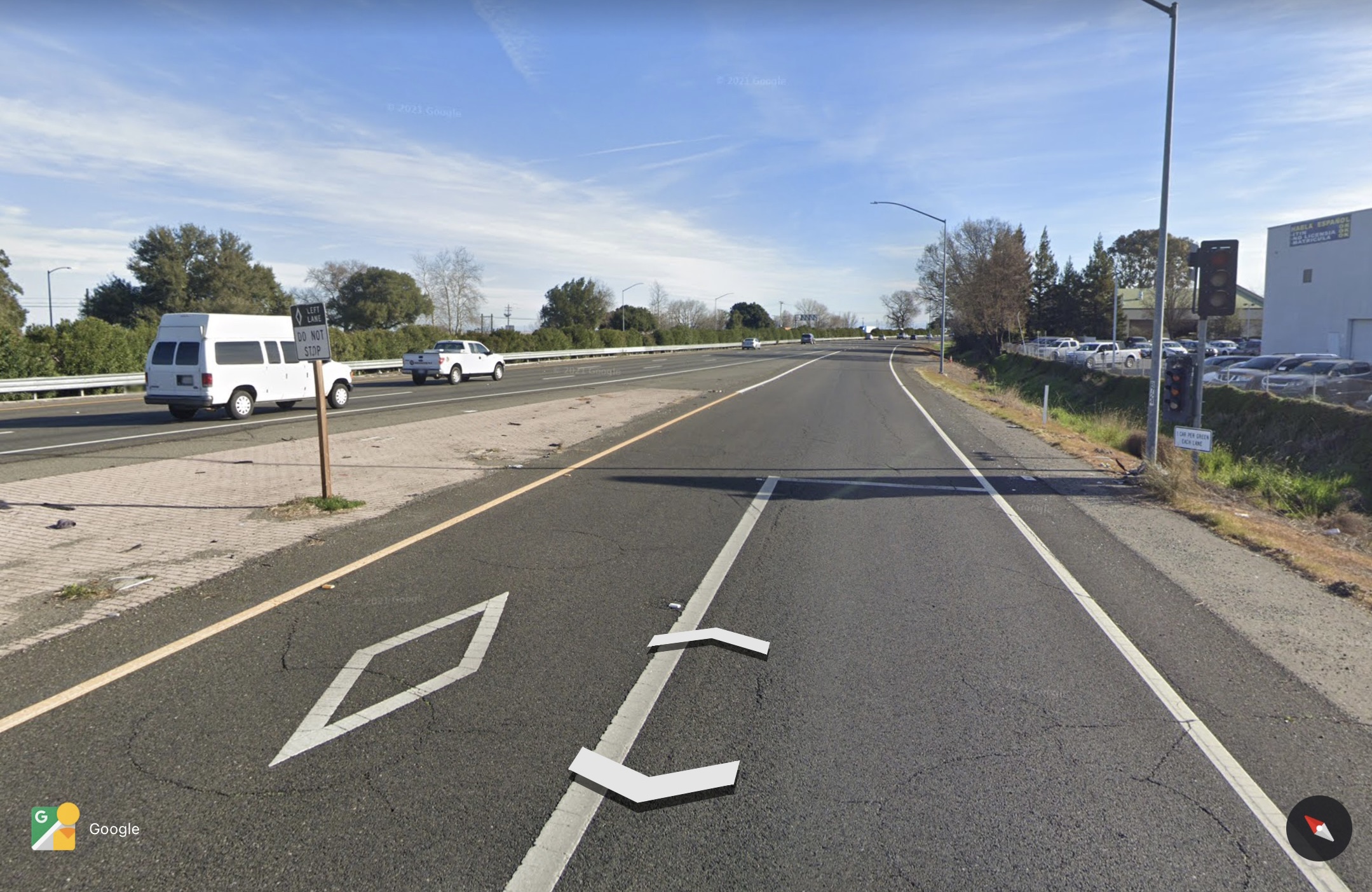 We need to keep them from winning. Hence, remove the carpool on-ramp lanes, as they create a shortcut for the first driver to achieve the best time that inspires the apps to direct hundreds of drivers to follow. Plus, Mace’s two on-ramps overwhelm the three-lane freeway.

Reducing that merging turbulence will speed up I-80, further decreasing the incentive for the apps to direct drivers to exit and drive through Davis.

There’s recent, local evidence that metered on-ramps reduce freeway delays. In 2018, Caltrans tested a meter on the Chiles on-ramp and found measurable speed improvement on I-80 after the Mace on-ramps. They made that ramp meter permanent. However, Caltrans has yet to meter the two Mace carpool on-ramps. Caltrans reports that 40% of the traffic at these on-ramps use the carpool lanes, much higher than legitimately expected, and hence we can expect a strong benefit from closing them.

If Caltrans insists on two lanes for each on-ramp, then both lanes need to be metered. That will take time and Caltrans asked Davis to pay for the $1 million cost. But that’s cheap compared to the cost of widening Mace. And to avoid creating an incentive for queue jumping, neither lane can be used for carpooling. So why have two lanes; just change the sign to allow two vehicles with each green. The logical first test is to close the carpool on-ramp lanes to determine if we can quickly and inexpensively improve the lives of Davis residents.

Before spending millions widening Mace to accommodate the freeway traffic, we need to try eliminating the incentive to exit the freeway and drive through Davis. Eliminating the three extra freeway lanes and closing the unmetered carpool on-ramps are quick and easy ways to keep drivers on the freeway. Do these changes synergistically tip the balance in the “game”? Let’s find out.