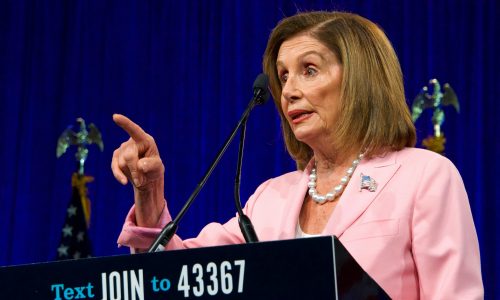 San Francisco– After receiving extensive backlash from both Democrats and Republicans for
her silence on the issue, Nancy Pelosi endorses a stock trading ban pushed by Democrats in
the House of Representatives. A stock trading ban would prohibit Congress members from
trading stocks to prevent possible conflicts of interest from occurring.

In December 2021, Pelosi rejected a potential stock trading ban, stating that members of
Congress “should be able to participate in our government’s free-market economy.” After
Pelosi’s public statement, she faced public outcry from both parties in Congress, as well as from
citizens. They alleged that her and her husband’s stock holdings, worth millions, caused her
initial opposition to the ban.

Members of Congress have been engaging in questionable stock decisions as outlined by a
New York Times article in Jan. For example, Kentucky Democrat Representative John
Yarmuth bought cannabis stock while supporting legislation in favor of the industry. Another
example involves Kentucky Republican Senator Rand Paul’s wife, who bought stock in Gilead
Sciences – a company that made a COVID antiviral drug – in the early days of the COVID-19
pandemic.

Although the politicians engaging in these practices have claimed they did nothing wrong, there
is still a large percentage of U.S. voters who lack trust in their government because of the optics
that these examples give to the public. A survey conducted by a conservative advocacy group,
Convention of States Action, found that only 5% of voters approved of stock trading within
Congress.

At a time of great division in the country, members of both parties can agree to banning stock
trading within Congress. With 70% of voters supporting this ban, advocates say that it would
restore public trust in Congress, which currently has an 18% approval rating from voters,
according to a recent Gallup poll.

Robert Reich, former Secretary of Labor and current Public Policy Professor at UC Berkeley,
argues that “banning members of Congress from trading stocks should be a no-brainer,
including as a means to reinforcing the public’s trust in government.” Reich adds that “members
of Congress are elected by the people to make decisions based on what is best for them and
not based on what is best for their stock portfolio.”

As Pelosi’s endorsement for the concept of a stock trading ban within Congress is a huge step
in the right direction for the Democrats actively pushing legislation to be written, there is
currently no specific piece of legislation yet. However, those in favor of the ban hope to see
legislation finalized and put up to a vote before the November midterm elections this year.
Pelosi’s support for the ban will significantly help Democrats increase their support from more
members of Congress.

Ineka Damen is a writer for the Vanguard’s Social Justice Desk. She is from Santa Barbara, CA,
and is currently studying Political Science with an emphasis in American Politics as well as a
minor in Public Policy at UC Berkeley.