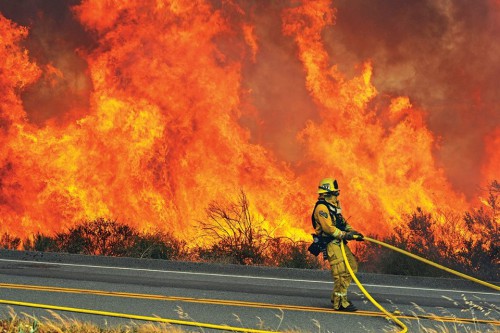 DAVIS, CA – Every year, wildfires threaten the safety of inmates in California prisons as they endure plumes of smoke, lack of electricity, and fear of being unable to evacuate to safety. Despite the fact that many of California’s prisons are vulnerable to wildfires, safety guidelines for prison evacuations have yet to be established. Governor Gavin Newsom’s Department of Corrections and Rehabilitation is coming under fire for being unprepared to handle the climate crisis in California’s various prisons, jails, and detention centers.

California inmates are one of the populations most affected by wildfires due to the location of high capacity facilities. According to The Intercept, “There are 54 jails, prisons, and detention centers nationwide that hold more than 1,000 people that are above the 95th percentile for wildfire risk” due to their location. Out of those 54 prisons, 16 of them are in California and make up half of California’s 34 adult prisons.

In 2020, when the LNU Lightning Complex fires threatened the Californian city of Vacaville, the prison authority abandoned the incarcerated prisoners of two facilities in the evacuation zone. While 15,000 people were given the order to evacuate, the prisoners were left inside the prison.

Despite the cry of protesters outside the home of Department of Corrections and Rehabilitation Secretary Ralph Diaz, neither prison was evacuated and no official reason was ever given as to why the prisoners were left to endure the fire.

In Aug. 2021, a year after the LNU Lightning Complex fire, inmates near the remote Californian town of Susanville had to deal with the devastating damage of the Dixie Fire, which burned 963,309 acres, destroyed 1,329 structures and left 95 structures damaged. Power lines were taken out by the fire, forcing many inmates to live without electricity for up to a month. Those in California Correctional Center’s C-Yard were hit the hardest, as the backup generator failed and deprived the inmates of light for nearly a month.

In the C-Yard, hundreds feared for their safety as smoke filled their cells and none of them knew how they would escape the Dixie Fire if it reached them. Joseph Vejar, a prisoner at that center who served as a chair of the inmate advisory council, said, “We never had evacuation drills. I never heard of them having a plan for evacuation.”

In an email, Terry Thornton, the deputy press secretary for the California Department of Corrections and Rehabilitation, said the agency regularly reviews and updates emergency protocols, including evacuation plans, for each prison. She claims that many of the California state prisons are “well prepared for any wildfire risks, regardless of the area they are located” due to the “construction features of many of prisons and camps, landscape fuel management modifications, dedicated fire brigades, and planning.” Thornton declined to elaborate further on any specific detail due to “safety and security reasons.”

Prison evacuations that do happen can go awry. In 2020, when Oregon was threatened by wildfires, inmates there reported not having sufficient food, water, access to bathrooms, or COVID-19 protections. Many did not have access to their medication, and others were placed with and left to deal with violence from former gang members.

A report by the nonpartisan Legislative Analyst’s Office, a state body that provides lawmakers with policy advice, said that it would take nearly $20 billion to resolve the entire list of infrastructure problems that prison officials have identified. A solution the Legislative Analyst’s Office had to mitigate prisoner harm from climate disasters was to close some prisons down. Organizers with Californians United for a Responsible Budget, a Black-led statewide coalition focused on reducing the amount of people in jail, want more prisons closed down.

With the climate crisis revealing many holes within the prison infrastructures, the Organizers with Californians United for a Responsible Budget want California to close 10 prisons and release 50,000 people. Two prison closures are potentially going to happen. In April 2021, the Newsom administration announced that it would close the California Correctional Center in Susanville by June 2022, but the town sued and won an injunction, freezing the process as it depends on the facility for its economy. The other, the Deuel Vocational Institution, was deactivated on Sept. 30, 2021.