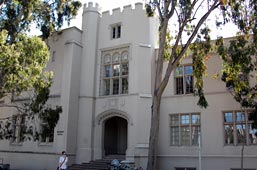 BERKELEY, CA — In May 2021, faculty and graduate students of the UC Berkeley Department of Philosophy submitted a proposal to unname Moses Hall, citing concerns for building namesake Bernard Moses’ racist and white supremacist views. After the community feedback period ends in Mar. 2022, the Building Name Review Committee will make a recommendation to UC Berkeley’s chancellor on whether or not to remove the building’s name.

According to the proposal, many of Moses’ major works propose anti-Black, anti-Indigenous, and Anglocentric viewpoints. Detailing his racist and colonialist views, the proposal authors note Moses’ beliefs “that races were distinguished by inheritable physical and mental characteristics, i.e., that race is a matter of ‘blood,’” and that “non-white races are inferior to the white race.”

Proponents of unnaming Moses Hall argue that the name glorifies Moses and his views and that keeping the building name could be seen as excluding campus communities of color. According to the proposal, “The hurt that name has already caused to some in our community is what gave rise to this proposal.”

One public comment in favor of removing the name states: “I find it very oppressive to have to go to school on a campus that has buildings named after known racist and discriminatory individuals,” and that “their ideals have no place on Berkeley’s campus of intelligence, high intellect, and diversity.”

A public comment in opposition to the removal claims that “we must learn to divorce ourselves from a good-bad or dichotomy study of history, and realize that no individual at any period of time will ever hold up to the even greater scrutiny of the future.”

Unnaming a building is not a rare phenomenon on the UC Berkeley campus. Since 2018, the chancellor and UC president have approved a number of proposals to remove building names and encourage campus inclusivity. Barrows Hall, Boalt Hall, Kroeber Hall, and LeConte Hall have all been unnamed on the basis of their namesakes’ racist ideals. UC Berkeley has not renamed these buildings after other figures.

The public comment period will remain open until Mar. 3 at 2 p.m PST. Following the submission and feedback process, the Berkeley Name Review Committee will prepare a recommendation for the UC Berkeley chancellor. If the committee does not reach a consensus, they will write separate proposals.

Kimberly Bajarias is a second-year student at the University of California, Berkeley, majoring in Political Economy and Linguistics.

Share:
Tags:berkeleyBernard MosesfacultyHistoryMosesMoses HallPolitical ScienceRenamingUCuc BerkeleyUniversity of CaliforniaVanguardVanguard at BerkeleyWhite Supremacy
Previous : Commentary: Cal Supreme Upholds Enrollment Freeze at Berkeley – But Be Careful What You Wish For
Next : New Legislation to Increase Voter Registration in Underperforming Counties and Civic Engagement in California Schools