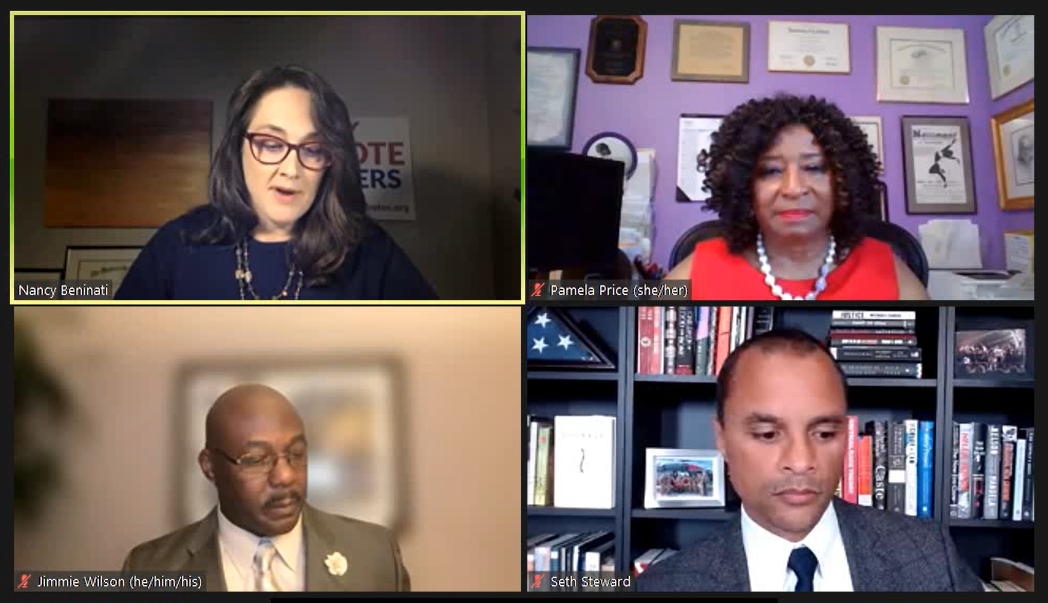 Oakland, CA – Three of the four candidates for Alameda County DA appeared on Monday evening for a candidates’ forum sponsored by the League of Women Voters. Terry Wiley was not present, but appearing were Pamela Price, Seth Steward, and Jimmie Wilson.

Wiley did submit a two-minute opening statement that was read by the moderator.

Question: How will you connect with the community, ensuring that you’re hearing about all concerns from a variety and spectrum of different voices?

Pamela Price: “I will do it with great joy as a person. who’s been a community activist and has served this community for 30 years. And part of the reason why I’m running is that I feel like I’ve been embraced by the people of Alameda County who have allowed me to become the lawyer that I was able to become.”

She added, “Our hope is that once we win this thing in June, that we will take the next six months to create interdisciplinary commissions, where we will invite people who have been system impacted. We will bring experts to the table. We will bring psychologists. We will bring a wide variety of community organizations from across the county…”

Seth Steward: “I believe in a number of different

advisory boards.”  He said two in particular—one being a victim’s advisory board.  “So that would include victims of a plethora of different community groups and organizations, including victims of hate crimes.  The entire breadth of Alameda County will be included in that group. In addition, we also want to have a youth advisory board, including youth who are formerly incarcerated.  These are the conversations that we need regularly to be able to have conversations with regard to what’s happening in the community and how we can better serve them.”

Question: What specific topic would you concentrate on if elected?

“We also will have a reliable way of prosecuting low level offenses. We can’t have people going into our stores, looting, stealing, in the open without any accountability.”

Pamela Price: “My focus for the last 30 years of the civil rights attorney has been to provide access to justice for this community. And I have the same theme and thoughts about transforming the criminal justice system. It’s about making sure that it is accessible, fair to the community and that there is accountability for those who have harmed other people.”

She said, “We have to make sure that the system is accessible to victims, and to families of victims, as well as families of people who are charged with crime.  We spend far too little time actually engaging in the community in what we’re doing and trying to find justice. We have to have a fair and restorative justice system that will serve the residents of Alameda County.”

Question: There has been a suggestion that Alameda County juries do not reflect the racial diversity of its residents. What would you do as district attorney to ensure a fair jury system in Alameda county?

Jimmie Wlson: “I’ve served five times as a juror prior to becoming a DA. The last jury I sat on was a murder case and I was the first person in the chair and I looked around the room and the, all the other Black people in the room were the two defendants—that’s unacceptable. What we need to do is that we need to train our DAs, that we have to search, and we have to work to have a diverse jury, a jury of different understandings, different races, and not be afraid of people.”

He explained, “I can tell you right now that when I came into the DA’s office, that I found that people use stereotypes when deciding what jurors keep and what jurors to take, and they did not understand why I had so many Black jurors all the time. And I said, you just don’t understand how people think that when you’re back in that room, that you need a diversity of thought, you need people thinking differently because that’s the only way the system works.”

Pamela Price: “I’ve had the same experience as Mr. Wilson. I’ve showed up for jury duty in Alameda County, as well as in the federal courts where I do most of my work and I never get paid. They kick me off, but I’m often the only Black person or person of color period in the jury pool.

“At one point I went to the jury commissioner in San Francisco at the federal court and said, what is happening? And they said, well, this is the pool.

She added, “And again, I will monitor and train and hold the deputies to a standard that we won’t be filing—they won’t be allowed to, to disqualify Black or brown people or people of color on some pretext, which is what I’ve seen over and over again.”

Seth Steward: “I completely agree with both Ms. Price and Mr. Wilson. I had a conversation with a young Black man about three weeks ago, about his experience on jury service here in Alameda County.”

The man was on a jury panel in a case that started out as a death penalty case, “he said later it got moved to a life without the possibility of parole case, and he was still a potential juror and he was the only Black person that made it.”

He made it to voir dire, “where the two parties have an opportunity to ask the jurors questions. And the district attorney spent over 10 minutes on him asking him questions that he didn’t ask any of the other potential jurors, not one. And so that’s the exact type of experience that we need to change.”

Question: What distinguishes you from the other candidates running for district attorney?

Pamela Price: “I’m the only civil rights attorney that has a winning history of holding police institutions and corporations accountable for the people of Alameda County for the last 30 years.”

Seth Steward: “I am the only candidate in this race that’s an Air Force veteran. I’m the only veteran, period. I’m the only one that lives by the motto. These things we do that others may live.”

Jimmie Wilson: “It’s my experience, that I believe distinguishes me from the other candidates. I worked my way from the bottom up from the DA’s office and in doing so I have tried and handled some of the most complex cases that you can think of, but I, I’ve also trained police officers on how to do their jobs better.”