Davis, CA – As reported last week the city, county and developer agreed to both a tax sharing agreement and an MOU.  Critics of the project pointed out that the city’s fiscal impact had been projected to be $3.88 million annual at build out.

However, the revised figured was reduced with this agreement to about $3.64 million.  A slight decrease. 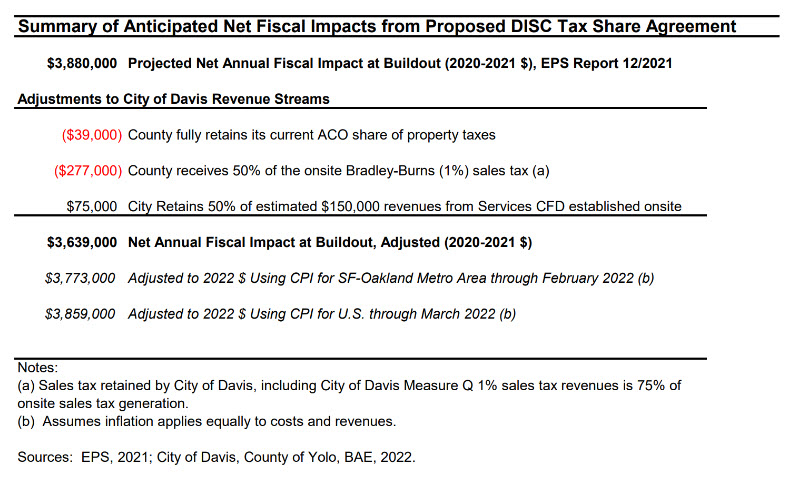 As the staff report clarifies, “The City net revenues at project build out after implementation of the above tax share allocations is $3,639,000 in accordance with BAE utilizing the EPS economic and fiscal
impact analysis as a base of analysis.”

However, some of that is simply accounting.  Staff points out, “The EPS analysis figures

The report continues, “However, more recent increases nationally in CPI have not yet been incorporated into the published Metro CPI Index. The City’s consultant, BAE, utilized the national CPI data that is available up through March 2022 to arrive at a net fiscal benefit figure to the City of approximately $3,859,000 after accounting for costs, revenues, and the proposed tax share agreement terms.”

Basically, as one source put it, “there’s really no reduction at all”—“negligible and when you account for CPI adjustments since the EPS analysis was done it’s no reduction.”

As another source put it—the critics are “not entirely incorrect.”

Under the tax share agreement the city benefit does drop by about $240,000.

However, “the reason the city found this acceptable is because it updated the 2021 numbers used in the EPS report to account for inflation and, when they did that adjustment, the city is right back at $3.859 million. So no real loss below what was anticipated.  And the county is happy.”

But actually there is a bit more here anyway.

“The Development Agreement calls for a CFD to be formed for the DiSC project specifically to create an additional revenue stream for community services and amenities beyond the project revenues already anticipated. Specifically, the DA calls for the creation of a CFD to generate a minimum of $150,000 per year at project build out.

“As part of the tax sharing agreement, it is proposed to share with the County the greater of 50% or $75,000 per year of revenues from the CFD specifically to go towards the maintenance, operations, or construction of the South Davis Library.”

Thus not only does the city retain half of the CFD that is estimated at $150,000 per year, but the other half “while technically going to the county directly benefits the city by way of helping fund the south Davis library.”

In short, even portions of money that go to the county directly benefit the citizens of Davis, specifically south Davis which has been wanting a library for some time.

Some will of course argue that the EPS analysis is overly optimistic.  The Finance and Budget Commission voted to accept the EPS analysis as reasonable and, frankly, I have always believed that the figure is a low figure not a high figure.

Regardless, I have yet to see a workable alternative for revenue generation in the city that is not based by overly optimistic or, shall we say, magical thinking.

Share:
Tags:DISCFiscal AnalysisSouth Davis Library
Previous : Commentary: SF Mayor Breed Doubles Down on Copaganda with Supervisor Appointment – She Appoints the Chief Copagandist
Next : Student Opinion: As the Pandemic Ends, the Title 42 Immigration Restrictions Will Too

2 thoughts on “Commentary: Does the Tax Sharing Agreement Reduce the City’s Take from DiSC? Yes, but No”