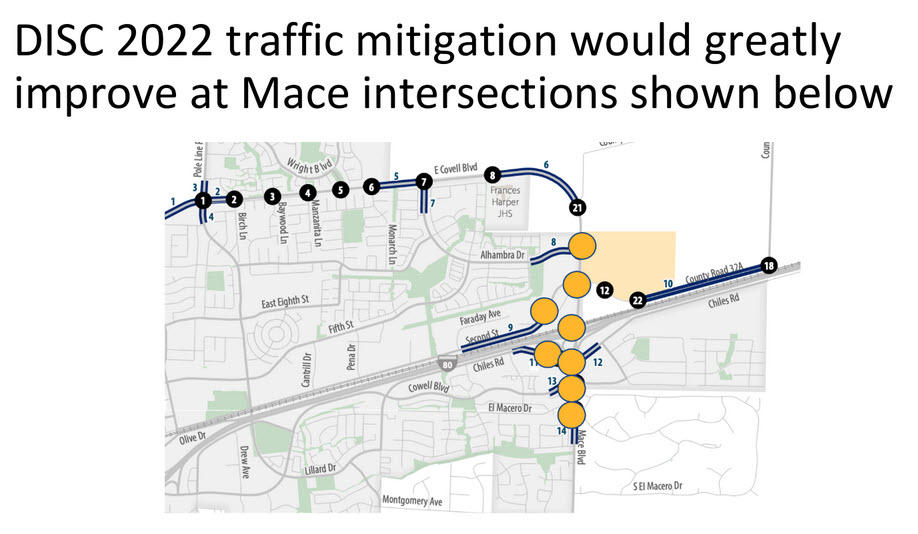 Davis, CA – I belatedly caught up with a Measure H discussion during the Chamber’s candidate forum from last week.  It was Matt Williams for the no side taking on Wesley Sagewalker from the Yes on H side.

What struck me was a comment by Matt Williams early in the discussion on the traffic study.

He said, “But you have heard that the traffic study has said that it’s going to improve traffic times at intersections. Well, there’s a very good reason for that. The standard for traffic studies looks at an intersection from all four directions. And any of you who have lived with the current traffic problems on Mace north of I 80 know that the problems are heading southbound. We have no problems heading northbound. So what we have is the improvements that affect northbound eastbound and westbound overwhelming the real issue, which is southbound.” 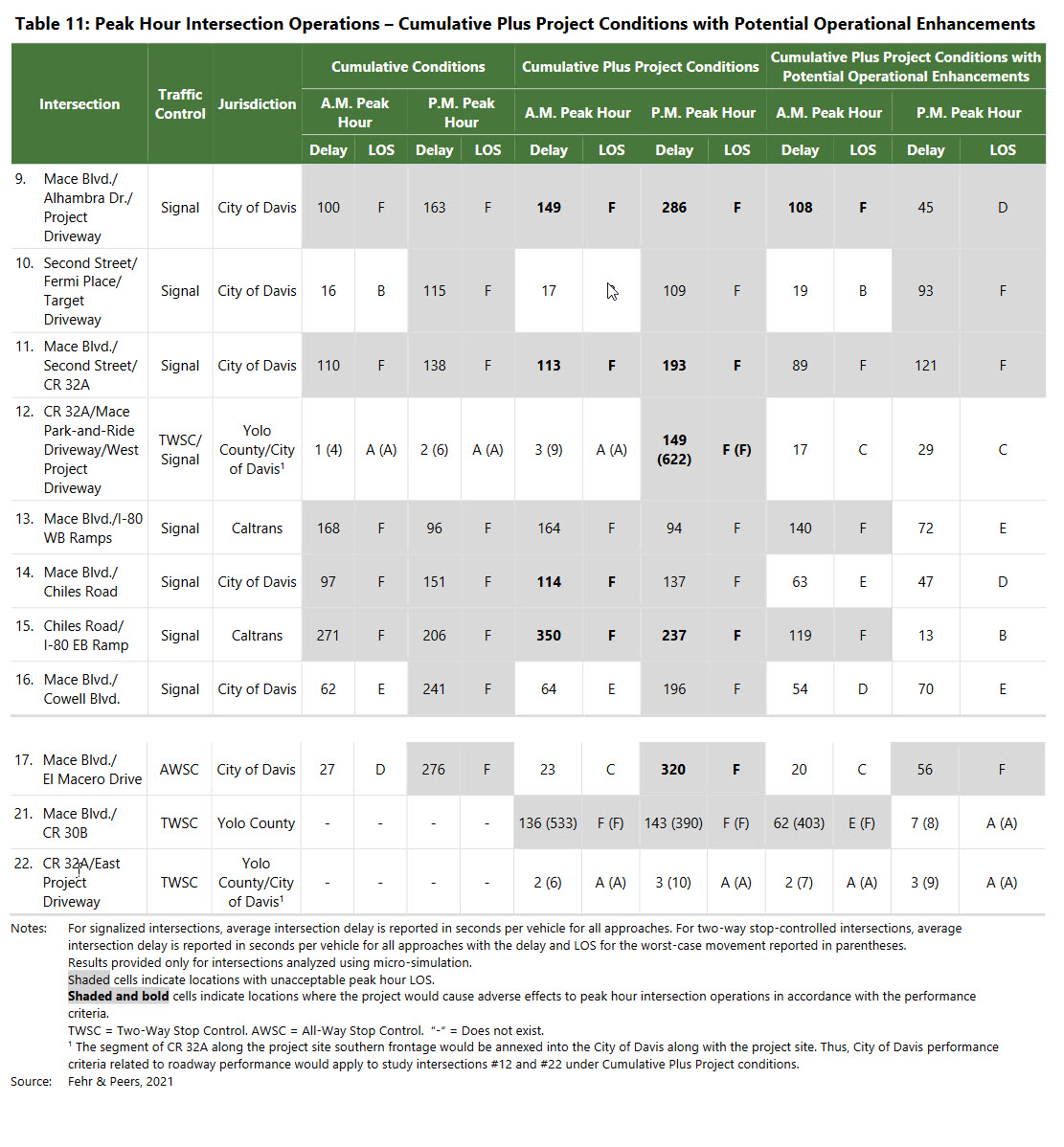 That didn’t make a whole lot of sense to me, so I started by looking at the traffic study itself.  The chart above is from page 43, and you can see that the project does have a major impact on traffic and causes some pretty substantial delays.  But once the mitigation measures are put in place, those delays fall by quite a bit and in some cases actually improve over existing conditions.

That’s where the claim comes from that the project will actually improve Mace in the southbound direction over existing conditions.

Now I understand that there is some skepticism over that claim – and I think that skepticism is fair game for criticism.

However, what Matt Williams is arguing is that basically what is happening is that the improvement in the other four directions is trumping the traffic impact on Southbound Mace.  That makes no sense intuitively and after doing some research is in fact false.

Matt Williams is correct on one point: “For signalized intersections, average intersection delay is reported in seconds per vehicle for all approaches.”

So theoretically his point could make some sense.

But let’s look at the first intersection – 9 – Mace and Alhambra.  Right now during the PM peak hour there is a 163 delay.  That increases to 286 second (nearly five minutes) with the project.  But with the enhancement it drops to 45 seconds.

So you are telling me that Southbound Mace which is causing the delay is going to have its impact offset from just under five minutes to just under a minute all through improvement on Alhambra.  That makes no sense.

And it turns out, it is actually incorrect. 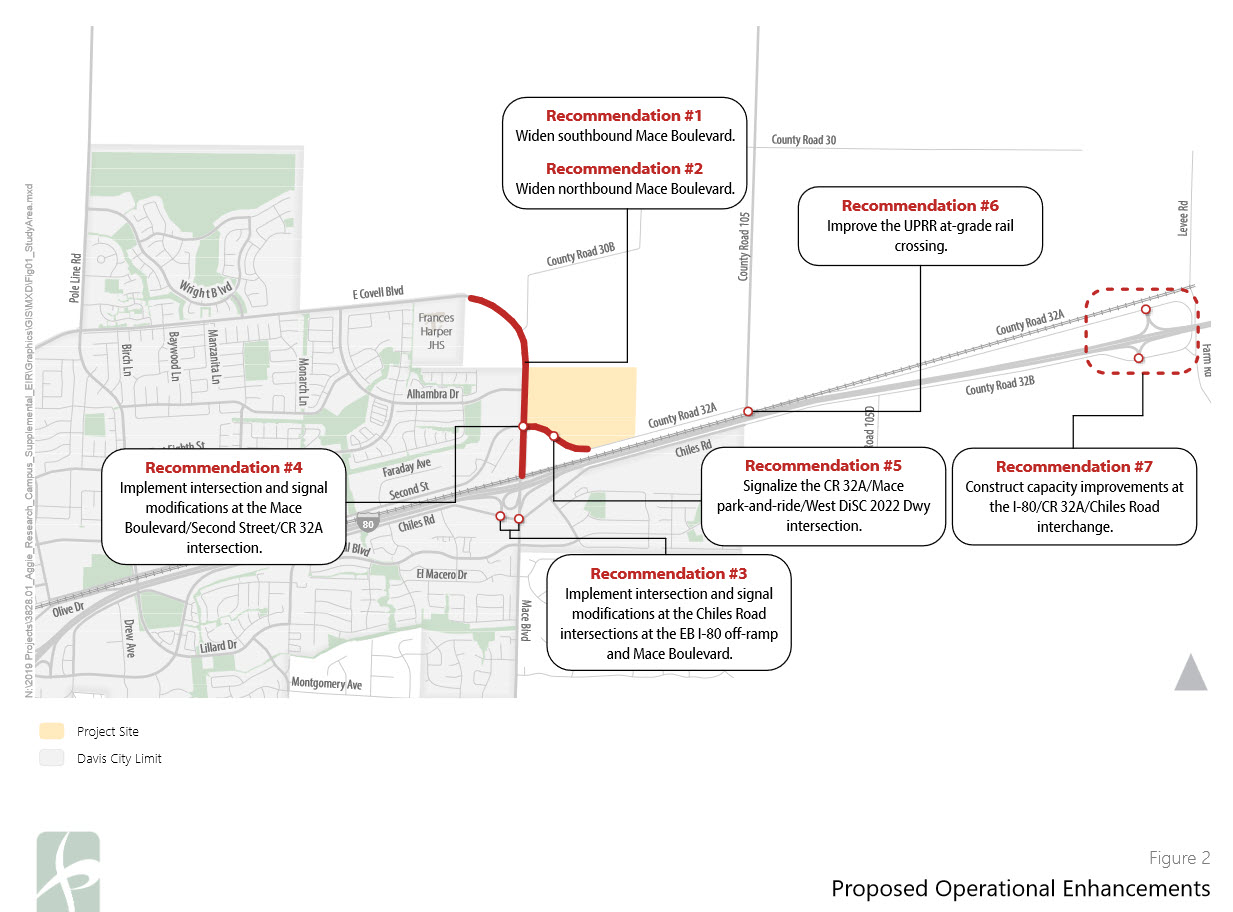 As was explained to me – the delays is actually a weighted average – weighted by traffic volume.  The vast majority of that at most intersections is produced on southbound Mace, though obviously traffic turning from Alhambra and Second Street onto southbound Mace is backing up some as well.

However, in the areas where there is not considerable delay, there is no room for improved traffic flow with the various improvements cited by the project.  Those other directions in other words are not offsetting the worsening traffic on Mace under the Project Plus Operational Enhacements condition.

Bottom line, the vast majority of the improved traffic flow will in fact be where it needs to be on southbound Mace and the comment by Matt Williams was off-base.

32 thoughts on “Commentary: Traffic Comment by No on H Makes No Sense”