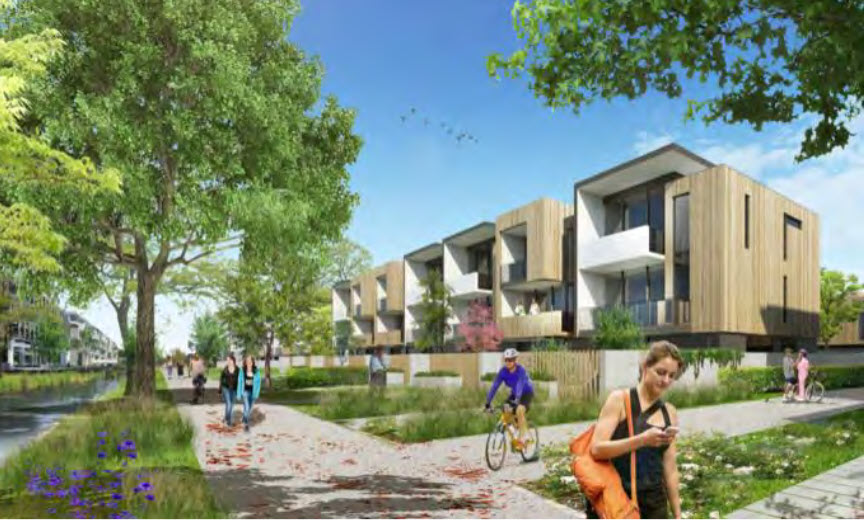 “The No on Measure H campaign recently sent out an argumentative mailer opposing the proposed Davis Innovation and Sustainability Campus (DiSC 2022). Not surprisingly, the flyer uses various forms of misinformation to try to scare Davis voters into rejecting this pivotal measure on the June 7 Primary ballot. While there are a lot of inaccurate claims and outright falsehoods that could merit a response, I want to focus specifically on the description of DiSC as a “sprawling car-centric 102-acre business park.” 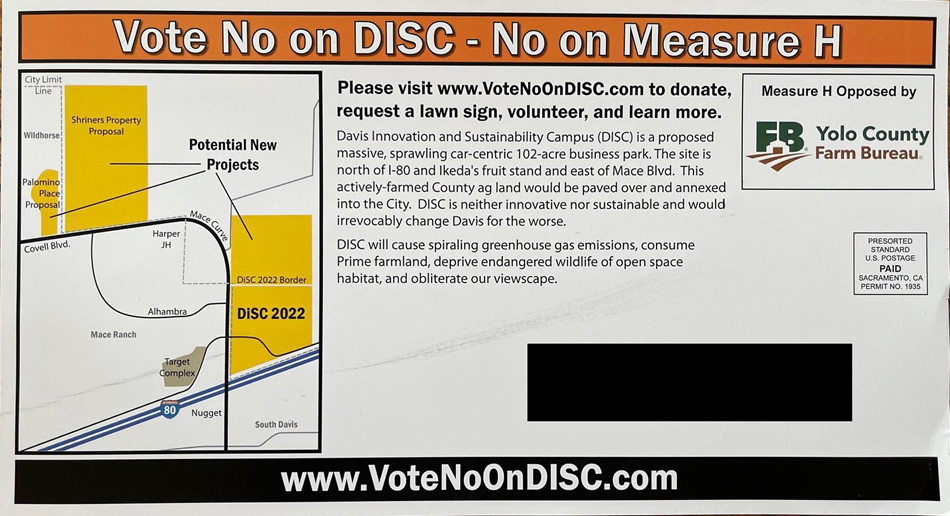 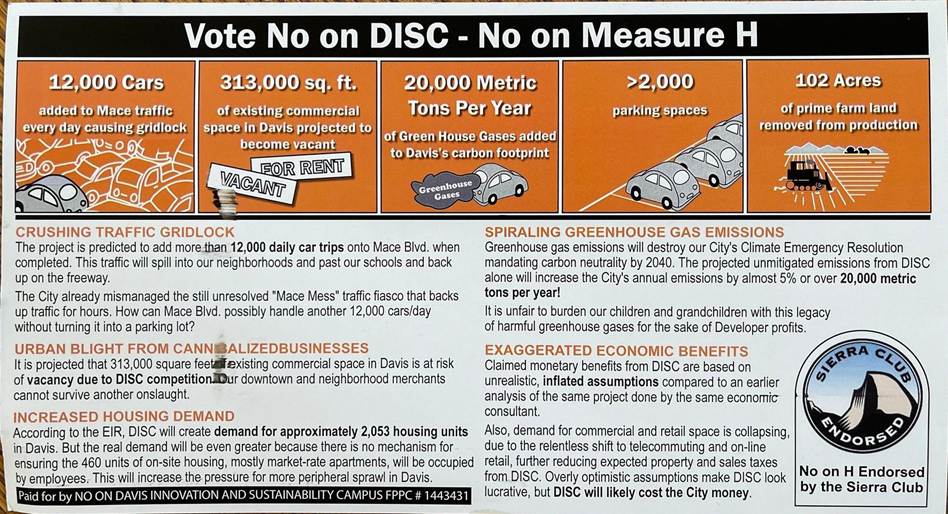 Let’s explore the allegation that DiSC is “sprawling,” starting with the proposed residential development component. Measure H will authorize the construction of 460 housing units on approximately 12 acres of land, which makes for a density of slightly higher than 38 dwelling units per acre (dw/acre).

Compare this to a neighborhood less than half a mile away from where DISC will be built. The area in question (outlined in the image below) has the prescribed borders of Alhambra Dr. in the north, Arroyo Dr. in the east, the houses south of Arroyo Dr. in the south, and Caricia Dr. in the west. The neighborhood is zoned for purely single-family residential. It is approximately 28.25 acres in size and contains 131 housing units. This works out to a density of 4.64 dwelling units per acre. 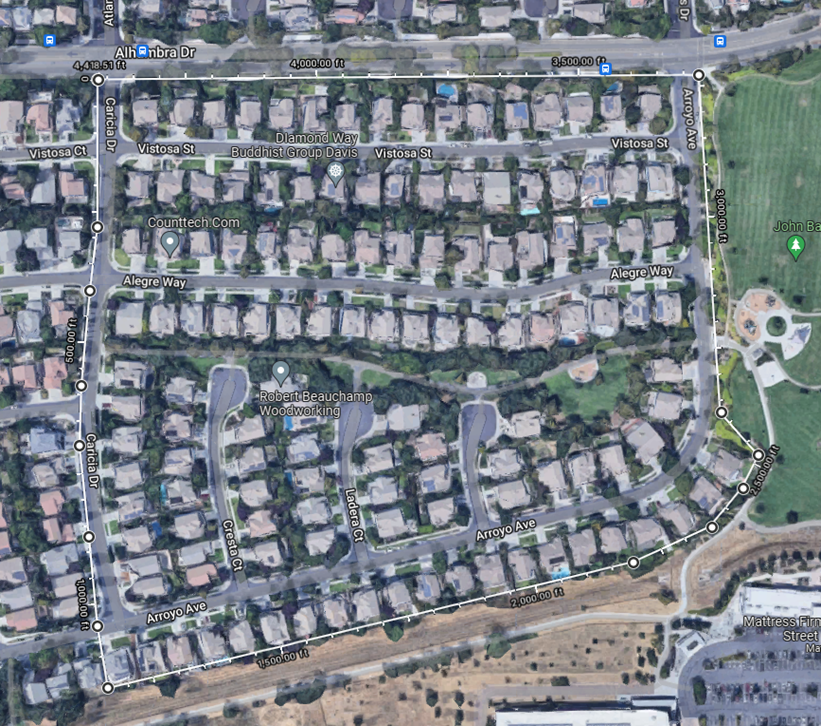 The housing that would be built if Measure H passes is more than eight times as dense as this neighborhood. Put another way, DiSC housing will take up less than half the acreage while providing 3.5 times more units for people to live in. If the No on H campaign is concerned about sprawl, it should take issue with the existing low-density single-family neighborhoods that comprise the vast majority of East Davis, and not the residential units being built as part of DiSC 2022.

Some may point out that this comparison hones in on just a small section of Davis, so let’s expand our assessment a bit. If our residential density calculations include the entire area of the DiSC project and not just the areas that will be zoned for housing, we get a density of 4.51 dw/acre. According to the American Community Survey, the City of Davis is 6348 acres and contains 24,973 housing units – a density of 3.93 dw/acre. This calculation is factoring in every land use type in the city and the DiSC project, and it still shows that DiSC 2022 will be more densely populated than the rest of the city.

On top of that, the degrees to which Davis and DiSC are respectively composed of land zoned for residential use are starkly divergent. While the vast majority of Davis’s land is zoned for some form of residential (low, medium, high, mixed-use, etc., seen in the map below), only 11.8% of the land that’s part of the DiSC proposal will be residential. This means that DiSC will achieve a higher housing density than Davis despite its residential zones representing a much smaller percentage of its total land makeup.

What about the non-residential elements of the project? DiSC as a whole is far from a sprawling development, at least in terms of its diverse land uses and especially in comparison to how Davis has principally developed since the mid-20th century. For decades, the city followed national suburbanization trends and expanded its borders to accommodate swaths of new development. Zoning code mandated (and continues to require) that almost every pocket of these newly built areas be restricted to a single type of land use (e.g., single-family residential or exclusively commercial/retail space).

This single-use zoning for new land development had profound effects on the city’s urban landscape because it forced Davis to build out instead of up. As a result, large sections of the city today are still restricted to one type of land use. This is how sprawl conquered our built environments: Because more people began to reside in exclusively single-family neighborhoods, they lived farther away from retail, school, work, and pretty much everything else. This forced residents to drive everywhere, which increased the use of private automobiles and spurred the construction of more sprawl.

By comparison, DiSC 2022 is a mixed-use development with multiple land uses. In addition to providing some of the densest housing in the city, Measure H will zone more than 25 acres for mixed-use commercial and laboratory space and more than 32 acres for advanced manufacturing. These uses would traditionally all be built in separate locations far apart from one another. Including all of these development types in a 102-acre footprint will provide some of the most compact and diversified land use concentrations in the city’s history.

I also want to address the misrepresentative visuals on the flyer’s map that show the location of the project. The campaign is trying to be as deceptive as possible by including the boundaries of DiSC 2020 and the highlighted areas of proposed developments that have nothing to do with DiSC. They are trying to give the illusion that the project will have a much greater footprint than it will in reality. I believe that voters will be able to see through this blatantly misleading use of visuals.

The claim from the No on H campaign that DiSC is “sprawling” is unfounded when you look into what will actually be built on this concentration of land. It demonstrates either a lack of understanding for what constitutes sprawl (and a contradictory belief that existing sprawl in Davis is acceptable) or a willingness to mislead voters about the true nature of the project. Perhaps it’s both.

The second descriptor of DiSC 2022 from the No on H campaign mailer—that Measure H will create a car-centric community—doesn’t hold up any better under scrutiny.

The No on H campaign might agree that we should be investing heavily in alternative transportation methods, including public transit, bicycle and pedestrian infrastructure, so that people do not have to rely on private automobiles to get to where they need to go. Measure H will accomplish a lot of this: A 1.5-mile long bike/pedestrian trail will circumnavigate the development area and connect with Davis’s existing trail system, which means residents and employees will be able to get to the rest of Davis safely without the need for a car. Gaps in bike lane coverage on the Mace Curve will be filled in, and land for a fully grade-separated bike/pedestrian crossing over Mace will be acquired.

Measure H also authorizes the construction of a transit plaza just south of the Mace and Alhambra intersection that can accommodate up to three buses at once. This stop will be serviced by Unitrans’s A, P, Q, and Z lines, in addition to service from Sacramento Regional Transit and Yolobus. It will be no more than a half-mile walk from every structure that’s part of the project. An electric shuttle will also provide direct service to Amtrak, Downtown Davis and the UCD campus. This means residents, employees, and visitors alike won’t need to use a car to get to the main transit/activity hubs in the city.

These investments make DiSC a transit-oriented development. The entire project will be within walking distance of multiple bus lines that can get you to Sacramento and anywhere in Davis. DiSC embodies the recognition that it is efficient and sustainable for residential, commercial and leisure space in close proximity to public transportation. No matter what the No on H campaign promotes to voters, a development of this sort is inherently not “sprawling” or “car-centric.”

The backside of the flyer lists figures about the project’s supposed dependence on private automobiles. One of the main negatives cited is that DiSC will have more than 2000 parking spaces. This is a bit of a disingenuous argument; if DiSC 2022 contained zero parking spots, the No on H campaign would certainly list that as a negative and ask, “Where are people going to park?”

The campaign also conveniently leaves out the reason behind those parking spaces. Davis’s Municipal Code establishes minimum parking requirements for specific land uses in the city. The nature of the proposed DiSC project means that the developers must build 2050 parking spaces. To be sure, these mandatory parking minimums are fundamentally detrimental to our climate goals and are inconsistent in principle with Davis’s Climate Action Plan. It’s a shame that any project is mandated to build more parking than is often necessary; even so, Measure H’s commitments to sustainable modes of transportation help offset this cost.

The No on H campaign is misleading Davis voters by focusing solely on the project’s vehicular impact in an attempt to convince voters that DiSC will unleash carmageddon on city streets. In actuality, DiSC is a fundamentally transit-oriented community that will incorporate many 21st-century sustainable transportation solutions.

Finally, let’s explore the whole description of DiSC 2022 as a “sprawling car-centric business park.” The statement is an attempt by the No on H campaign to invoke 1960s-era low-density office parks with such abysmal land use that the parking lots take up much more space than the office buildings. Davis contains several of these types of business parks, most notably in South Davis along Drew Ave and East Davis along 2nd St and I-80.

The campaign wants voters to translate their mental images of these areas to DiSC, but DiSC is nothing like these developments. Describing the entire project as a business park is a truly ridiculous assertion. This so-called “business park” will contain enough housing for more than a thousand people, provide nearly two dozen acres of new park/open space, and contain tens of thousands of square feet for new businesses to find a home in Davis, in addition to hundreds of thousands of square feet of laboratory and advanced manufacturing space. If this is a business park, it is the coolest business park the city has ever seen.

Misleading messaging from the No on H campaign about DiSC 2022 should serve as a reminder to Davis voters to remain vigilant about the spread of misinformation during election cycles. It is telling that the only way the No on H campaign seems to think it can get enough support to strike down DiSC 2022 is to openly mislead people on the nature of the development. I humbly ask that you, Davis voters, don’t fall for this. Please reject these inaccurate and erroneous claims by voting Yes on H on your Primary ballot.

Jackson Mills is a student at UC Davis, Director of Political Affairs for the Davis College Democrats, and bus driver for ASUCD Unitrans.

14 thoughts on “Guest Commentary: Debunking Deceptive Descriptions of DiSC in No on H Campaign Messaging”