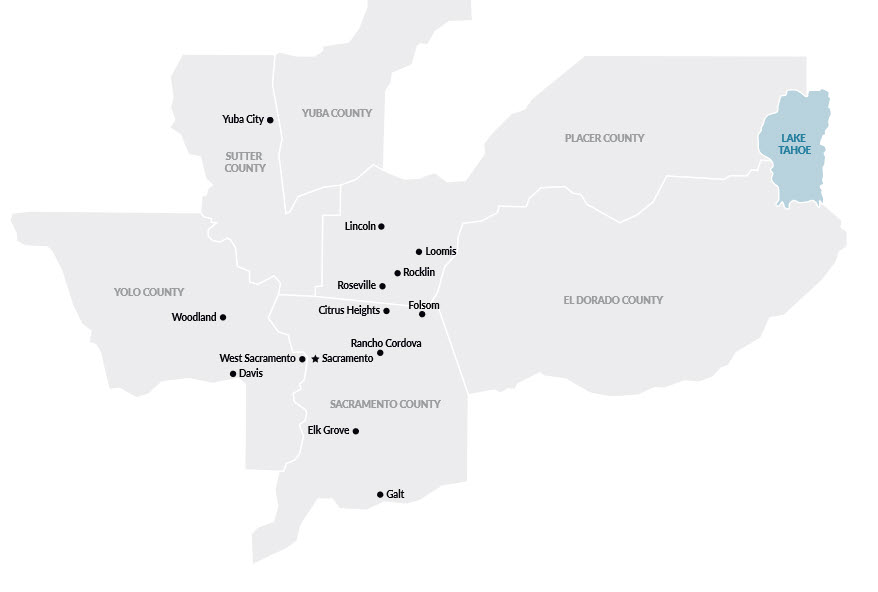 Sacramento, CA – A report this week released by the Greater Sacramento Economic Council and Newmark, found that the “region is one of the fastest growing in California and one of the most diverse in the country. Just 88 miles from the Bay Area, the region’s talent pool is unmatched and investors are taking note. Over $13 billion was invested in Greater Sacramento over the last five years – with roughly $4 billion invested just in 2021.”

Indeed, “With all this activity, business relocation and expansion projects in the region jumped 19% in the past year alone.”

Overall the White Paper found “the Greater Sacramento region is on a major growth trajectory as investment, population increase and expanding opportunities for talent and education go into overdrive.”

Among the key findings, “Venture capital activity jumped significantly in the past year, including multiple IPOs, a $1.8 billion SPAC merger and an $800 million venture raise. The region has also seen interest for

business relocation and expansion jump about 19%, while year-over-year net migration soared 56% in 2020.””

It also found this was a highly educated and diverse workforce.

“About 734,000 students are enrolled in two- and four-year institutions within 100 miles of Greater Sacramento, and the region ranks third in the nation for diversity in both tech and STEM,” much of that of course due to the presence of UC Davis.

“Greater Sacramento has seen incredible market momentum over the past five years,” said GSEC President & CEO Barry Broome. “There’s been a real shift in how executives across the country and world view our region. These leaders recognize that Greater Sacramento is the place to do business in California.”

While areas of California and the nation have struggled, “Greater Sacramento’s regional economy showed incredible resilience during and after the pandemic as it continued to attract investments and make progress on significant projects”

In a release, GSEC noted, “To spotlight this growth and further entice others to the region, GSEC is launching the Capital Momentum campaign, an initiative that will highlight groundbreaking developments and opportunities within California’s capital region. The campaign will be geared toward decision-makers and national site selectors for major companies.”

Unlike other areas of California the Greater Sacramento Region has grown over the past five years and “is expected to grow even more over the next five.” 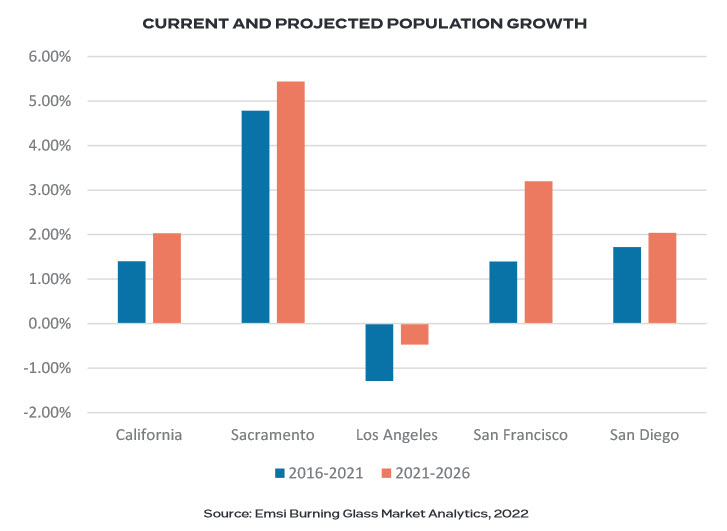 They found, “The region is growing faster than all major California markets and the state as a whole. Greater Sacramento has grown by about 5% since 2016, adding 117,783 net new residents. Greater Sacramento’s growth is expected to accelerate over the next five years, increasing the population by 5.4%.” 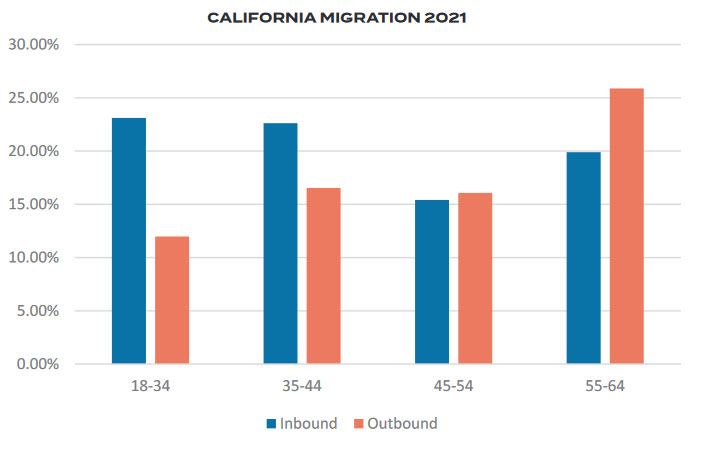 Moreover, it continues to be a draw for young talent.

One finding is a “a net positive migration to California of individuals between 18 and 44 years old.” Furthermore, “millennials (ages 25-39) make up the largest share of the region’s population. The region has 543,534 millennials, more than the national average of 525,754 for a similar sized market.”

Diversity has also increased.  “Sacramento is the second most diverse city in the United States (2020 U.S. Census). There are 1.26 million racially diverse people in Greater Sacramento, 22% higher than the national average of 1.03 million for a similar sized market.” 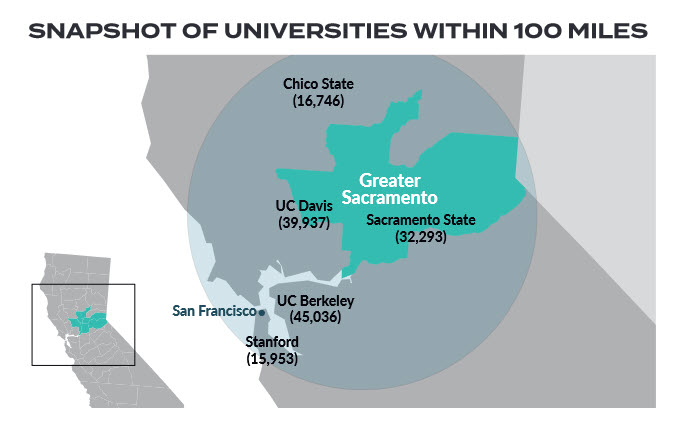 Furthermore, its location near a huge center for universities makes Greater Sacramento “an increasing attractive market for companies seeking educated, young professionals.”  The report notes, “The region is home to a strong higher education system and is just 90 miles away from the San Francisco Bay Area, which boasts some of the best universities and talent in the world.” 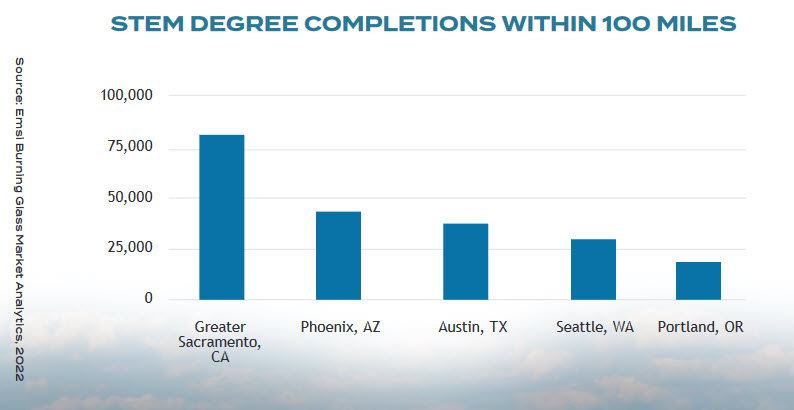 Greater Sacramento also has a strong STEM base, with “nearly 2x more STEM degree completions within 100 miles than Phoenix and Austin.” 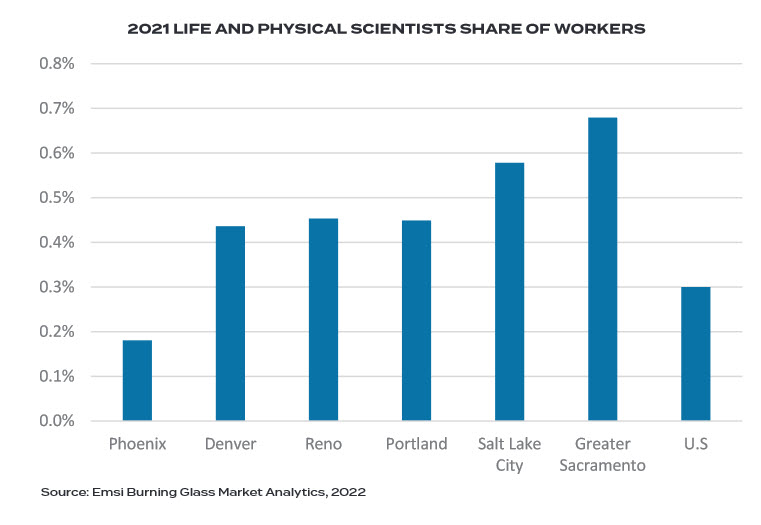 The region also boasts a large share of life scientists—most among peer groups and twice the national average.

The report found overall that the “office market remained stable over the last few years, in spite of the COVID-19 pandemic. The vacancy rate was 12.1% in the first quarter of 2022. Over the past two years, the office vacancy rate fluctuated between 10.1% to 12.1% but the quarterly vacancy changes were minimal.”

Finally the report found: “Momentum in Greater Sacramento’s population growth and industry advancements is driving the creation of new developments that will change the economic landscape of the region” 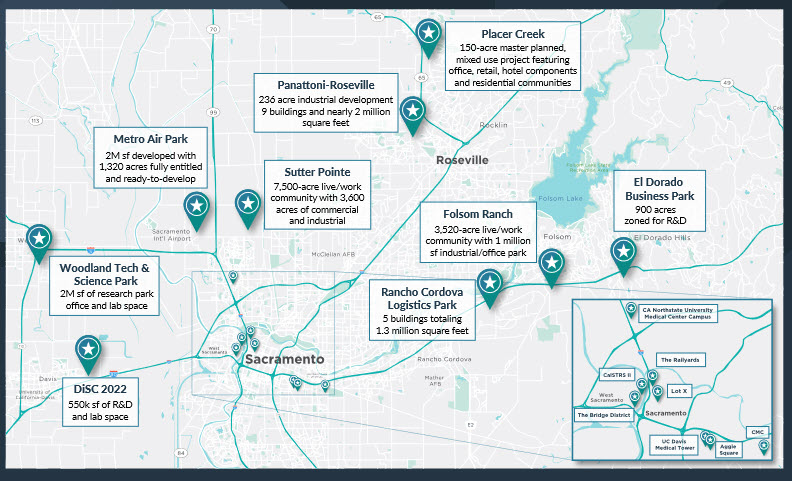 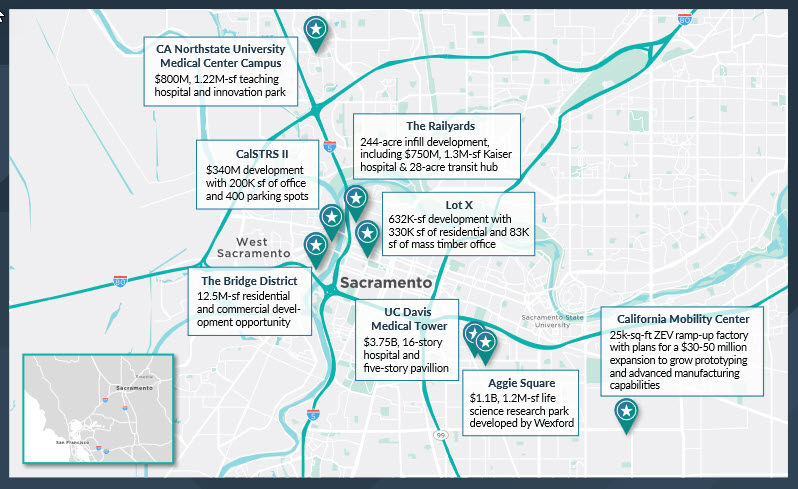 The report concludes: “The region continues to attract diverse talent and offers access to one of the strongest labor markets in the nation, with more than 730,000 students within a 100-mile radius and high STEM degree completions. As more people are drawn into the region, companies and investment will continue to grow.

“Venture capital activity was at an all-time high in 2021 and business relocation and expansion projects jumped 19%. These trends are expected to continue in the coming years and are fueling additional investment.”

Finally, “As key developments become available, the region is set for an unprecedented economic shift.”