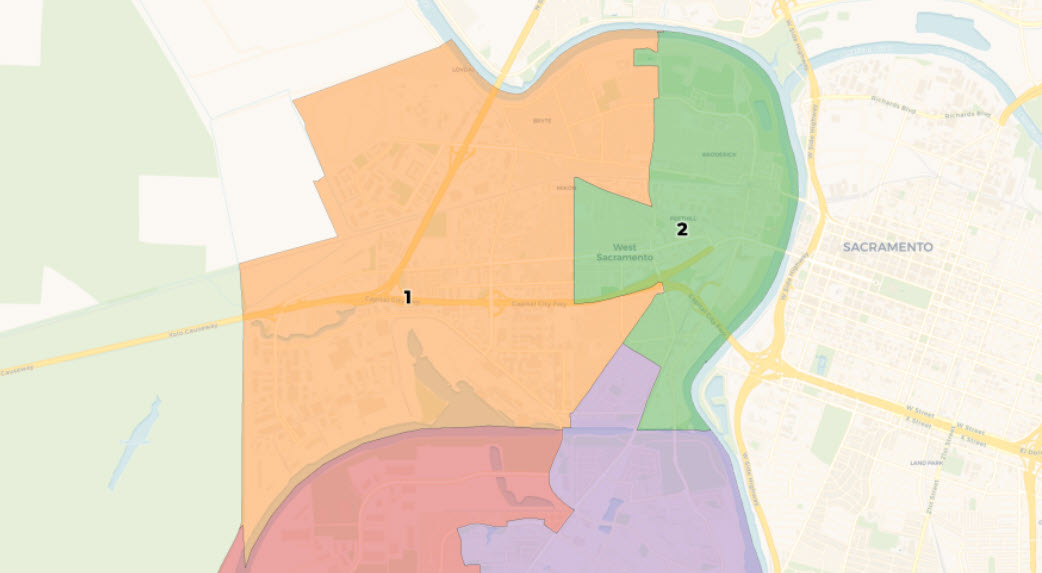 Woodland, CA – A judge agreed with plaintiffs on a challenge to West Sacramento Redistricting not to divide the Broderick/Bryte neighborhood into separate city council districts.

Judge Samuel McAdam wrote, “There can be no doubt that the Broderick/Bryte neighborhood is a community of interest deserving ranked priority against division.”

He added, “It is also apparent that when the parties entered into the Settlement Agreement, the plaintiffs would have reasonably believed that the City would not divide, or at least would have minimized division of, its neighborhood when drawing the district lines.”

He wrote, “This is the exact type of neighborhood the FAIR MAPS Act was designed to protect—namely, a geographically continuous, compact, easily identifiable, and historically disadvantaged, low-income neighborhood with a long history and a common social and economic profile.”

Judge McAdam ruled that the City’s Map 4A is “NOT compliant with the FAIR MAPS Act.”  He specifically wrote that the city “wrongfully divided the neighborhood of Broderick/Bryte.”  He noted that the division was not minimized and was not shown to be necessary as a practical matter.

He found that the map of the plaintiffs was compliant and incorporates most of the boundaries set forth in the Equity Map produced during public hearings.

Judge McAdam writes, “It incorporates broad decision-making modelled after other maps, like Map 2 and Map 6, which were subject to extensive public review.”

The City’s consultant reviewed the map and raised two objections: “(1) the map targets an incumbent, and (2) the map was not submitted for public comment or approval.”

The lawyers for the City raised a third objection, “namely that plaintiff’s counsel cannot be a ‘witness-advocate’ for his own clients in a Court proceeding.”

Judge McAdam believes that “the motives of and impact on incumbents does not appear to the Court to be a fact6r the plaintiffs’ used in drawing the lines. Rather, the evidence shows, that the lines were drawn to preserve neighborhoods and communities of interest.”

While the judge agrees that the attorney did commit numerous violations of the Rules of Court, he writes “what is the remedy here?  The goal is due process, and on a matter of such great public concern, it is important not to let relatively minor infractions impact adjudication of the dispute on the merits.”

The West Sacramento City Council met in closed session Thursday evening and declined to appeal the ruling—allowing the ruling to stand.

The plaintiffs submitted extensive evidence at the public hearings, supporting their claim that the Broderick/Bryte neighborhood was a “community of interest” that under the terms of the CVRA “should not be divided.”

Among these include the fact that historically they have been considered a single neighborhood, that they are within one school district and the children attend the same elementary and middle school.  The neighborhood is within a single district of the Board of Supervisors, separate from the majority of the school and it is a “low-income neighborhood with a disproportionate number of residents who fall below two-times the poverty level.”

Further, it is home to immigrant families, particularly Latino and Russian, and the residents are less likely to own a vehicle or have a computer in their home, and more likely to rent rather than own a residence, and those who do own a home have a lower home value than that of other neighborhoods.

A guest piece by Carlos Alcala, whose wife, Norma Alcala, sits on the council, noted Alfred Melbourne states in his declaration to the court: “Our organization, Broderick/Bryte Neighborhood Association, has collected over 150 signatures to protest the division of our neighborhood into two city council districts. Mobilized by this issue, we have also created the attached Facebook page, which has hundreds of supporters. We support the plaintiffs’ map and strongly oppose Map 4A.”

Attorney Scott Rafferty explains why Map 4a is so unfair to one-quarter of the City’s population that lives in Broderick/Bryte, in that it makes it highly unlikely Broderick/Bryte will ever be able to elect their own representative, but Orozco’s area will have two councilmembers:

“In order to assure this dedicated voice on the council, it is appropriate for a Latino or Asian community to optimize on one strong remedial district based in the most cohesive and well-organized neighborhoods. Council member Dr. Early-West instructed the Latino community that combining Broderick/Bryte in Plaintiffs’ Map creates a ‘supermajority district,’ and that they were better off with ‘two voices’ from weaker influence districts. 34 percent CVAP is not guaranteed control, let alone a ‘supermajority.’ As detailed in the opposition, all three Cabaldon slate members echoed this pretense. They are dividing the Latino population in order to conquer it; neither of the so-called influence districts will be accountable to Broderick/Bryte. The affluent, white neighborhood of Old West Sacramento may well determine both elections under Map 4A.

“Plaintiffs’ map minimizes the number of South-of-50 voters in northern districts. The Equity Map was a compromise. Therefore, regardless of year, census geography, and allocation method, any ranking of Latino CVAP shows that the plaintiffs’ map is highest, then the Equity Map, then Map 4A. Actual voter registration and turnout provide even more dramatic evidence that Map 4A would eliminate Latino influence.”