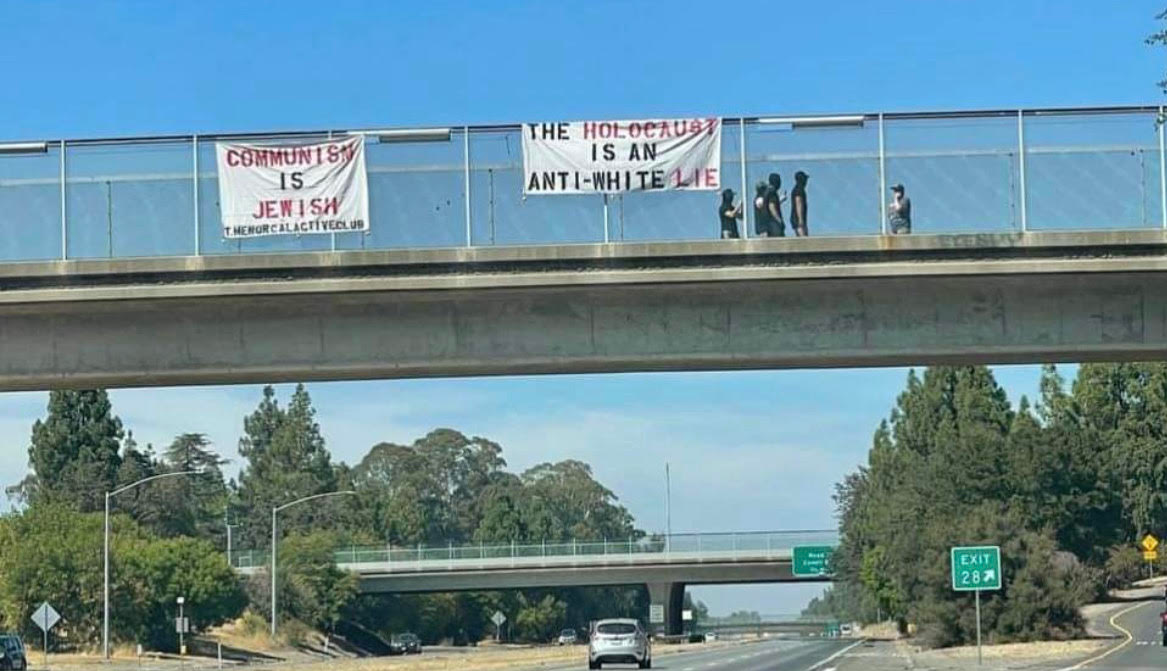 Davis, CA – On Sunday afternoon, a group of men dressed in black were spotted on the Hwy 113 bike overpass with banners unfurled stating, “Communism Is Jewish” and “The Holocaust Is An Anti-White Lie.”

According to the incident report, at 3 pm, the banner was spotted.  One of the witnesses confronted the subjects and attempted to remove the signs.  A verbal argument ensued but there were no injuries reported.

“The subjects were filming encounters with counter-protesters and law enforcement and may have been trying to illicit responses,” the police report stated.  “They took down the signs and left on foot, later displaying their signs on the

Russell Blvd overpass, according to the Davis Police.

According to Davis Police Chief Darren Pytel, “They were dressed in black with faces covered.  UCD Police didn’t detain them and they lost them on campus before they could ID them or any vehicles.”

University police have determined this to be a hate incident of concern to the campus community.

In a statement from Chancellor Gary May on Sunday, “We are sickened that anyone would invest any time in such cowardly acts of hate and intimidation. They have no place here. We encourage our community to stand against anti-Semitism and racism. Our Principles of Community remind us to “strive to build and maintain a culture based on mutual respect and caring.””

He added, “White supremacy, hate and intimidation have no place here.”

Davis Mayor Lucas Frerichs added, “I am disturbed to see the photos of these banners being hung from a prominent local overpass.  Hate has no place in Davis, and a common denominator to Holocaust deniers is Anti-Semitism.  As Mayor, I unequivocally stand in support with our Jewish community in Davis, UC Davis and beyond.”