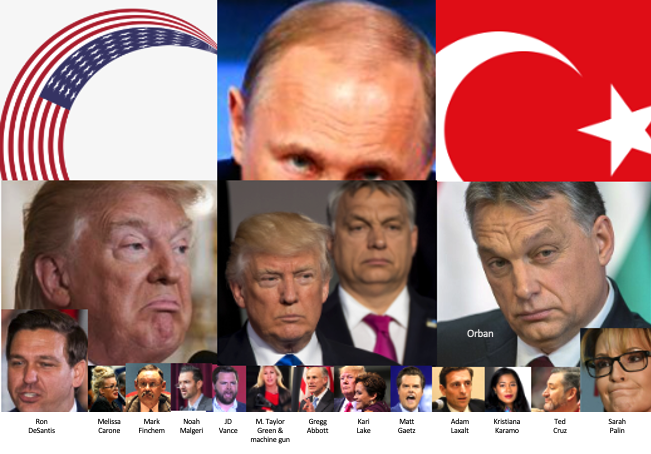 The answer is working Americans working together. The Biden administration signed laws to force pharmaceutical companies to lower drug prices, apply a minimum tax for corporations, provide veterans (exposed to military waste burn zones) medical care, and take steps to provide us with clean domestic energy security. That’s what government is for.

Most Republicans, most people, independent or otherwise, want corporations to pay taxes, want to stop being gouged by pharmaceutical companies, care for our veterans, and want to have the energy we need to heat and cool our homes and get us where we need to go without sending our dollars to Russia or Saudi Arabia. Having government for the people and not a government reaching into your doctor patient relationship that is what US people want.

Some Americans are all for lining up behind an Orbanesk dictatorship. Donald “We love Hungary” Trump is one of them. Trump who applies the toddler rules of possession to national security documents. “If I like it, it’s mine. If it’s in my hand, it’s mine. If I can take it from you, it’s mine.” For Trump, national security is not the issue. He would say, “public office would just be so much better if it was just 100% me.”

Who is lining up behind the MAGA “minority alt-right grab America” way? Who is willing to take democracy down to do it?

#1 Ron DeSantis: 15 week total abortion ban – no exception for rape, incest or human trafficking. He, and the gerrymandered Republican legislature, overturned a 2020 law, passed overwhelmingly by Florida voters, to reinstate voting rights for 250,000 people who served their time. A king of voter suppression, he has also put in place a law that makes it a crime for public employees to say “gay.” Now if you say gay you might be ineligible to vote? This is not enough for DeSantis. He is jealous of other US MAGA Orban Putin power leaders who are prepared to decertify elections if their chosen candidates do not win.

#2 Ted Cruz: Texas “Beautiful Ted”(Trump’s nickname) Cruz. A name earned while in Cancun, waiting out ice storms that knocked out power for weeks in a freezing Texas. The Texas state bar petitioned to remove Ted Cruz’s license to practice law after he “moved beyond his position as a United States senator” by agreeing to represent President Donald Trump and Pennsylvania Republicans as an attorney in litigation contesting the 2020 election. Cruz can also be credited with the “hide behind/nothing to see here” bearded culprit look.

#4 Matt Gaetz: Florida congressman suggests people shoot Silicon Valley executives calling such acts “an obligation to use the Second Amendment.” No matter that the second amendment has nothing to do with shooting businessmen – like them or not. Gaetz recommendations to shoot those you disagree with follows a long troubling history of sexual abuse crimes. A MAGA standard bearer.

#5 Adam Laxalt: Nevada US Senate candidate earned the title of “Nevada’s Rudy Giuliani.” Laxalt does not perspire brown streaks of lies, but he is banking his entire campaign for Senate on the “stop the steal” slogan and not much else. He is already lining up resources to sue if he does not win in November. “It’s sad that Nevada supports abortion rights.”

#7 Kristina Karamo: running for Michigan Secretary of State. Calls all abortion “child sacrifice,” and is certain demonic possession is real. Maybe just an old school headline grabber, she has personally testified that the election was stolen even after her own state upheld the 2020 election after 200 audits disproved fraud had occurred. This a conclusion reached by a Michigan Republican sanctioned report.

#8 JD Vance, living in SF and running for Senate in Ohio. Taking money from famed anarchist Peter Thiel (renowned hater of democracy) who suspects officeholders of imposing a “brain-dead, one-world state.” Vance’s bankroller is a short step away from believing that “electoral losses can be treated as inherently illegitimate and nonbinding,” reports the Washington Post.

#9 Noah Malgeri, Nevada District 3 Congressman openly called for America’s top general, Mark Milley, to be hanged before a live TV audience. Malgeri believes Milley was part of an elitist group that attempted to stage a coup against Trump.

#10 Melisa Carone: Having been barred from running for State Senate in Michigan she is running for Lieutenant Governor. Carone made bizarre statements of election fraud under oath, pushes white nationalism, voter restrictions and banning selected history from schools. Carone is a Marjorie Taylor Green protégée and, unlike GA’s 14th District, Michigan’s legislature wants no part of her, proving that not all Republicans will let MAGAs take control.

# 11 Kari Lake: running for Arizona Governor, called for Democratic Secretary of State Katie Hobbs (also a 2022 gubernatorial candidate) to be imprisoned for unspecified election crimes (make ’em up.) Lake believes that the topic of abortion is just a tactic to hide people from the truth (about the stolen election) and her position is that abortion should be determined at the state level – echoing trend setter Lindsey Graham.

# 12 Lindsey Graham: South Carolina, framed the most recently quoted position of Republicans about abortion “I think states should decide the issue of marriage and states should decide the issue of abortion.” What Graham, and what most Republicans running are saying, is that who you choose to marry, what type of health care and when a woman receives health care should be up to gerrymandered Republican State legislature (or one party nation.)

#13 Sarah Palin: The Alaskan has not run for public office since 2008. Palin had this to say about COVID healthcare. “It’ll be over my dead body that I get a shot. I will not. I won’t do it and they better not touch my kids either.” Palin, after her now famous August loss to Mary Peltola in the special house election, chose these words to describe Alaska’s popular ranked choice voting system, “convoluted,” “cockamamie” and “untrustworthy.” Calling democracy unfair – we are hearing a lot of that lately.