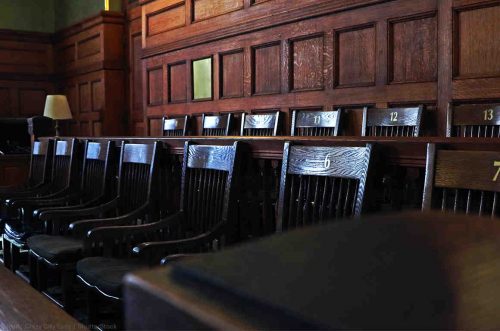 SAN FRANCISCO, CA – A pilot “Be The Jury” program that hikes jury pay from $15 a day to $100 day for low-to moderate-income jurors “helps foster juries that are made up of a balanced cross section of San Francisco residents (and) shows success in increasing economic and racial diversity of jury pools in San Francisco,” according to a six-month report issued Wednesday by the San Francisco Office of the Treasurer & Tax Collector.

“The initial findings of the ‘Be The Jury’ Pilot Program point us in the direction of a concrete, attainable reform that will move us closer to juries that are representative of our diverse communities,” said Elisabeth Semel, Chancellor’s Clinical Professor of Law and Co-Director, Death Penalty Clinic, University of California, Berkeley, School of Law.

Semel added, “We must eradicate the causes of unrepresentative juries at each stage of jury composition—from the source lists that disproportionately exclude people of color to the processes that facilitate discrimination in the selection of the seated jury. Ever-growing income inequality exacerbates the egregiously inadequate compensation for this vital civic service and contributes significantly to the exclusion of people of color from jury venires.”

“For obvious reasons, the greatest obstacle to fair, diverse, and representative juries is economic hardship. At California’s statewide rate of $15 per day, jury service is largely limited to those who can afford to serve without pay or who work for the ever-shrinking number of employers who do pay during jury service,” noted Lois Heaney, President, NJP Litigation Consulting (formerly known as The National Jury Project).

Heaney argued, “For people who need a paycheck to cover food, housing, childcare, utilities, and life’s other expenses, unpaid jury service is an impossible burden to shoulder. The result is juries that do not represent the community. The ‘Be The Jury’ Pilot Program has proven to work, greatly increasing the number of low- and moderate-income jurors, and most especially people of color.”

“The vast majority of ‘Be The Jury’ participants (81 percent) state that they could not have served without the $100 per day stipend. Program participants reflect the racial demographics of the broader San Francisco population. Sixty-three percent of participants self-identified as people of color,” the report noted.

The report also detailed, “Feedback from program participants has been overwhelmingly positive. Participants report having learned about the importance of jury service and encourage the continuation of the program to support other jurors. Ninety-five percent of participants completed a voluntary survey.”

The report said that program participants have a household income of just under $40,000, on average. The area median income in San Francisco for a single household is $97,000.

“In our country’s history, laws barred certain communities from serving on juries. ‘Be The Jury’ is groundbreaking because even when those discriminatory laws changed, low-income jurors—many being Black, Asian, Latino—struggled to be able to serve because they couldn’t give up their wages,” said San Francisco Mayor London Breed. “’Be The Jury’ is the kind of smart, innovative change that will create a more equitable and fair criminal justice system.”

Starting in March, juror pay was hiked from $15 per day to $100 per day for moderate income people called to criminal juries but claim they can’t serve because of a financial hardship. The program is backed by the SF Public Defender Office, District Attorney Office, SF Superior Court and Bar Association.

The report notes, “Jury duty is perhaps the most meaningful opportunity for true civic engagement that our system provides. However, due to financial constraints, many prospective jurors, often those from the neighborhoods most impacted by the criminal legal system, are deprived of this opportunity for engagement due to economic hardship. In San Francisco, a survey found that 35 percent of jurors report that jury service imposed a financial hardship.”

The “Be The Jury” project is “doing exactly what we predicted and hoped it would do, which is empower community members from diverse backgrounds to participate in jury service,” said San Francisco Public Defender Mano Raju. “This pilot program has shown that with increased compensation, we can engage many more people who otherwise could not afford to take the time to serve on a jury to carry out this crucial civic right and duty.”

“The preliminary findings of the ‘Be The Jury’ pilot clearly demonstrate that residents want to be active participants in the administration of justice. Our constitutional right to trial by jury hinges on the ability to have juries convened voluntarily that reflect our community’s diversity and values,” said San Francisco District Attorney Brooke Jenkins. “We must do all that we can to empower residents to always answer the call to service and do their part. Eliminating financial barriers to service is a commonsense solution that will improve our criminal justice system.”

The “Be The Jury” Pilot program was authorized by Assembly Bill 1452 (2021), which mandates jurors are eligible if their household income is “less than 80 percent of the Area Median Income ($74,600 for a single person; $106,550 for a household of four) and if they meet one of the following criteria: (1) their employer does not compensate for jury service; (2) their employer does not compensate for the estimated duration of jury service; (3) they are self-employed; or (4) they are unemployed.”

San Francisco Treasurer José Cisneros said, “No one should be priced out of jury service. These results make it clear that the ‘Be The Jury’ program allows residents to serve on a jury without concern about lost wages or ability to pay for child or elder care. This program brings us an important step closer to a more accessible, diverse, and just legal system.”

“The program is off to a promising start, showing increased diversity among jurors. When juries are more reflective of the communities they serve, they spend more time in deliberations and are less likely to presume guilt, which helps defendants get a fair trial. Considering what we see so far, increased jury pay may be worth considering in more jurisdictions,” said Assemblymember Phil Ting (D-San Francisco), author of AB 1452.

“In just six months, San Francisco’s ‘Be The Jury Program’ has proven that fair compensation for jurors creates a more diverse jury pool,” said Senator Scott Wiener (D-San Francisco), co-author of AB 1452. “We need to permanently support a pay increase for disadvantaged jurors, so that San Franciscans from all walks of life are properly represented on juries, not just those who can afford it.”

“’Be The Jury’ is an innovative way to enable all people, regardless of their economic status, to serve on a jury and have their voice heard in the justice system,” said Yolanda Jackson, Executive Director and General Counsel of the Bar Association of San Francisco. “BASF is proud to have supported this effort and hopes that this pilot will serve as a model for criminal and civil juries throughout California.”