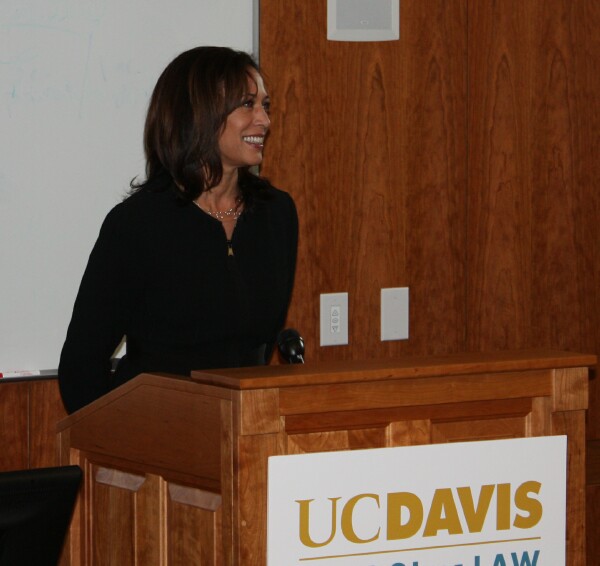 The first time I saw Kamala Harris was in San Jose back in 2008 at the California Democratic Convention.  It was during the heat of the primary battle, and both of the top Democrat contenders sent representatives to speak on their behalf.

Kamala Harris held her own that day and that perhaps helped to propel her into the office she was just elected to by a razor-thin margin (right now) of about 70,000 votes.  Last week, three weeks after the election, Steve Cooley, the LA District Attorney and Republican nominee who declared victory on election night, conceded.

Today, Kamala Harris will declare her victory.  However, as we learned with the election of Barack Obama, change is fleeting.  Kamala Harris has a chance to enact major change, but she will have to better utilize her opportunity than her mentor, the President.

Kamala Harris’ victory gives the Democrats a statewide sweep of elective offices, but if you had to pick a down-ticket race that would have the most impact on state policy, indeed on private lives, it figures to be the Attorney General’s race.

Ms. Harris will do two things immediately that Steve Cooley would not.  First, she will continue the policy that her predecessor began and not defend Proposition 8.  Steve Cooley had vowed full defense of the law that would have banned same-sex marriage.  That would have meant that any challenge to the lower court ruling invalidating Proposition 8 would die for lack of standing.

A Jerry Brown-Kamala Harris Governor and Attorney General combination will continue the policies on this established by Arnold Schwarzenegger and Jerry Brown.  By that fact alone, the Attorney General’s race was crucial in whether Proposition 8 would be upheld.  As of now, that is in serious doubt.

The second area of immediate impact is that Steve Cooley would have joined other AG’s in suing the federal government over health care reform.  Kamala Harris has vowed not to, which will deal a blow to that effort as well.

This is not a completely clean victory from the standpoint of judicial reform.  Kamala Harris has her own skeletons, particularly in the form of failures to disclose exculpatory evidence and problems with the San Francisco Crime Lab.

However, there is also some hope.  From our standpoint, the biggest impacts in policy could come in the form of prison reform.

The Sacramento Bee has an outstanding editorial on ways that Kamala Harris could help ease prison crowding.

They report that today the US Supreme Court will hear arguments that challenge a federal court order that would force California to reduce its prison population substantially.  The original ruling argued that overcrowding has led to problems with health care and mental health care that violate the Eight Amendment ban on cruel and unusual punishment.

Writes the Bee editorial, “Harris, the San Francisco district  attorney, mostly soft-pedaled the issue of prison crowding during her campaign, and until she takes office, she will be in no position to alter the way the state has pursued the case.”

However, the Bee also cites her book, in which she decries the soaring prison population and cost, especially with regards to nonviolent offenders.

They cite a key passage from that book, “For several decades, the passage of tough laws and long sentences has created an illusion in the public’s mind that public safety is best served when we treat all offenders pretty much the same way: arrest, convict, imprison, parole. …

“What the numbers say loud and clear, however, is that most nonviolent offenders are learning the wrong lesson … are becoming better and more hardened criminals during their prison stays.”

Likewise, her work on recidivism is a welcome change.  She helped establish a program called Back on Track that works to move nonviolent criminals away from prison and jail and toward “job training, community service, drug treatment and school.”

Right now, 70% of offenders go back into prisons within three years of release.  That is an extremely costly process, and she estimated that her program can save $1 million in jail costs for every 100 offenders who go through the Back on Track program.

Can it be implemented statewide?  Will she push for programs like these when she is in office?  Those are key questions that face Ms. Harris but there is little doubt that she has the opportunity to help enact much-needed changes.  The question is really whether she has the fortitude to see them through.

Share:
Previous : Guest Commentary: Our Romantic Night in ER
Next : Commentary: Reiterating the Call For A Fair Hearing For the Coach

2 thoughts on “Commentary: Attorney General-Elect Kamala Harris Has a Chance to Make Huge Changes to State”