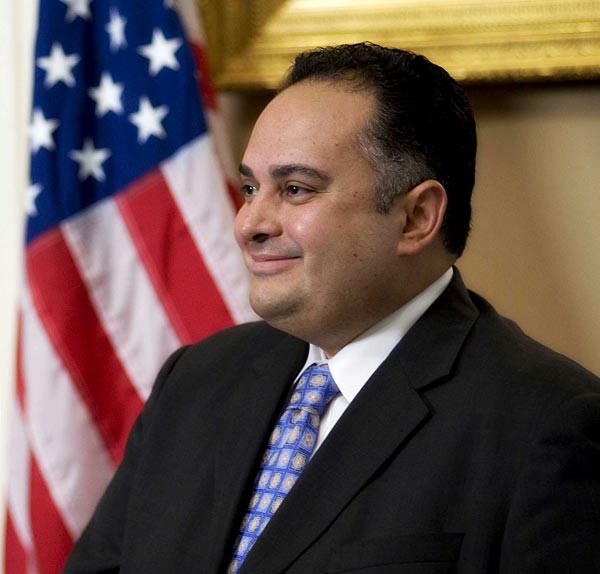 Two of the major planks of the unrest generated by the Occupy Movement have been foreclosures and rising college costs.  Earlier this week, Attorney General Kamala Harris announced a huge settlement that promises to provide relief to people who have been caught in the mortgage foreclosure crisis.  Just as bold is a plan unveiled on Wednesday by Speaker John Pérez to cut college fees by two-thirds for middle class Californians.

However, the plan would rely on funding from the closure of a tax loophole that benefits out-of-state corporations, something that would require a two-thirds vote and something that Republicans, at least at the outset, seem reluctant to do.

“The pressures of the recession and massive fee increases have eroded, or even ended, the dream of higher education for too many California families,” Speaker Pérez said. “Now it is time for our state to reinvest in our system of higher education. The California Middle Class Scholarship does that by closing a loophole for out-of-state corporations and slashing fees by two-thirds for thousands of California students.”

The Speaker’s plan has gained the support of UC President Mark Yudof, who said on Wednesday, “Like Assembly Speaker Pérez, we are deeply concerned about ensuring affordability for middle-class students who don’t qualify for financial aid. That said, the University of California has made it a priority to make a high-quality education accessible to a wide range of students from families with low or moderate income. Roughly half of UC students pay no tuition because of robust financial aid reinforced by an ongoing institutional commitment.”

“As we work with the governor and legislators on fiscal and policy issues that would affect the affordability of a UC education, we welcome constructive efforts such as the speaker’s proposal to provide middle-class tuition relief,” President Yudof added.

The website will also provide a way for students and their families to share their stories about their difficulties in paying for college.

“Most middle income families are forced to use student loans to cover the thousands of dollars in fee hikes. Students who finish their education leave school further in debt, and end up sending monthly payments to out of state banks rather than contributing to the local economy,” the speaker’s website reads.

“Even worse, some students cannot afford to pay for college, and give up on the promise of higher education, about the most damaging thing possible for the long-term health of the economy,” it adds.  “But there is another way. The Middle Class Scholarship Plan, the Assembly’s proposed program to keep college costs way down for middle income families, will ensure that students, graduates and families can keep more of their hard-earned cash and stay out of debt.”

“The California Middle Class Scholarship Act is very simple. Too many families are getting squeezed out of higher education. For students whose families make $150,000 a year or less, too much to qualify for our current financial aid system, but not enough to be able to write a check for the cost of education without feeling that pinch, the Middle Class Scholarship Act reduces fees at the UC system and at the CSU system by two-thirds, giving tremendous assistance to those families to make college affordable again,” the speaker said in his radio address this week.

“The Middle Class Scholarship Act will save students at the CSU system $4,000 a year or roughly $16,000 over the course of their time at the CSU system. In the UC system, it’ll save students and their families $8,200 a year, roughly $33,000 over the course of their time in school,” he added.  “Additionally, for students in the community college system, we’ve set aside $150 million dollars to make community colleges more affordable throughout the state as well. Since 2003-2004, the cost of going to UC and CSU has increased tremendously.

“At the CSU system, we’ve increased fees since 2003-2004 by 191 percent; at the UC system, by 145 percent. We pay for the Middle Class Scholarship Act by closing a loophole that only benefits big, out-of-state corporations.”

The cost of this dramatic reduction in higher education fees will be paid for by closing the Single Sales Factor loophole, a tax break that only benefits big out-of-state corporations. Ending this giveaway to out-of-state corporations – which had bipartisan support in the Assembly last year – will bring in more than $1 billion for the Middle Class Scholarship.

“California is on the mend,” Speaker Pérez said. “And one of the best ways we can help that continue is enacting the Middle Class Scholarship and helping reclaim the promise of higher education as an economic engine for our state.”

However, the changes to the tax structure would require a two-thirds vote of the legislature in order to pass.

Speaker Pérez, during the announcement of his plan, said that despite previous Republicans reluctance to change the tax, he believes that Republicans can be persuaded to support the plan.

He noted that two Republicans in the Assembly had voted for the governor’s tax proposal last year and argued, “We think it is such a good, straightforward approach that it should receive popular support in the Senate as well.”

Senate Republicans said on Wednesday that they had not been briefed on the speaker’s plan.  Moreover, they argued they did not foresee approving this change in the tax code, as it was a hard-fought concession that they had earned in negotiations.

“Why would we Republicans want to unwind deals that we helped negotiate when we were the minority party? The majority party is always unwinding deals with us, so we’re not anxious to go down that road, just on principle, forget the policy, whether it has merit or not,” said Senate Republican leader Bob Huff.

Republicans consider the change to be a tax increase, and therefore Senator Huff called it a “nonstarter.”

Students however, not surprisingly, have come out strongly in favor of the plan.

Claudia Magaña, President of the University of California Student Association & University of California, Santa Cruz student said, “Speaker Pérez’ proposal shows that student concerns are finally being heard. This proposal would bring much needed relief to middle class families that have been hit the hardest by back-to-back fee increases. This bill would be a huge step towards realizing the California Master Plan for Education and would greatly increase the accessibility and affordability of higher education for all Californians.”

Joelle Gamble, UCLA Undergraduate Student Association Vice President of External Affairs and UCLA student said, “UC students that receive financial aid, like myself, are in desperate need of further assistance. With the rising cost of tuition, fees, housing and books, this proposal will make college an attainable goal for thousands of students that would not have been able to achieve it otherwise.”

Greg Washington, President of the California State Student Association & California State University, Fullerton student added, “For over ten years, California’s middle class has struggled to keep up with student fee increases that result from repeated state budget reductions to the CSU. Speaker Pérez has offered a promising solution to this problem, and we look forward to working with him to understand its full impact and how it can benefit students.”

Rich Copenhagen, Student Trustee of the Peralta Community College District & College of Alameda student said, “Speaker Pérez’ Middle Class Scholarship shines a light in the dark as our students are fighting an up-hill battle against worsening economic and social conditions to gain an education. The re-focusing of legislation by Speaker Pérez to the equalization of opportunity is a monumental effort to building the pathways we need to educate our state; all the way from inspiring a sense of opportunity and possibility in our youth to providing those opportunities to students coming out of high school or the work force seeking advanced degrees. I could not think of a more effective avenue to boosting the long-term stability and infrastructure of California.

“For over ten years, California’s middle class has struggled to keep up with student fee increases that result from repeated state budget reductions to the CSU. Speaker Pérez has offered a promising solution to this problem, and we look forward to working with him to understand its full impact and how it can benefit students,” continued Greg Washington of California State University, Fullerton.

“We commend Speaker Pérez on this innovative bill that invests in the accessibility and equity in our community college system! Strategically, this bill gives local control to districts to address community-specific issues. It will encourage our districts to connect with their communities on a deeper level to address obstacles preventing students from pursuing and continuing a higher education,” added Emily Kinner, President of the California Community College Association of Student Trustees and De Anza College student.

“California’s public colleges and universities have been one of our most prestigious institutions, and, unfortunately, because of the collapse of the economy, we’ve moved away from fully investing in those universities and colleges. The Middle Class Scholarship Act intends to turn that around,” the speaker added.

Share:
Previous : Governor Pushes for Tax Plan to Save Schools and Invest in Infrastructure
Next : CITY SEEKS NOMINATIONS FOR 2012 THONG HY HUYNH AWARDS