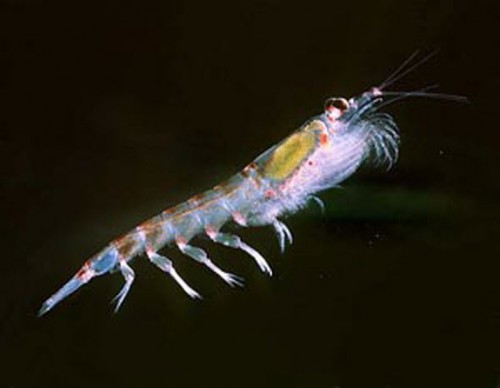 Krill is said to be the largest biomass on the planet, outweighing the human population of the world. Yet in size it is tiny, relative in size to a paper clip, measuring on average about two inches in length. These small, shrimp-like crustaceans run the Earth’s marine ecosystem and, surprisingly, are instrumental in sinking carbon into the ocean. Yet, alarmingly, there has been an 80% decline in krill populations over the last 30 years. These declines are due in part to the ice cover loss in the Antarctic, caused by human induced global warming. This ice cover loss removes a primary source of food for the krill: ice-algae. The little pink, opaque creatures are starting to appear as the ubiquitous “canary in the coal mine.” Simply put, without krill, most of the life forms in the Antarctic would disappear.

Antarctic krill are known as among the largest of the eighty-five known krill species. Their estimated numbers range from 125 million tons to 6 billion tons in the waters around Antarctica. During certain times of the year, krill congregate in swarms so dense and widespread that they can be seen from space. Their longevity, of up to ten years, is astounding for such a small creature. Heavily hunted, they spend their days avoiding predators by diving deep into the cold depths of the Antarctic Ocean, one hundred meters below the surface, and at night they will swim up toward the surface in search of food. It is the up and down, surface to the deep, movements that allow the krill to capture carbon. As they rise, the carbon is captured and then as they dive and excrete their waste, they deposit the carbon into the ocean depths. Because they do this maneuver many times every night they are instrumental in pulling carbon from the atmosphere at an amount equivalent to the annual emissions of 35 million cars – and this makes these tiny animals much more important than originally thought.

The global human food chain has been farming these tiny creatures for decades. Humans harvest an estimated 150,000 – 200,000 tonnes annually. Used in everything from farmed fish food – that humans then eat – to dog food, and fish oil capsules for humans, these small, shrimp-like crustaceans are essentially the fuel that runs the engine of the Earth’s marine ecosystems. Krill feed on phytoplankton: microscopic, single-celled plants that live off carbon dioxide and the sun’s rays that drift near the ocean’s surface. The krill, in turn, are the main staple in the diets of literally hundreds of different animals; the 200-ton blue whale eats up to 4 tons of krill a day, and numerous fish species, seabirds and penguins, as well as seals, also survive on this tiny creature.

Every year the ice in the Antarctic region is freezing later and melting earlier, essentially creating a winter that is 90 days shorter than normal. Imagine winter in the United States being 90 days shorter than normal. This type of change would drastically affect food production. This is what scientists think is crashing the krill population. As the sea ice melts and the winter shortens, the krill’s life cycle is affected. One leading theory says the krill’s life cycle is driven by an internal body clock that responds to the summer melt and winter growth of the arctic ice pack. Through recent study and observation, scientists discovered that the loss of the ice extant correlates with the density of the krill. As climate change alters this timing of the ice pack, the krill’s life cycle is disrupted, causing them to vanish. It has become obvious that winter sea ice season is crucial for the krill’s survival when the phytoplankton food supply isn’t blooming.

Despite this knowledge, krill harvesting is continuing a common trend in the fishing industry: fishing further from home and further down the food chain until the species are gone. The Antarctic is about as far away from home as anyone can get, and the krill are down at the bottom of a crucial food web. Without climate change mitigation and real control of the fisheries, the end is near.

47 thoughts on “The Shrinking Life of Krill”