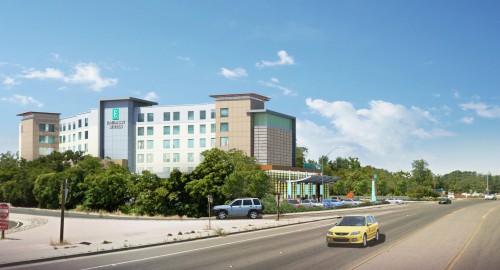 For some reason, there wasn’t as much attention given to the fact that, before the council even acted on the Hyatt House, a neighbor, represented by local attorney Don Mooney, had filed a CEQA lawsuit.

There has been a lot of talk about planning by exception, but this is planning by litigation.  And I would argue it is not particularly healthy for our community.  A public records request filed in early September revealed that four lawsuits filed by Michael Harrington, a former councilmember, had cost the city half a million dollars.

Mr. Harrington would offer in his defense that there were flaws in the four projects he sued and that the result of his suits would result in better projects.  And clearly, Mr. Harrington has a point here, particularly with regard to his efforts that led to the water project being rescinded in the fall of 2011 when he and a group of volunteers got sufficient signatures to put the measure on the ballot.

The initial water project was rushed, there was no rate study, and it was overly expensive and over-sized.  The city learned from their mistakes and had a group of citizens study the need for the project – they came up with a much better scaled-down project, greatly reduced in cost, and put it on the ballot.  While Mr. Harrington and others would still oppose the water project, it narrowly passed, and he takes credit for the result of a better project.

Going forward, my biggest concern is process.  The Hotel Conference Center is bogged down in litigation.  While the cost of that litigation to the city will be reimbursed by the developer, what the city has not calculated is the loss of revenue in the form of TOT (Transient Occupancy Tax) resulting from the litigation.  Moreover, the litigation expenses to the applicant figure to raise the cost of development in Davis.

The city is not blameless here.  They resisted doing an EIR which would have better shielded them from litigation – even over the objections of the applicant.  On the other hand, while we can quibble on the traffic report, the bottom line is, given that the traffic flow in and out of the hotel is not going to be a steady stream, the impacts on Richards of just the hotel would be minimal.

The issue becomes a bit more egregious when we are looking at the continuation of a lawsuit against Nishi – which the voters ended up voting down.  How absurd that a defeated project has a continuing lawsuit.

From our standpoint, litigation against every project is in the long run self-defeating for a number of reasons.

First, for the most part, these projects are not going to be stopped by litigation.  If the goal of the litigators is to stop projects, the best idea is to put forward candidates who favor slower growth policies, get a council majority and allow democracy to work properly.

Second, if the argument is that these lawsuits will produce better projects – first of all, that is subjective.  But second, by raising the costs to develop in Davis, it may end up that developers cannot deliver all of the added amenities that the community might want.

Third, by cutting off or reducing city revenue, it may well incentivize the city to do more projects rather than less.

However, something changed.  First, the Embassy Suites project remains tied up in litigation.  Second, the defeat of Nishi has led to new investment in the Cowell-Richards corridor.  Sierra Energy and Fulcrum Property are both putting millions into expanding research park facilities.

Would that have happened had Nishi not be defeated?  The defeat of Nishi meant that 300,000 square feet of R&D space did not go online.  Sierra Energy had an agreement to help develop that space, they clearly simply moved their plans to existing facilities.  Would Mark Friedman have purchased Interland for $70 million with the clear incentive to redevelop and densify the property had Nishi passed?  It’s an open question.

But there is no doubt that the close proximity of the University Research Park played a role in reopening the door for the Hyatt House.

So yes, it is entirely possible that litigation tying up the Embassy Suites, coupled with the defeat of Nishi, opened the door to the Hyatt House, to which the council may not have been as open had other projects not been thwarted.

Land use policies are a series of trade-offs.  This is something that we should think long and hard about as other projects move forward.

As our commentary on Thursday and Dan Carson’s analysis on Friday demonstrate – the city faces a revenue crisis.

I’m frustrated,” he said.  “We set as a number one goal as a city council not a month ago, fiscal resilience.”

“People have said to me what you’re engaged in around the fiscal issue, especially in relation to this project, is fear mongering,” he stated.  He said that fear mongering is raising fear that isn’t merited.  “The reality is our fiscal situation is dire and it’s not getting any better.”

“In that context, is it too much for me to ask a neighborhood, many neighborhoods in our entire city, to make sacrifices?  I don’t think so,” he stated.  “We’re in a situation where we have to try to find more revenue for the city.  I am unapologetic in trying to find ways to find revenue.  And I’m unapologetic in trying to find ways to cut costs.”

But it goes further than just the opposition to the hotel.  It goes to the difficulty in getting projects passed in Davis that can generate revenue.  And, while I share the desire of most in this community to preserve farmland and our unique character of our town – I have been warning people that right now this community is not sustainable and that the price of preserving our community threatens, ironically, to harm our community.

43 thoughts on “My View: We Need to Stop Planning by Litigation”