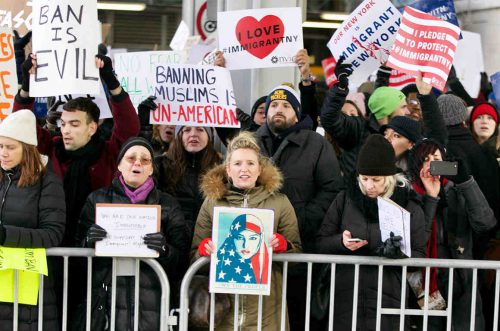 Yesterday the Fourth Circuit Court of Appeals in Richmond, Virginia, upheld an injunction on President Trump’s travel ban, saying the executive order “speaks with vague words of national security, but in context drips with religious intolerance, animus and discrimination.”

Chief Judge Roger Gregory writes, “Surely the Establishment Clause of the First Amendment yet stands as an untiring sentinel for the protection of one of our most cherished founding principles—that government shall not establish any religious orthodoxy, or favor or disfavor one religion over another.”

He adds, “Congress granted the President broad power to deny entry to aliens, but that power is not absolute. It cannot go unchecked when, as here, the President wields it through an executive edict that stands to cause irreparable harm to individuals across this nation.”

Last month, California Attorney General Xavier Becerra joined a coalition of 17 states filing an amicus brief urging the Fourth Circuit Court of Appeals to uphold the district court ruling that blocked the travel ban on constitutional grounds. The states’ brief explains the reasons that the district court’s decision should not be overturned on appeal, including the overwhelming and unrebutted evidence of anti-Muslim animus, the lack of a genuine national security rationale, and the significant harms that the ban would cause the states, their residents, and their institutions.

“The Fourth Circuit has confirmed what we already know: Donald Trump’s travel ban is anti-Muslim, un-American, and unconstitutional. We should protect our national security based on real threats, not on fear mongering and hate. We should continue to welcome people of all faiths and ethnicities to experience the greatness of America – to study at our universities, to contribute to cutting edge research, and to explore our national treasures.

“This Administration already has suffered a string of well-deserved defeats in the courts. President Trump should read the Constitution. I will continue to fight discrimination and overreach every step of the way.”

We should all feel proud today. The Fourth Circuit Court of Appeals refused to allow the Muslim ban to go into effect. Step by step, point by point, the court laid out what has been clear from the start: The president promised to ban Muslims from the United States, and his executive orders are an attempt to do just that.

The bottom-line question, the court recognized, is whether the Constitution establishes the rules for everyone, “rulers and people,” police officers and presidents, “equally in war and in peace.” And the court answered resoundingly that it does. The government, the court explained, had repeatedly asked the court “to ignore evidence, circumscribe our own review, and blindly defer to executive action.” But the court refused: “We cannot shut our eyes to such evidence when it stares us in the face.”

And that evidence is clear and compelling.

While the text of the Muslim ban “speaks with vague words of national security,” the court recognized that in context it “drips with religious intolerance, animus, and discrimination.” The ban’s message of religious condemnation is contrary to the bedrock constitutional requirement that the government remain neutral among religions: “When the government chooses sides on religious issues, the inevitable result is hatred, disrespect and even contempt towards those who fall on the wrong side of the line.”

The framers of the Constitution recognized how dangerous taking sides would be for our country, and the Fourth Circuit today vindicated this fundamental principle.

One of the members of the court, Judge Wynn, pointed out the historical context. “We have matured from the lessons learned by past experiences documented, for example, in Dred Scott and Korematsu,” he explained, referring to the shameful decisions permitting slavery and Japanese internment. “Laid bare,” Judge Wynn explained, “this Executive Order is no more than what the President promised before and after his election: naked invidious discrimination against Muslims.”

And that is unconstitutional.

These cases are not over. The Ninth Circuit recently heard arguments in another challenge to the Muslim ban, and a decision is expected soon. And the government may appeal to the Supreme Court. But today is an enormous victory for American values, one we should all cherish.