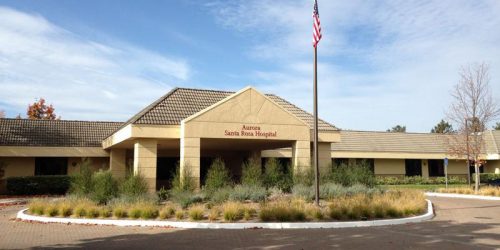 On Friday as the world was about to enter the New Year’s Day three-day weekend, just after 5 pm the Vanguard received a frantic call from Kristin, the mother of an 18-year-old Davis High School student.  Her daughter had experienced a mental health breakdown and was taken to the Aurora treatment center in Santa Rosa just after Christmas.

Kristin, her husband James and daughter Elizabeth had just come out of a two-hour meeting with Dr. Ruth Raykonti at Aurora Santa Rosa Hospital.  Because the family deemed Elizabeth to be a danger to herself and others, Kristin stated she felt uncomfortable bringing her back into their home. Thus, Aurora Santa Rosa Hospital was making plans to release her daughter, not to the home, but rather to the Fourth & Hope emergency shelter and treatment center in Woodland.

Kristin, meeting with the Vanguard late last week, described how Dr. Raykonti’s assistant literally printed off the page from the Yolo County website on homeless shelters and handed it to them.

Dr. Raykonti, according to Elizabeth, explained that “if I couldn’t go home, there weren’t many other options.”

As if turning an 18-year-old mentally ill patient over to a homeless shelter was not bad enough, Aurora failed to check with Fourth & Hope.

“We left the meeting, and (Kristin) went out to the car and she started making phone calls,” James explained.

Kristin, after making quick calls, soon found out that the homeless shelter would not take a high school student, even one who was over 18.  Not only that, but they do not process intakes on a

“I called Fourth & Hope and they said they didn’t take intakes on Saturdays,” Kristin explained.  “So they wouldn’t take her in, even if the hospital brought her there.”

She was also told, “(Elizabeth) was too young, and even if she was 18, they don’t take high school students.”

As a result, Aurora, according to the family, would simply give Elizabeth a bus ticket, send her back to Yolo County by herself and turn her literally out on the streets.

When Kristin attempted to contact Aurora about this problem, she was unable to get ahold of anyone and Dr. Raykonti never returned her message.

She added, “That’s effectively just dropping her to the street in front of the homeless shelter and letting her fend for herself.”

“They said, this is the law and here is where you are going to go,” James said.  “That’s when they brought out the printout and said, here you go.”

Fortunately for Elizabeth, Yolo County stepped up.  Some quick calls to June Forbes of NAMI (National Alliance on Mental Illness) and the Vanguard got the attention of Supervisor Matt Rexroad and Public Guardian Karen Larsen.  Quickly, Yolo County stepped up for a patient who was not even theirs and got Elizabeth a spot at Safe Harbor Crisis House in Woodland, where she was on Friday when the Vanguard met her for the first time.

Elizabeth, whose name has been altered to protect her privacy, is, as stated above, currently a student at Davis High School.  She has an IEP (Individualized Education Program) and a long history of mental illness. She was first hospitalized back in 2012 for MDD (major depressive disorder) and suicidal ideation.  Since then, she has been hospitalized four more times for similar reasons.

The immediate event that led to her latest hospitalization is shrouded in some mystery.  Around 4 am on December 26, Kristin called the Davis Police regarding Elizabeth’s erratic behavior and threats against herself and the family.  She was evaluated and transported to Sutter Davis Hospital, which managed to find her a bed in Aurora.

An incident had occurred on Christmas evening.  Elizabeth was at a friend’s house with her friend, friend’s sister, friend’s mother and friend’s mother’s boyfriend.  Kristin had been unable to reach Elizabeth until 12:30 am, when Elizabeth answered the phone crying and yelling.

When Kristin arrived at the friend’s house, she observed the friend’s sister being removed from the home by paramedics after being stabbed.

Elizabeth told them that her friend had a knife and had stabbed her sister.  Elizabeth was covered in blood.

The Vanguard spoke to Davis Police Lt. Paul Doroshov, who confirmed there was a stabbing that evening that matched the description provided.  However, because it was an ongoing investigation he was not able to offer any details.  He did say that there has not been an arrest made and the investigation is continuing.

From there, things went downhill for Elizabeth.  Her mother tried to find out what had happened, but she said Elizabeth grew more agitated.  She would not tell her mother whether drugs or drinking had been involved in the evening.

The situation escalated when Elizabeth began to yell, break things, shove family members and kick a bedroom door. Elizabeth threatened suicide and escalated the threats.  At this point, the police were called, and she was taken to Sutter Davis.

The Vanguard made several attempts to contact Aurora Santa Rosa Hospital to understand just what their policy is.  When the Vanguard first spoke to someone in the business department and described the situation, they were stunned and said that this wasn’t their policy.

The Vanguard had made multiple attempts to speak to either the Chief Executive Officer or someone authorized to speak to the media, but was never allowed to do so.

Finally, two days later, the same individual informed the Vanguard that under privacy laws, they would not be able to give any facts.

“It sounds like you don’t even have a story,” she said.  “I know that the parents might have gotten a sympathetic ear with the facts that they are speaking about.  However, this is an adult and your information is coming from the parents of an adult.

“We’re just not trying to hide anything,” she said.  “There’s just nothing to defend at this point.”

While Aurora was willing to drop the 18-year-old at a homeless shelter in Woodland over New Year’s Day weekend, Yolo County was able to get Elizabeth into Safe Harbor within about 30 minutes of getting in touch with Karen Larsen.

In fact, someone from Safe Harbor personally went to pick her up and drive her to Safe Harbor.

“We understand that’s not normal,” James explained.  But the alternative was that Aurora would give her a bus ticket to Yolo County and put her on a bus.

However, in a text exchange with Kristin, she said, “Aurora can be difficult to work with.  It’s our hospital of last resort.”

June Forbes of NAMI-Yolo believes that the start of the problem here was a shortage of local beds, requiring Elizabeth to be placed out of county in Santa Rosa “where staff doesn’t have as thorough a knowledge of after-care options in her own county so the after-care option they chose is not in reality available.”

The second problem, she said, “[i]s (that) conservatorship doesn’t seem to have really been considered as an option for this vulnerable young woman.”

On the other hand, she said, “[w]hat went right is that the public health system in Yolo County even though this girl was not their patient, jumped on it and found (something) appropriate for her at the last minute on a holiday weekend.”

“I think we ought to crow about that,” she said.  “Not often am I willing to crow and applaud about the public mental health system, but that time, yay.”

When the Vanguard met with the family at Safe Harbor on Friday, Kristin discussed some of the program options that Elizabeth now will have access to, thanks to the work of Safe Harbor.

They still have a lot of long term concerns about Elizabeth, but at least they feel right now that they are headed in the right direction.