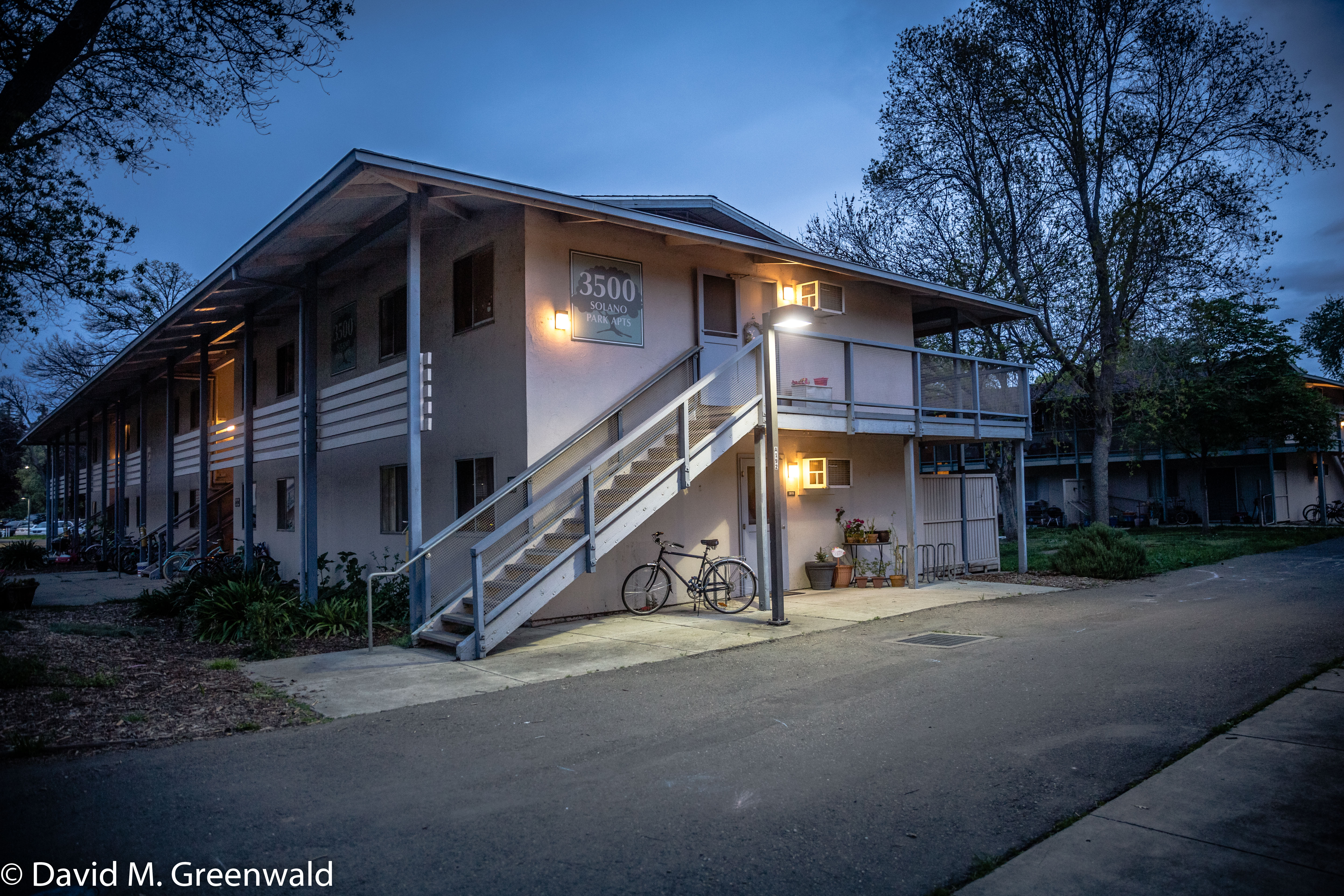 The discussion over student housing has largely focused on undergraduate students.  While their numbers dictate attention, university policies actually put graduate students in more jeopardy – especially when they have families.

On Friday, the Vanguard met with one such family whose rather unique circumstances illustrate a number of problems.  They have asked not to have their names published as they fear their situation with the university might be tenuous.

The first thing I noticed as I met with the couple is that they came with four small kids in tow, ages ranging from five to about 18 months and there is another one on the way.

The husband, a graduate student, told the Vanguard that they don’t live on campus anymore.  This arrangement was not by choice and they “miss what it was.”

He described that life at Solano Park was fairly good – it was a good and safe community.  However, it was a community under stress as it faces being shut down at some point by the university.  Already, Orchard Park has closed down.

While he described Solano Park as “family student housing,” Orchard Park’s closure “introduced the frat guy type.”  He said that of the 300 or so apartments at Solano Park, only 100 were actually families.

“We had a two bedroom apartment,” he said.  “Rent was $906 a month which was barely affordable.”

Graduate students get about $2000 per month and, at the rate of $906, half of it goes to rent.  The university actually limits how much a graduate student can make.  The maximum is $3500 – that

includes both on-campus and off-campus working.

So unless people want to go into student debt, they have no capacity to make more money.

When we covered the bargaining negotiations last month, Ellie White told the Vanguard that “C graduate academic student employees are paid $3,865 per year less than the living wage reported by Yolo County. This severely limits the options of affordable housing available to student.”

She is worried that when Solano Park closes in 2020, there are no other affordable housing options on campus.

Caroline McKusick noted that a university committee “concluded that monthly rent at the new Orchard Park should be only 33% of a TA [teaching assistant] salary,” but the university ignored that recommendation.

As a result, families like the one we interviewed were paying half their salary for rent.  And as we will see, that is better than the alternatives for them.

Their story takes a bizarre turn in October 2016.  Part of the issue is that they lived in a two-bedroom apartment.  That meant according to regulations they could have two people per room and one for the house, for a total of five.  But the birth of their fourth child pushed the number to six.

Never mind that a baby is not even mobile or that they effectively have four very small children.

“They allowed five people, but we had six people,” he said.  He explained that in discussions they described fire “guidelines” and other codes, none of which seemed like mandates to him.

He explained that right after the birth of their child, they got a letter from the university dated three days before his birth, stating that they were in violation of the lease with six people and wouldn’t be allowed to renew.

They attempted to appeal to student housing.  One thought that he had is that they could simply rent two one-bedroom apartments instead of one-two bedroom apartments.  Each of the one bedrooms could allow for three people and the math would work.  But the university would not budge.

They met with the woman from student housing.  She came over to their house to meet with them.  The family described her as very condescending.

They were told that they were “purely not able to stay because of our family size.”  He said, “She had absolutely zero compassion.”  She told them, “There’s no policy for this, we don’t want to set precedent (by granting an exception).”

But, as he pointed out, there wasn’t much danger of that.  In general, graduate students don’t have families with children.  When they do, they don’t generally need three-bedroom apartments, which is why the university doesn’t provide them.

In a bizarre twist he asked about the option of having fewer people live at the apartment.  “What paperwork is needed?”

He explained to the Vanguard that a neighbor offered to put one of their kids on their lease to make it work.

But what the university’s Residential Services Assistant Manager said next was so bizarre, we asked to see a copy of the email to verify the story.

They were told that “if you decide to give legal guardianship of one of your children to your family, then we would need a notarized, legal document that demonstrates the guardianship. I am not guaranteeing a renewal if you provide this documentation. Our office would still need to review the documentation to grant an exception. I would also remind you that if it is perceived that this child is not living with your family and is in fact living with you at Solano Park, you would be in violation of your lease and University policy.”

In other words he said, “We could stay if we give up legal guardianship of our child and give them up.

“At this point we realized that the university wasn’t going to budge,” he said.  “By default we had to leave.”

But leaving, as it turned out, meant a host of other challenges.

They were still not making much money and one of the problems is that during the summer, the department where he is a graduate student shuts down and he has no access to summer money at all.

In order to rent in most places you have to pass an income qualification check, a credit check and provide first and last month’s rent.  “We can’t afford any housing with the two times rent requirement,” he said.

“We were going to live out of our van,” he said.  His wife worked at MacDonald’s in order to be able to make rent at Russell Park.  But, by taking the job, it disqualified them from EBT (Electronic Benefits Transfer) benefits.  “Basically we had to choose between housing and food.”  He added, “Section 8 in Davis has been impacted for 11 years.”

By sheer luck, they were able to get into the Russell Park apartment complex.

But there was a cost to that as well.  Their rent went up from $906 to $2100 per month.  That was for a three bedroom.  However, he pointed out that was better than the rest of Davis which was over $3000 per month.

They were still going to have a homeless month because of the timing of when they had to move out of their Solano Park apartment and when they could move into Russell Park.

Russell Park turned out to be not only unaffordable but a disaster.  There were cockroaches everywhere.  Russell Park was next to Orchard Park which had been vacant for several years at that point.  One day they plugged something into a wall outlet and it sparked.

He opened up the outlet expecting to find a loose wire and instead a ton of cockroaches came out of the wall.

They ended up having to knock out three walls to take out the hives of cockroaches.

“It was unsafe for children,” he explained.  “That meant we had to be living somewhere else while they decontaminated the apartment.”

Eventually they decided to move.  But Davis is impacted and expensive.  Anywhere they wanted to move, they had to show they make three times the rent and they don’t qualify.  Plus if you don’t move on the normal cycle, there are no vacancies.

They managed to find a farmhouse outside of Woodland.  They are paying month to month.  Rent is still about $2000, but it’s less than Russell Park, but outside of the affordable range.  They went from a three-bedroom apartment to a four-bedroom house.

The only reason the landlord took them on is that her father signed on, and it was a mom/pop property.  The prior tenants were awful and didn’t take care of the place, so the landlords were happy to take on the young family.

They made an exception so long as her father was on the contract as a guarantor.

“We are so lucky that they said yes,” she said.  “Every place in Woodland turned us down.”

She got a job at Home Depot for 20 hours a week to get by.  They have talked about her moving back to her parents’ and him renting a single bedroom.

“Summers especially – we’re shut down for the summer,” he said.  “It’s a drought for three months.

“We wouldn’t want to go back,” he said, even though they didn’t have to pay for parking or car expenses.  It was a ten-minute bike ride.  He said that “the only advantage is that it was affordable.”  Sort of.