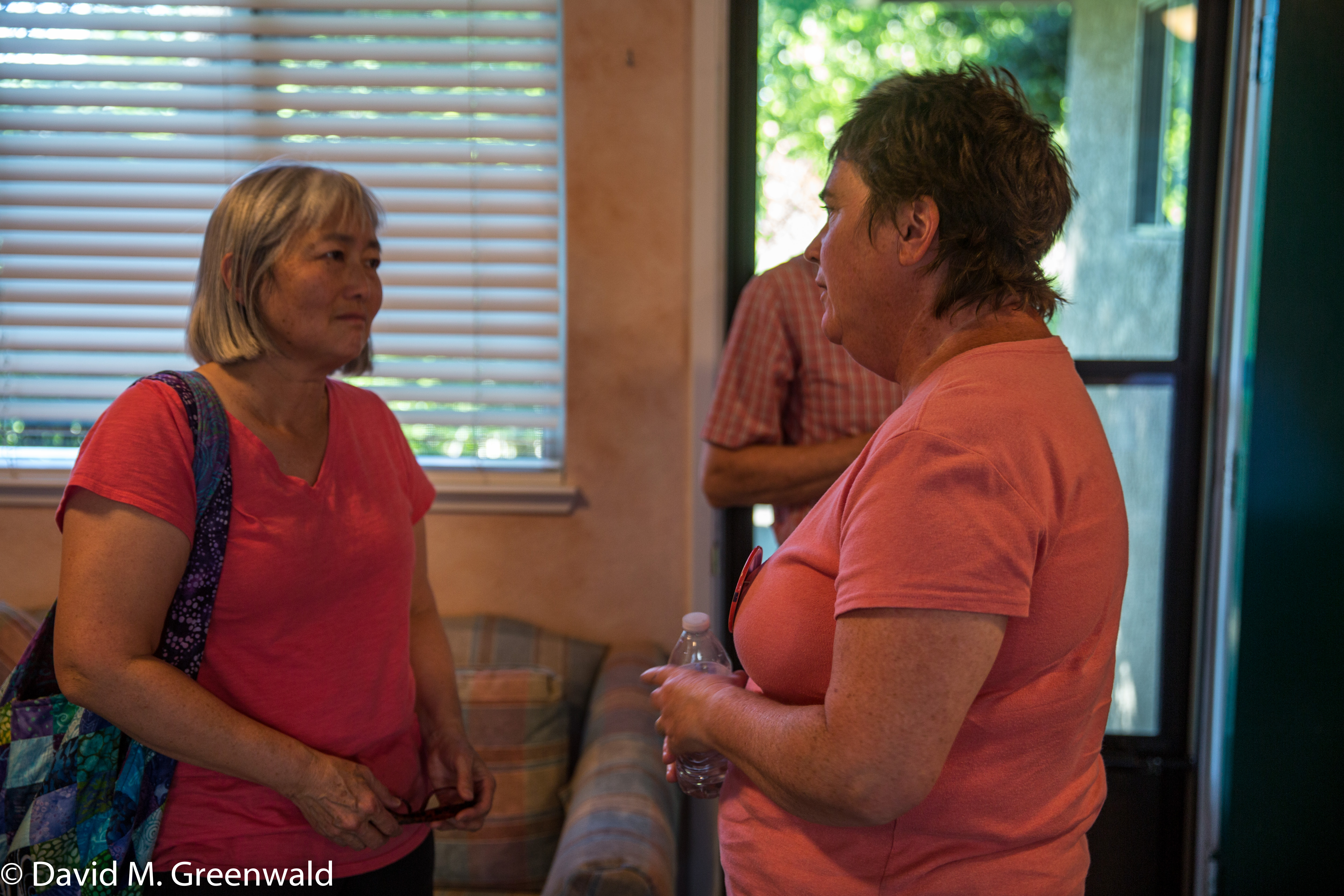 Linda Deos invited the Vanguard to her Meet and Greet at the Olympic Cottages.  It was a small but engaged group of people at the event.  Afterwards, Ms. Deos sat down with the Vanguard to talk about her candidacy and the state of the race.

Ms. Deos described her experience running for council as “positive.”  She said, “It’s been quite a learning experience.”

It has been a lot of work, she said.  “But the part – I have loved going door to door.  I have loved reaching out and talking to people.

“I’m still reaching out and trying to learn as much as I can,” she said.  “I’m not an expert in everything.”

Linda Deos has practiced law for 25 years and owned a small business.  She worked on campaigns, “but always for somebody else or an issue.  I don’t think I realized how different it would be, being the candidate and being the focus of that.  That’s been the transition for me.”

As we were talking – a student came walking through, with a Yes on Measure J shirt walking precincts for the Nishi campaign.

Ms. Deos explained, “I see how important it was for voters to see me, and be able to speak with me.”  She said, “I get a lot of energy from that.  I’m down to about 20 precincts left.”

Linda Deos said, “I’ve learned to be non-judgmental.  I’ve learned not to make assumptions based on stickers and not think that a member of a given party doesn’t want to talk with me.  Everyone who wants to talk – wants to talk.  It’s not related to party at all.”

She said, “I learned how much people care here – people care, they really care.  I think that’s what makes us such a cool town.  People are involved at that level.”

Of over 3000 homes she has walked to, only about three people were rude to her.  She said, “Three people – that’s amazing.”

She described people as kind – offering her drinks, snacks, and bathrooms.  “I think people just want community sometimes,” she said.  “Sometimes I’ve been concerned, I’ve seen a lot of shut-ins.  People who don’t get out and they’re lonely.  They want to talk.  Nobody’s come by to see them.  That makes my heart ache.”

On her campaign flyer, she has a broad and diverse group of supporters.

She explained, “I think it’s because they see I’m earnest, honest, that I care and that I have learned issues, that I am open to listening, and I’m not coming in saying I know what’s best.

“The number one thing I’ve heard from everyone who’s listed on there is ‘you listened to me,’” she added.  “Other folks that come by, they don’t want to listen to me.”

She said, “I think that’s what’s brought this coalition together.”

Earlier in the campaign, she had some missteps on land use and her overall views seem to cross normal dividing lines.

She describes herself as responsible growth or smart growth.  Linda Deos said, “I want to take it project by project and not be somebody who is going to be, anything that is going to be building houses here, I’m for – anything to expand the city, I’m for.  I’m not that person.”

Instead, she said, “I’m going to say, show me the project.  Let’s see if it’s fiscally going to be good for the city.  Is it going to meet the needs of the city?”

She said, “That’s why I’m supportive of J (Nishi) – the current Measure J.  It’s meeting the needs of our community.”

On the other hand, she said, “I’m not 100 percent on board with the active senior development that’s proposed by the hospital.  Things still need to be worked out on that.

“How do I feel about Measure J/R?” she asked.  “I finally was able to talk to one of the attorneys who helped to draft it.  She helped me understand kind of the nexus behind it, what it was about.”

She saw Measure R as a way to bolster the Planning Commission’s review process – that has been a big push of Ms. Deos, getting more involvement in the commissions.  She was told that Measure R was meant to do something else.

“That makes sense,” she explained.  “IF they can’t be in there together, then I’m going to support Measure J/R as it is at this point.”

However, there is a caveat there.  Linda Deos explained, “I don’t know what we’re going to do if Nishi is voted down and this other project is voted down.  I think we have to look at things and everything has to be on the table then.”

She referenced the student forum, “I said ‘we’ have control.  The pronoun, ‘we’ was meant to mean the citizens of the city and not we the city council.  I know that was misinterpreted or I wasn’t clear.”