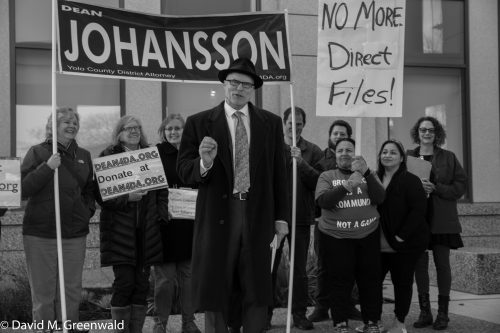 Supervisor Saylor said, “Mr. Johansson has raised critically important issues about criminal justice policy. Yolo County incarceration rates, charging practices, and incidence of jury trials all stand out among the highest in California. We can change this. A vote for Dean is a vote for smart on crime reforms aligned with the values of Yolo voters.

“I am impressed by his commitment to creating needed change in our local justice system through appropriate charging and focus on community. He has a wide breadth of legal experience, as a prosecutor, private attorney and public defender. I know that he will be a fair and effective prosecutor, and that public safety will be top priority under his leadership.”

Supervisor Saylor has served as Supervisor for Yolo County District 2 since 2011, representing Davis, UC Davis campus, Winters and the farm country of southwest Yolo County. He previously served as

City Councilmember and Mayor of Davis, and Trustee for the Davis School District.

Supervisor Saylor emphasized his and Mr. Johansson’s shared commitment to ensuring that all children have opportunities to thrive in Yolo County, particularly the county’s most vulnerable youth.

Supervisor Saylor said, “I share Dean Johansson’s commitment to shifting the focus from incarceration to education. I have worked hard to ensure that all Yolo children have the opportunity to thrive. Dean Johansson is committed to assure that children from the most vulnerable communities in Yolo are treated fairly rather than being ensnared in the criminal justice system. This is a stark difference from past practices. This is the evidence-based approach; this is smart on crime. I look forward to a fruitful partnership.”

Mr. Johansson has served for more than 20 years as an attorney in our justice system, as a Deputy District Attorney, criminal defense and civil rights attorney, and currently as a Yolo County Public Defender.  He is challenging the incumbent District Attorney Jeff Reisig.

To our Sierra Club members and the Yolo County public –

We were convinced of our choice based on Mr. Johansson’s extensive and demonstrable commitment to environmental and social justice and his unwavering support for rights of victims and defendants in the judicial system. Mr. Johansson’s platform embraces a progressive, humane, and evidence-based approach to criminal justice that exactly aligns with the core beliefs of most Sierra Clubbers.

For instance, he proposes changes that will make Yolo Co. a leader in criminal justice reform by using incarceration only for those who pose a true danger to public safety. He advocates for simply dismissing minor past marijuana-related offenses rather than burdening those affected with the costly and complex legal process currently required to clear these records. He proposes to invest in programs that enable people to access mental health and substance abuse treatment without being pulled into the criminal justice system. And he wants to stop seeking the death penalty in Yolo County and supports the passage of legislation eliminating the death penalty in California.

Mr. Johansson also proposes to end current blatant practices that criminalize poor and homeless people by eliminating excessive cash bail for minor offenses and implementing a sensible community-based system that relies on fair and data-driven assessments to ensure that the accused appear for trial. He will also end the practice of charging exorbitant fees associated with incarceration.

Dean will also support, instead of victimize, the most vulnerable in our community. When the criminal justice system is misused (as is now all too often the case), it deepens racial and economic disparities, and creates fear among our most vulnerable community members.  As District Attorney, Mr. Johansson will listen to and advocate for communities of color, immigrant communities, working-class communities, LGBTQ communities, victims of gender-based violence, and the ex-incarcerated.

He also will implement programs that enable the ex-incarcerated to become rehabilitated and re-integrated into their communities and hold accountable corporations that violate the rights and well-being of their workers especially farm workers, whose health and safety have long been disregarded in Yolo Co. And he will ensure that those working in the District Attorney’s Office actually reflect the great diversity of our community.

We also support Dean because we believe he will truly invest in our children’s futures. Our current DA’s approach to juvenile criminal justice relies far too heavily on incarceration for minor offenses that contributes to racial and economic disparities. Yolo County is consistently above the state average in terms of the percentage of its youth who are in the criminal justice system, despite having a below-average rate of violent crime. Moreover, the current DA’s use of “direct filing” (i.e. the prosecution of youth as adults) has overwhelmingly affected Latino youth in Yolo County.

The current DA also opposed Proposition 57, which eliminated prosecutors’ discretion to try youth as adults which legislation was supported by 68% of Yolo voters. Racial disparities have also been greatly exacerbated by the current DA’s overzealous pursuit of gang injunctions against youth in predominantly Latino neighborhoods in West Sacramento. Like many Yolo County community members, Dean recognizes that for too long, California has prioritized expanding its prison system over its education system, depriving our youth of opportunities to succeed. Together with supporters like you, Dean will invest in all of our children’s futures.

Finally, we respect Mr. Johansson’s pledge to ensure transparency and accountability in the local criminal justice system. A number of practices in our county violate community members’ rights and liberties, including the seizure of property without clear and convincing evidence of criminal activity (a practice known as civil asset forfeiture) and the prosecution of cases that lack convincing and legally obtained evidence. The current DA also undermines public safety and the community’s trust in government by failing to thoroughly investigate and prosecute cases of police misconduct.

Dean will 1) reform civil asset forfeiture, building in safeguards to ensure that the practice cannot be used to victimize innocent community members, 2) support comprehensive independent investigations into officer-involved shootings and complaints of excessive force, and 3) work tirelessly to exonerate and free the wrongly convicted and enact the highest standards to prevent others from being wrongly convicted.

For all of these reasons, we enthusiastically urge you to join us and vote for Dean Johansson for Yolo Co. District Attorney.