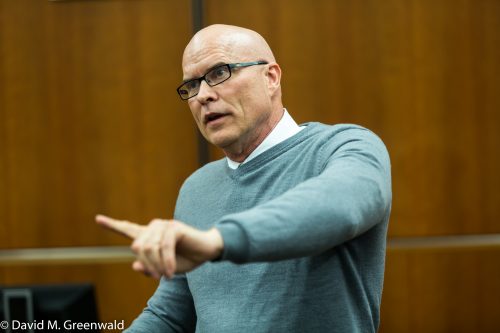 The Davis Enterprise this week endorsed Jeff Reisig for district attorney.  Really, there is no surprise there.  In fact, the only surprise would have been had they endorsed challenger Dean Johansson.

However, the arguments they made were disappointing and at times inaccurate.  The Enterprise wrote, “In addition to being a tough, effective prosecutor, he’s a tireless worker for the rights of crime victims, always making sure their voices are heard. If he did nothing else, his effectiveness at the primary part of his job would merit his re-election.”

As I said, it is not really a surprise that the Enterprise would endorse Reisig.  What troubles me is this line: “Despite efforts by those opposed to him to portray him as something that he is not, Reisig is, in fact, one of the most progressive district attorneys in the state. His Neighborhood Court initiative brought restorative justice into the official fold, and set an example that is being sought by other D.A.’s. There’s also Mental Health Court, Drug Court and implicit-bias training for Yolo prosecutors. The truth is that under Reisig’s leadership, Yolo County is a leader in reforming the justice system.”

This is simply not true.  Yolo County has one of the highest trial rates in the state.  Dean Johansson has pointed out that, under Jeff Reisig’s watch, Yolo County has been at the top of the list of per capita incarceration, ranking as high as second in the state, and currently 14th.  For a county that is in the middle of the pack in crime, that is a high number.

Yolo County ranked at the top of the list in terms of direct filing of juveniles in adult court.  And there is a disproportionate prosecution as well – blacks are ten times more likely to be tried

in Yolo County than whites, while Hispanics are twice as likely.

These are not signs of a progressive district attorney.  Neither for that matter is his opposition to statewide criminal justice reform matters.

Jeff Reisig is one of four DAs in the entire state to oppose the legalization of marijuana (Prop. 64).  That puts him in interesting company.  The other three were Anne Marie-Schubert, the embattled DA in Sacramento, Tony Rackauckas, the scandal-torn DA in Orange County in the center of the jailhouse informant controversy, and Mike Ramos of San Bernardino County, the outspoken head of the DA’s Association, who has been called an “innocence denier” for his insistence that wrongfully convicted people are guilty.

In addition, he opposed AB 109.  He opposed the death penalty ban – twice.  He supported speeding up the death penalty.  He opposed Prop. 47 and Prop. 57.  And he took no position on three strikes reform – when his office had infamously pursued a third strike for a man who stole a $3.99 bag of shredded cheese from the Woodland Nugget.

To call him one of the most progressive DAs in the state is either an indictment of all the other DAs or a misuse of the word progressive.

The Eric Pape case that we highlighted yesterday is a great example of what is wrong here.

We have been covering the courts for over eight years now and we see these kinds of cases all the time.  Usually they don’t end in suicide, obviously, but they are cases that are overcharged or perhaps criminalized unnecessarily and could be better handled in other ways.

For all of the talk about mental health court or neighborhood court, neither of them addressed this situation.

whole host of other cases that don’t need to be in the court system.  The neighborhood court addresses “victimless” crimes rather than situations like this, where one person causes harm to another.

Counties like Fresno, on the other hand, have had VORPs (Victim-Offender Reconciliation Processes) for years.  we are actually far behind the times, despite the propaganda coming from his office.

No one covers these cases but us.  No one knows about them.  But they define Jeff Reisig’s tenure as DA.  But if you are not in the court, you don’t see it.  We’ve been there for eight years and we see these kinds of cases all the time.  The only difference in the case of Eric Pape is that he happened to end his life as the result of the long and drawn out criminal proceedings.

The Enterprise continued: “The attacks on Reisig have been driven entirely by ideology.”

It is not clear exactly what that means, but I would argue, what is wrong with replacing the prosecutor if you disagree with his charging policies?

Dean Johansson has modeled his candidacy after Philadelphia’s newly-elected DA Larry Krasner.  Mr. Krasner assumed the office as a man who cut his teeth as a civil rights attorney.  He is a strong proponent of police reform and criminal justice reform.

In media coverage, Mr. Krasner has said he had never thought about running for district attorney and spent his career on the other side of the courtroom, and even has sued police dozens of times for corruption and abuse.

When he looked at the candidates for DA, Mr. Krasner didn’t think any were fit for the job.

“I saw no potential for real transformational change,” he told the media, so he ran himself.

“The culture around criminal justice has not been justice,” Mr. Krasner said when he announced his candidacy. He described a record of mandatory and “excessive” sentencing and a system that disproportionately incarcerates minorities and poor people.

Sound familiar?  Dean Johansson likes to talk about the fact that when he first decided to run, he was looking for someone else to support.  First it was Larry Eichele, the longtime deputy district attorney, now fighting for his job in the DA’s office.  When Larry Eichele bowed out, Johansson was looking for a woman from outside of the county.

Not being able to find one, he said, “I wasn’t going to ask someone else to do what I wouldn’t do myself.”  So he ran.

He has been surprised by the reception and his insurgent campaign has picked up steam.  This week we have seen a series of attacks against him from various surrogates of the incumbent.

But even the opposition has been surprised by how much traction he has gotten.  Dean Johansson told a group that when he announced, veteran political consultants told him he was in too late and that he needed $150,000 just to get in the game.  Instead, they are making do with far less.

A Reisig supporter told me last week that they had spoken with a key volunteer for the Reisig campaign who said that when they walk precincts they are amazed by how many people are telling them not to bother talking to them, they are supporting Johansson.

Will it be enough to unseat the 12-year veteran DA?  Hard to say in a race without polling.  What we do know is that there is a clear difference between the two candidates – one stands for criminal justice reform and the other stands for traditional prosecutions.

Frankly, that is a good thing – the voters have a clear choice in the direction they want.  My only objection is not only that the Enterprise has endorsed one of the options, but rather that they have tried to turn Jeff Reisig into something he is not.  He is not one of the most progressive DAs in the state – he is one of the least.

The voters can decide for themselves what they want.