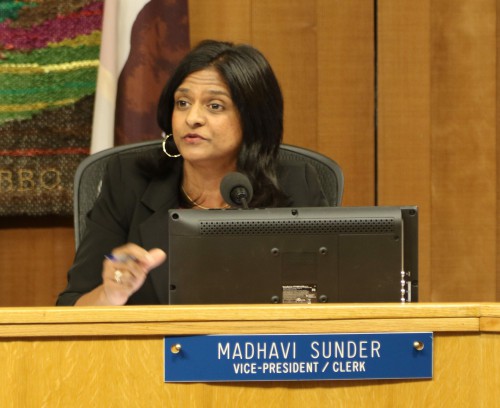 On Thursday, the school board met for a total of 25 minutes, half of which was to figure out how to fill a vacancy.  Given the timing of Madhavi Sunder’s resignation, the board could not by law leave her seat open until the November election.  Given the date, that meant they had to fill a vacancy.

“Education Code requires 130 days between the date of the election and decision to run an election,” Associate Superintendent Matt Best explained.  “We’ve already passed that 140 day window.  So really we’ve got in a practical sense, there’s not a practical way to run a special election at this time.”

“Your decision tonight is whether or not to run an appointment process,” he added.

Barbara Archer said, “If the trustee had four months or more left, we ‘shall’ do it.  We don’t have a choice.”

Matt Best said they were looking to replicate the process from 2014 by which Alan Fernandes was appointed to the board.  Matt Best recommended that the board finalize the application document that evening.

“We’re recommending that the applications be available to the public starting tomorrow,” Matt Best said.  “An application deadline that lasts one week and closes August 10, which is a Friday.  That

would (allow) us to include those applications in the board packet for the 16th of August.”

At the meeting on the 16th, the board would have the opportunity to interview the candidates who applied for the interim position.  He explained a process of instant run-off voting, voting for applicants until they get to one.

They would then swear that person in at the meeting on the 16th in order to meet their September 1 deadline for seating a new board member.

Bob Poppenga expressed the opinion, “in this particular open position, where we’re looking at maybe three months, I wanted to be clear that I would not vote for any current non-incumbent candidate to fill that position.”

He explained that there are two announced non-incumbents running in November.  “I think it would be terribly unfair to consider appointing a candidate that’s not an incumbent,” he said.

Barbara Archer did point out that when they were running, she, Bob Poppenga, Madhavi Sunder and Alan Fernandes, among others, all entered the appointment process.

“The difference there, Barbara, was that was for a two-year term,” he said.

“We can’t tell people not to apply,” Tom Adams said.  He said, that’s “really a discussion for August 16.”

Alan Fernandes asked, “What if no one applies?”

Matt Best responded, “Potentially there would be a vacancy.”

“So we would have fulfilled our obligation to seek an appointment,” Alan Fernandes stated.

“The same would happen if there was a 2-2 deadlock,” Matt Best added.

“Are we bound to appoint those who participate in the application process?” Alan Fernandes stated.

“You get to decide the appointment process.  If you wanted to select, you could do that.  As long as they met the criteria outlined in the education code,” Matt Best explained.

Share:
Tags:Alan FernandesBarbara ArcherBob PoppengaDJUSDElection 2018Madhavi SunderSchool BoardTom Adams
Previous : What Really Happened under the Sheets? Trial Resumes of a Massage Therapist Accused of Sexual Misconduct with a Client
Next : Commentary: UCD and City Going to Mediation to Avoid Litigation