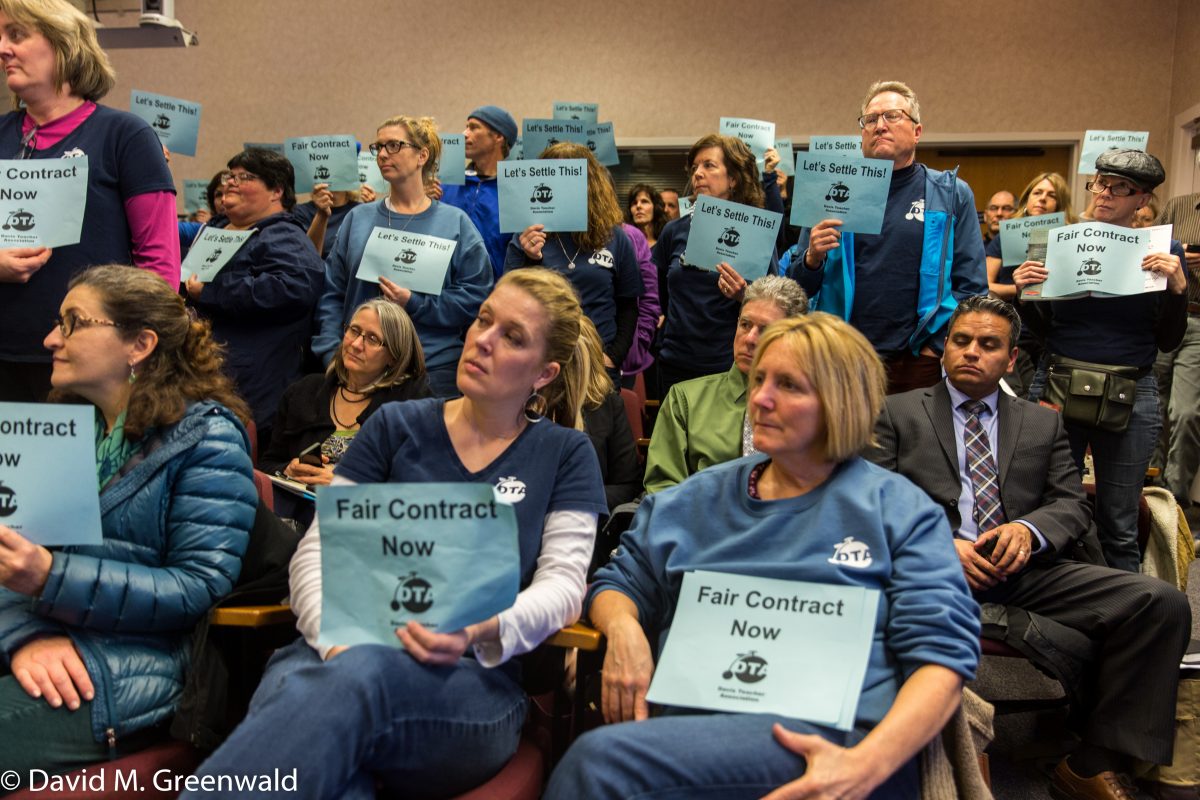 “This new law will provide a small but meaningful incentive for public educators and school staff to live in the community of Davis where they work,” Senator Dodd said.

It sounds good and is well-intentioned by both the senator and the governor, but the reality is that this bill will not amount to much if anything – at least not in Davis.

I say that somewhat ironically, since the bill only applies to DJUSD.

First of all, it does not apply retroactively.  That means that the current $620 parcel tax on the books is completely unaffected by this.

Second, the bill has a very limited shelf life: “The bill would make this authorization inoperative on January 1, 2021, but would provide that an exemption granted pursuant to this authorization remains in effect for the duration of the period for which the tax is imposed.”

That means the district must pass its new parcel tax in the next two years – 2019 or 2020 – in order for the exemption to be in effect.

Presumably the district could pass a new parcel tax in the next two years that could eat up the current parcel tax and enact a new larger one.  But at least the one circulated by Alan Fernandes,

that would be a majority vote, would not be such a parcel tax.

That would mean any teacher or district employee would only be exempted from perhaps $200 to $300 rather than the full $920 or so potential parcel tax that might be passed to continue school programs and also fund teacher salaries.

But there is more to this.  The senator calls this a “small” but “meaningful” incentive for educators and school staff to live in the community of Davis.  But that’s almost absurd.   It would be interesting to find out how many actual teachers live in Davis and own their own homes – but one would have to presume that to be an exceedingly small number.

It is probably more likely that upper administrators making in the six digits own homes in Davis and, if that is the case, again ironically enough, they too would be exempt from a new parcel tax.

The cost of housing in Davis is such that saving $200 or $300 a year on a parcel tax is not going to make any difference to a vast majority of district teachers who are largely frozen out of the market due to lack of compensation and the lack of overall affordable housing in the district.

The bottom line is that, while the district pushed for this, and Senator Dodd rightly carried this legislation, it is largely symbolic window dressing and if anything symbolizes what is wrong with the approach here.

The district faces a number of very serious problems in the coming years from lack of funding to a teacher compensation gap, and this community faces the problem of lack of affordable housing, both for teachers and district employees, not to mention young families.

If we do not address these serious problems, this district is not going to be what it once was.

There does not seem to be much discussion of these problems.

The first problem is the teacher compensation gap.  The school district temporarily addressed part of that issue last spring.  However, there are three issues that remain.  First, those were only temporary compensation hikes.  Second, they only partially addressed the compensation gap.  And third, just that pay increase will trigger about $1 million in a structural deficit which, if not addressed, will lead to cuts perhaps as soon as next spring.

The second problem is that the district has no solution laid out for addressing that funding gap.  Alan Fernandes proposed a majority parcel tax which would require a signature drive to get it on the ballot.  He quickly recognized that getting one on for the fall was too ambitious.  Now he is aiming for the spring.

But where is the urgency on the part of the teachers, district and board to get this done or make it be successful?  As I have pointed out before, there are flaws in the petition, and that appears to be the only solution on the table right now.

There is a facilities bond on the ballot for November.  It is important to note that the funding in that bond is desperately needed.  The school district has not passed such a bond in nearly two decades and they are relying on aging infrastructure and facilities that need upgrades – badly.

But the community needs to understand that state law on district financing precludes such funds from being used on instruction.  That means none of it can go to teacher compensation.

Bottom line – there seems to be no plan for coming up with the money needed to fund the compensation gap or deal with the spending that the board authorized last spring.

Finally, a third problem is broader than just the school district, and it is the problem of affordable housing in Davis.  One of the complications for the teacher compensation gap is that it is more expensive to live in Davis than in other communities – and yet we are paying our teachers less.  Which means most cannot live in Davis and those who do, for the most part are not homeowners.

Sorry, but this legislation isn’t going to change that and I think everyone involved understands that.  But it is an issue that needs to be discussed more thoroughly.

Along the same lines and actually a far more serious problem is that the cost of housing in Davis and the restrictions on growth have created a shrinking supply of housing for families in Davis, which is starting to shrink enrollment.  Declining enrollment represents a serious threat to school districts, as it decreases the amount of funding that comes in, even as obligations remain more static over time.

Between declining enrollment, the declining prospects for more local funding, and the disadvantages of LCFF (Local Control Funding Formula), DJUSD faces a very serious threat that to date has not had proper discussion in this community.

4 thoughts on “Sunday Commentary: It Will Take More Than Parcel Tax Exemptions”