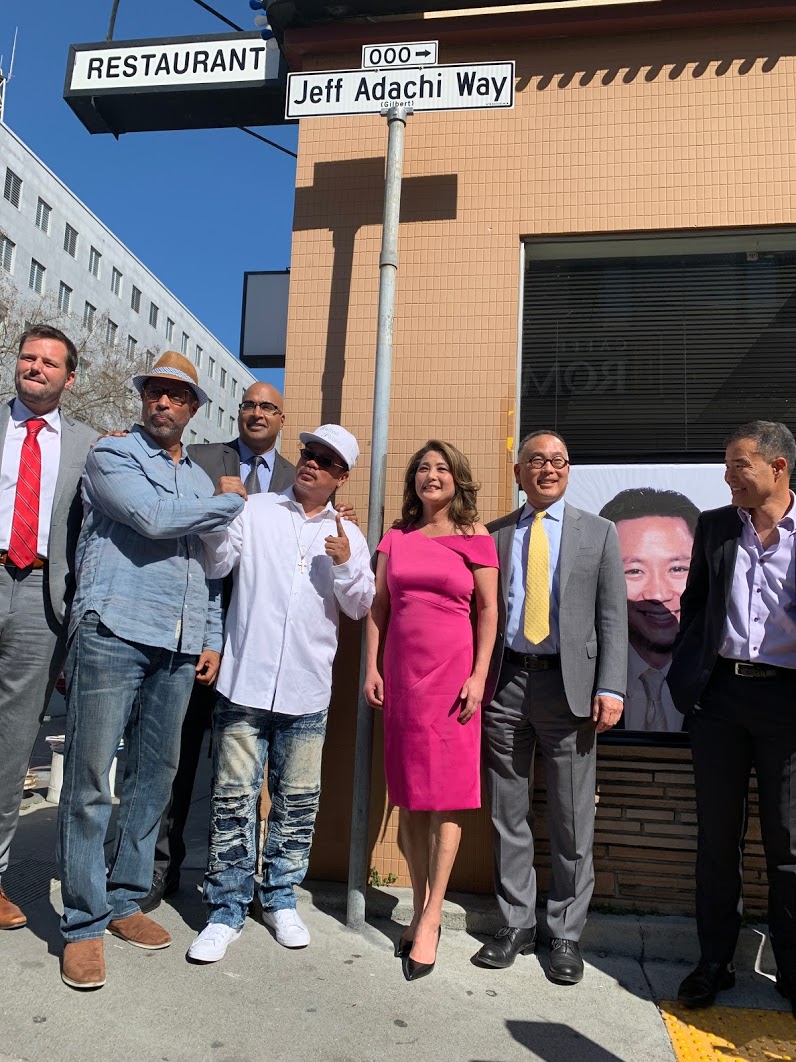 (From Press Release – Public Defender’s Office) – On Wednesday, February 26, 2020, Public Defender Mano Raju, Supervisor Matt Haney, the Adachi family, and community supporters of the late San Francisco Public Defender Jeff Adachi unveiled the new name of the street that runs directly behind the San Francisco Public Defender’s Office, “Jeff Adachi Way.” The singular block of Gilbert Street between Bryant and Brannan Streets will not only honor Adachi’s legacy, but also serve as a daily reminder and motivation to all public defenders who walk across the street to the Hall of Justice every day to fight for the rights of their indigent clients and their families.

San Francisco Public Defender Mano Raju, who was appointed and subsequently elected to the position after Adachi’s passing said, “Jeff Adachi forged a path for so many public defenders to courageously fight for the rights of our indigent clients and stand up to the inhumane failures of the criminal legal system. This street, that we walk every day, being named after him is not just a passive tribute, but will be an active presence for all of us to continue to walk the Jeff Adachi Way in our pursuit of true justice and meaningful reform.”

Supervisor Matt Haney, whose office helped pass the resolution to rename the block said, “Renaming the street that Jeff Adachi walked nearly every working day of the last 30 years is an entirely fitting tribute to his legacy. Jeff inspired multiple generations of lawyers to follow his example; to be fearless, to never waiver in the struggle for equal justice under the law,” says Supervisor Haney. “He was more than just a Public Defender, he was a community organizer that championed the fight to protect the vulnerable and marginalized.”

Deputy Public Defender Rebecca Young, who advocated for the street to be renamed, added, “It is entirely fitting that the first street in San Francisco to be named after a Japanese American be named for Jeff Adachi, a true champion against the systems that exacerbate prejudice and poverty and in turn feed the jails.”

Jeff Adachi began working at the San Francisco Public Defender’s Office in 1987. His developed a reputation as an phenomenal trial lawyer, which led him to become the Chief Attorney in 1999. He was elected to lead the office in 2002 as California’s only elected Public Defender, a role he served until his passing in February 2019 at age 59. In his tenure, he elevated the office to national prominence as leader for criminal justice reform, human rights, and police accountability. He was a beloved warrior for justice in San Francisco and throughout the country.