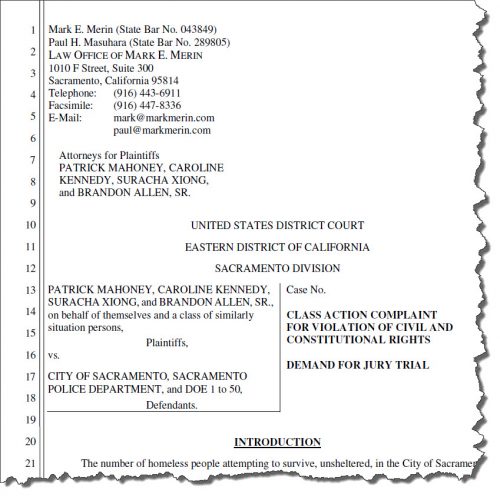 SACRAMENTO – Unhoused residents and their advocates in Sacramento have long complained that their basic civil rights – including the right to sleep and even the right to use a bathroom – have been severely restricted or just denied by police and city officials.

Advocates also charge that the city spends millions of tax dollars a year to “solve” the homeless problem – every year ideas are floated but don’t come to fruition; in fact, most of the money is used to pay police to roam the city, waking homeless up, and confiscating their medication, sleeping bags and other personal items.

And, still, claim advocates and the homeless, the unhoused don’t have the proverbial “pot to piss in.”

Tuesday, civil rights attorney Mark Merin filed a class action suit in federal court to stop city police and the city itself from removing a downtown port-a-potty from a homeless encampment. The city had an earlier port-a-potty removed earlier, but the group that paid for the port-a-potty put a new one in Monday.

Merin – on behalf of Patrick Mahoney, Caroline Kennedy, Suracha Xiong and Brandon Allen Sr. – wants to stop that bit of charity from being removed again.

The lawsuit, filed on behalf of a group of homeless folks from a 30-person encampment, claims that the “purpose and intent of the Defendants’ (the city, police and other officials) policy of

preventing placement and ordering removal of port-a-potties placed for the use of homeless encampments is to make the lives of homeless people even more miserable.”

Merin is asking that federal court “enjoin the City and its Police Department from removing or ordering the removal of a single port-a-potty placed in a convenient spot adjacent to a homeless tent encampment on North B Street in Sacramento, a community designated by its occupants ‘Hopeful Community.’”

The city has closed public restrooms, effectively, to deny homeless population a place to “go.” Cesar Chavez Plaza, which is a gathering place for those without houses, had a public restroom until 2015, until the city closed it. Most businesses in the city use keycodes and other locks to keep the homeless from using restroom facilities – even if they are customers.

The federal lawsuit asserts the city has a “practice of denying homeless people, living unsheltered throughout the City, access to sanitary bathroom facilities and preventing private citizens, even at their own expense, from providing port-a-potties for the use of homeless encampments located where no public bathrooms are available. This policy and practice includes removing or ordering removal of port-a-potties which are made available to homeless encampments.”

The suit further claims that the “Court can determine if federal, state, and local law precludes the City from endangering the health and welfare of the populace by removing a port-a-potty which provides the only sanitary way that a community of homeless persons in the immediate area can dispose of their human waste.”

Merin’s pleading points out that the city’s policy is designed to drive the homeless away – something long suspected by activist groups.

The suit charges, “This policy cannot and will not succeed in accomplishing the disappearance of homeless people, but what it has done and will do is immiserate homeless people while furthering the pollution of the city and surrounding environment as urine and human feces are deposited directly or indirectly in rivers and streams.”

The lawsuit maintains that health concerns have become a major concern for cities, including Sacramento, involving the unhoused population.

“Not surprisingly, without public restrooms available where homeless people survive on and near Sacramento rivers, human waste pollutes our rivers and streams leading to public outcries to our elected leaders to ‘do something to avert this crisis,’” the lawsuit states.

And, Merin’s filing doesn’t mince words, charging,“While politicians fret and pay consultants to plan and advise, but still neither provide shelter or restrooms, a few private citizens have stepped up to place and service port-a-potties where homeless encampments have sprung up. What does the City do? Order the portable toilets removed, endangering public health and depriving the homeless people who use the port-a-potties of dignity and the opportunity to dispose of their human waste in sanitary fashion.”

The statistics quoted in the federal brief are not in dispute.

Homeless in the city of Sacramento have multiplied in great numbers. Those “attempting to survive, unsheltered” have jumped by about 85 percent between 2015 and 2017, and jumped again the past two years by about 20 percent more.

Homeless counts are, according to unhoused advocates, a “joke.” While a count in 2018 said homeless hit about 6,000, those involved in helping the homeless said the number if 10,000 or more.

According to news reports, the city plans to vote later this month to add another public restroom. And a bathroom on Ahern Street between North A and B Streets is gone.

Share:
Tags:Court WatchFederal LawsuitHomelessMark MerinSacramento
Previous : Man Accused of Pimping and Pandering from His Jail Cell
Next : Was Man Conscious When He Stabbed Victim on SF Bus?