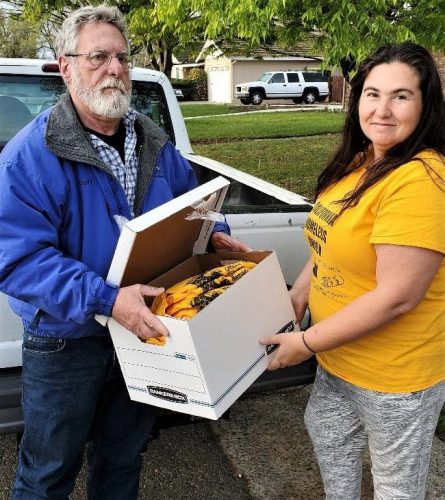 SACRAMENTO – While the city and county of Sacramento have banked millions of dollars to help the homeless during the COVID-19 pandemic, the Sacramento homeless union has informed THE VANGUARD that little is being done at the government level, and that officials are claiming credit for the work that a virtual army of volunteers is doing on the streets.

“They are misleading the public, claiming credit for medical effort, food delivery, and other work that the Union and SacSOUP, the Union-initiated coalition, are actually doing, while sitting on millions of dollars provided for that specific purpose,” said Anthony Prince, the homeless union chief counsel.

“I note that while your letter speaks of ‘plans’ for handwashing stations, hygiene items, delivery of food, and the provision of medical assessments, it is well known that it is the Sacramento Homeless Union that has actually provided these life-saving relief efforts directly to the camps with a small army of 200 volunteers – including 50 medical students and other health care professionals,” said Prince in a letter to the city Friday.

“The relief that the Homeless Union and the SacSOUP coalition is providing is saving lives, but what we are doing does not relieve the City of its responsibility to place unsheltered persons in hotel rooms,” said Prince, who has been exchanging letters with the city of Sacramento.

While the city claims it’s adding vital hand washing stations, Prince told THE VANGUARD he is now receiving reports that “either city or county officials are now actually removing hand washing stations to locations further away from the largest camps. If true, this is unacceptable. We need to add stations, and distribute them more widely, not move existing stations around making them

Under the governor’s new executive order, said Prince, local government is to “provide handwashing stations and restroom facilities,” not remove them.

But, he charged, that wouldn’t be the first violation of the recommendations by the state and the Centers for Disease Control involving the homeless and the coronavirus.

Law enforcement in the city of Sacramento, county, including the city of Citrus Heights, continue to roust the homeless from their locations – known as sweeps – causing the homeless to move around the county.

And that is what the CDC, said Prince, has specifically informed cities not to do with COVID-19 on the loose.

He warned that sweeping homeless into the streets from the shelter they’ve found – the only real protection they have from the elements and COVID-19 – is contrary to recommendations by the CDC and state’s “Shelter-in-Place” guidelines, which advise that sweeps can spread COVID-19 deeper into the community.

Prince quoted from CDC guidelines: “Unless individual housing units are available, do not clear encampments during community spread of COVID-19. Clearing encampments can cause people to disperse throughout the community and break connections with service providers. This increases the potential for infectious disease spread.”

“The city police and sheriff deputies continue sweeps, while failing to place homeless in rooms as they promise at news conferences,” said Prince. He said that city attorney Susana Wood denied police were conducting sweeps, although news media caught police doing just that by “forcibly” removed 70 homeless from City Hall.

Prince’s statements were echoed by the volunteers working on behalf of homeless on the streets of Sacramento.

“We are currently working with about 200 volunteers. We have implemented hand washing stations that were donated. There is a total of 30 in six locations that have high density of unhoused folks. We also now have a building team that has been deploying homemade hand washing stations,” said Sacramento Homeless Union President Crystal Sanchez.

She said volunteers – and not the city or county – have been distributing donated clothing, sanitation supplies and survival gear through the camps.

“And, since some of the normal places that homeless get food, are closed or only partially working, providing hot meals, we have a meals team that is getting hot meals to the camps. This has interlinked with Community involvement of people making food at home which we pick up and disperse,” she said.

Sanchez said volunteers have also created a “medical team with 25 to 50 students, doctors, Public Health nurses, and other medical personnel going into the camps and triaging people not only for COVID-19 but other ailments.”

She said the “multiple amazing efforts going on within our community contrasts” are not being recognized.

“We have heard little to nothing from our elected officials. Sweeps are still continuing even with a shelter in place order. Groups like ‘Sacramento Services Not Sweeps’ are working hard to bring a stop and awareness to the sweeps. Safeground and housing needs to happen immediately,” she said.

Sanchez insists that “Our officials lack of response is placing not only the unhoused but the housed as well at greater risk for contracting COVID-19. Our city and country are not communicating, with each other or with community advocates or businesses that are essential services to the unhoused community.”

She said that the “ bans and ordinances need to be temporarily suspended to keep unhoused folks in place. The policies that directly prevent those from being immediately housed need to be suspended immediately not in five weeks while we wade through red tape. Sacramento is playing a very dangerous game with its residents. We are again asking our electeds to reach out to us as we have made multiple attempts to reach out to them. Together we can stop this virus and state-created danger.”

The City, for its part, continues to tout the $4.3 million plus it has obtained – and about another $10 million it has to use in conjunction with County and other monies, will do the job in partnership with the county and other local governmental-related agencies known as the “Homelessness Response Team.”

The HRT has “focused on strategies and actions in three primary areas of direct services for people experiencing homelessness: Keeping existing shelters safe and operational through education and provision of supplies; Expanding sheltering capacity, focusing on isolation/quarantine opportunities; and
Supporting encampments through outreach, supply delivery, and increased sanitation,” said Wood.

Interestingly, when Gov. Newsom announced Project Roomkey,” the 15,000 motel bed effort across CA a week ago, he did not include Sacramento among the counties that he said were doing “more than all the other counties to really support the effort.”

“It is my sincere hope that this information will prove useful to you as you work with your clients to ensure that they are advised of all the efforts currently underway and can collaborate with all of the agencies and organizations working very hard together on these issues,” wrote city attorney Wood.

In reference to the city council’s “5 Point Plan to End Homelessness”, Wood pointed to the city’s construction of a “shelter at the City’s Meadowview complex that would house 100 people, build a shelter at W & X Street on state property and build tiny homes to house at risk homeless youth at Grove Street.

“These efforts have been funded and are in various states of contracting, designing and building, with some, such as the cottages at Grove A venue, being very close to completion. Despite the existence of the Covid-19 crisis, these projects have remained a top City priority and City staff together with its partner agency the Sacramento Housing and Redevelopment Agency (SHRA)..to get them up and running as soon as possible,” Wood said.

But, Prince and the homeless unions said they aren’t satisfied.

“Your letter fails to respond or even mention the concerns we raised regarding ongoing police sweeps of homeless persons and encampments, such as those carried out daily in front of City Hall, and elsewhere across the city,” they said.

“Your letter fails to report the results of any investigation into the conduct of the police department that you might have initiated in response to our concerns. Indeed, you do not deny that such sweeps are continuing,
despite science-based guidance from the U.S. Centers for Disease Control warning that sweeps, and the clearing of encampments poses an extreme risk of spreading the coronavirus,” Prince wrote.

“Your letter fails to dispute our report…that the City Hall plaza sweeps result in dispersal of dozens of homeless persons – and the police who dispersed them, who are also at personal risk— into the downtown streets,” the letter continued.

Homeless advocates also point to reports that at least two homeless person have tested positive for the COVID-19 virus, and that contact tracing is needed to warn, examine or treat those in contact with the individuals.

And the homeless advocates criticized the attempts by the city to place about 900 people in hotels rooms as “completely inadequate,” comparing it to San Francisco’s 10-day effort that found 7,000 hotel rooms for “all the city’s homeless.”

“Despite public statements by the City of Sacramento almost three weeks ago that hundreds of rooms would be provided to the homeless, your letter contains no information whatsoever, let alone actual numbers of how many, if any, of Sacramento’s 11,000 homeless have been placed in hotels. We think the City of Sacramento and Mayor Steinberg, a Co-Chair of the California State Commission on Homelessness and Supportive Housing, owe us an explanation,” said Prince.

“However, to the extent that any of the support that you claim is being provided to protect the homeless and the public at large, they are directly self-sabotaged by the City’s continued policy and practice of conducting homeless sweeps in direct disregard of CDC guidelines,” he wrote to city attorney Wood.