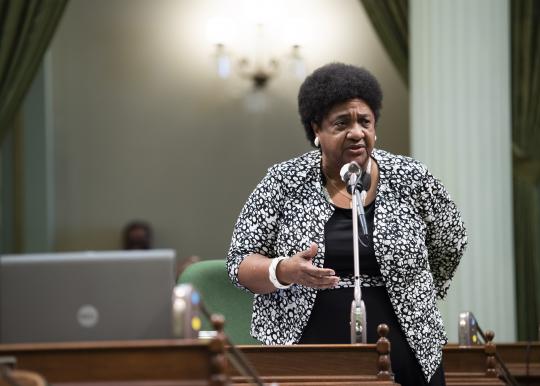 Last week, the State Assembly passed legislation that would repeal barriers to state contracting, employment and access to higher education for women and minorities.  The California Act for Economic Prosperity and Opportunity for All, authored by Assemblymember Shirley N. Weber, Ph.D. (D- San Diego), would repeal Proposition 209, California’s outdated law preventing full participation in California’s economic prosperity for over two decades. The measure passed with 60 votes.

“Since becoming law in 1996, Proposition 209 has cost women- and minority-owned businesses $1.1 billion each year,” said Assemblymember Weber. “It has perpetuated a wage gap wherein women make 80 cents on every dollar made by men and has allowed discriminatory hiring and contracting processes to continue unhindered.”

California is one of only eight states that does not allow race or gender to be considered in hiring, allotting state contracts, or accepting students into the state’s public colleges and universities.

Some legislators noted that the economic and health outcome disparities in communities of color during the COVID crisis and the recent protests in response to police brutality make it clear that there are still significant structural barriers to opportunity for people of color.

“We are living in a moment when so many are finally opening their eyes to the structural and institutional racism that has burdened the Black and Brown communities for generations,” said Lorena Gonzales (D- San Diego), a primary co-author of the bill. “Once you acknowledge that, then the next step you must take is to correct that injustice. With ACA 5, we have an opportunity to do

something. I know from personal experience—affirmative action allowed me a shot at college. With ACA 5, we can open up opportunities to attend an affordable college and end discrimination in access to government contracts.”

The bill attracted the support of Native Americans, a population that has historically been locked out of California’s prosperity.

He added, “Since then, California Indians have struggled to overcome other attempts at extermination: lack of access to health care, educational and economic opportunity. It is time again to move forward on the quest of fairness and equity for California Native Americans and other communities by supporting ACA 5.”

It will face a floor vote in the Senate later this month, before the June 25 deadline..

With its passage by the Assembly, ACA 5 became the first bill providing a path to a full restoration of affirmative action to pass out of one chamber of the California State Legislature.. The bill moves to the Senate for consideration in the next few weeks.