No amount of money will bring back Miles Hall, a young man shot and killed by Walnut Creek police in June 2019, the family said on Monday at a press conference in front of their home. Hall had a known mental health problem but the family believes that the police, instead of de-escalating the situation, used deadly force.

The $4 million settlement, the family and attorney John Burris stressed, will not bring back their beloved son, but they do hope by creating a foundation they can help others avoid the same fate.

“The importance of this case cannot be understated,” John Burris said. “The issue of the policing of the mentally impaired is one that always leads to dire consequences. Rarely have we had a case where a mentally impaired person’s family has called for help and the person didn’t end up getting shot

and killed by the police.”

He said while this case happened before the George Floyd case, it has had the same dramatic impact in terms of the impact on the community of Walnut Creek.

“This was such a shocking blueprint for a person who is a well-known member of this community, shot down under the circumstances that we have alleged in the complaint—that it was an unnecessary use-of-force death. It was a failure to deescalate and they really treated him more as a criminal rather than a mentally impaired person,” Burris explained.

The police knew he was suffering from mental illness.  “But yet the consequences were very much the same as what happens to lots of other people.”

The lawsuit was filed in 2019 and alleged that the Walnut Creek police officers violated Miles Hall’s civil rights, by using excessive force in shooting him dead when he was operating under a mental crisis.

All parties agreed to the settlement. 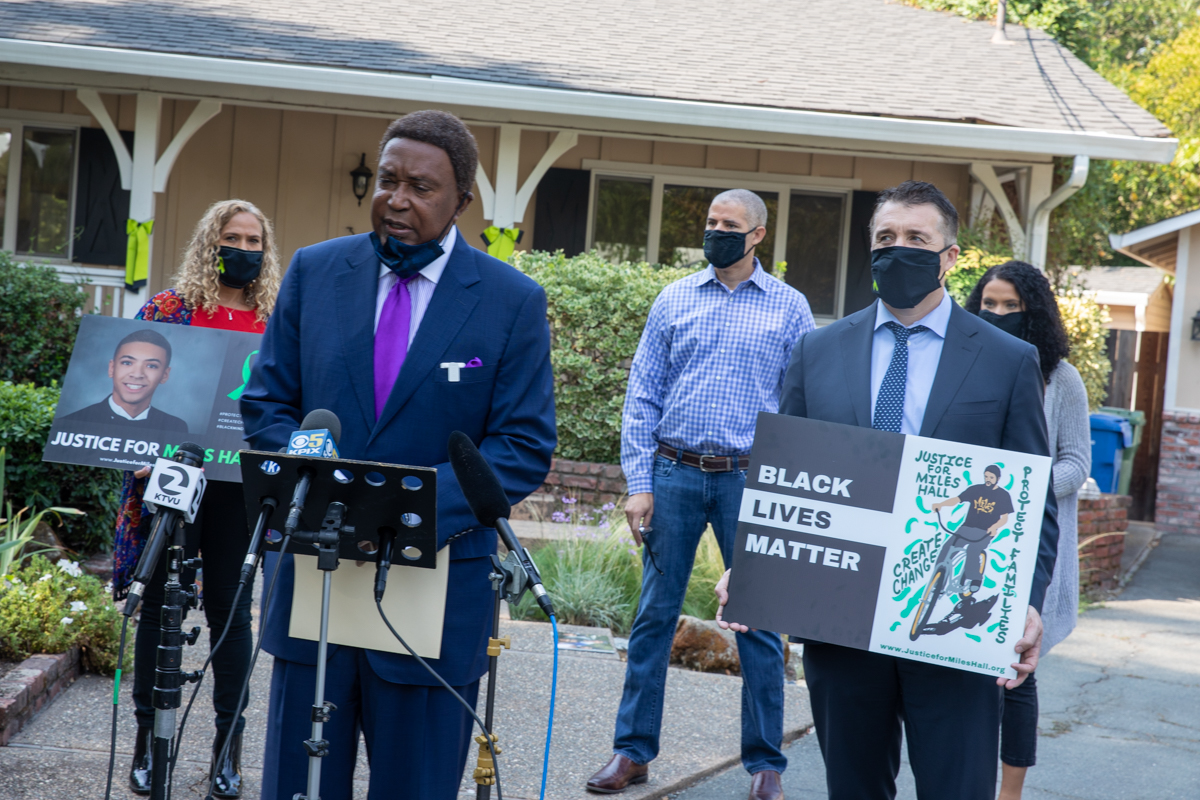 Taun Hall, the mother of Miles Hall, said, “This was never about money for us. When Miles was shot and killed right behind our house—it was the horror that this happened to us where we live here in Walnut Creek.”

Hall explained that they had made relations over two years with the police in town in helping their son deal with his mental illness.

“We are heartbroken, we are devastated,” she said. “The lawsuit is because we wanted to be sure that people know Mile’s name. (We) wanted to be sure that people knew that Miles (was) not a criminal, that he (was) a loving child. He had goals and aspirations just like your children do. it’s important for us, that it can help us so that we can help save someone from this happening again.”

She explained that they have created the Miles Hall Foundation to help achieve these goals and to create lasting positive change in our son’s name. They want to make it possible that those suffering from mental illness should not have to use police resources—“they have never come. They’re not trained to come. As a result we see what happened to Miles.

“Now with the foundation and our settlement, we plan on working towards those goals,” she said. “We really appreciate the community supporting us in this, because this could have been your child.”

“It happened to ours, it can happen to yours,” she said. “This is not justice here for Miles today. We will have justice when we have other ways our loved ones can get help so they don’t have to call the police.” 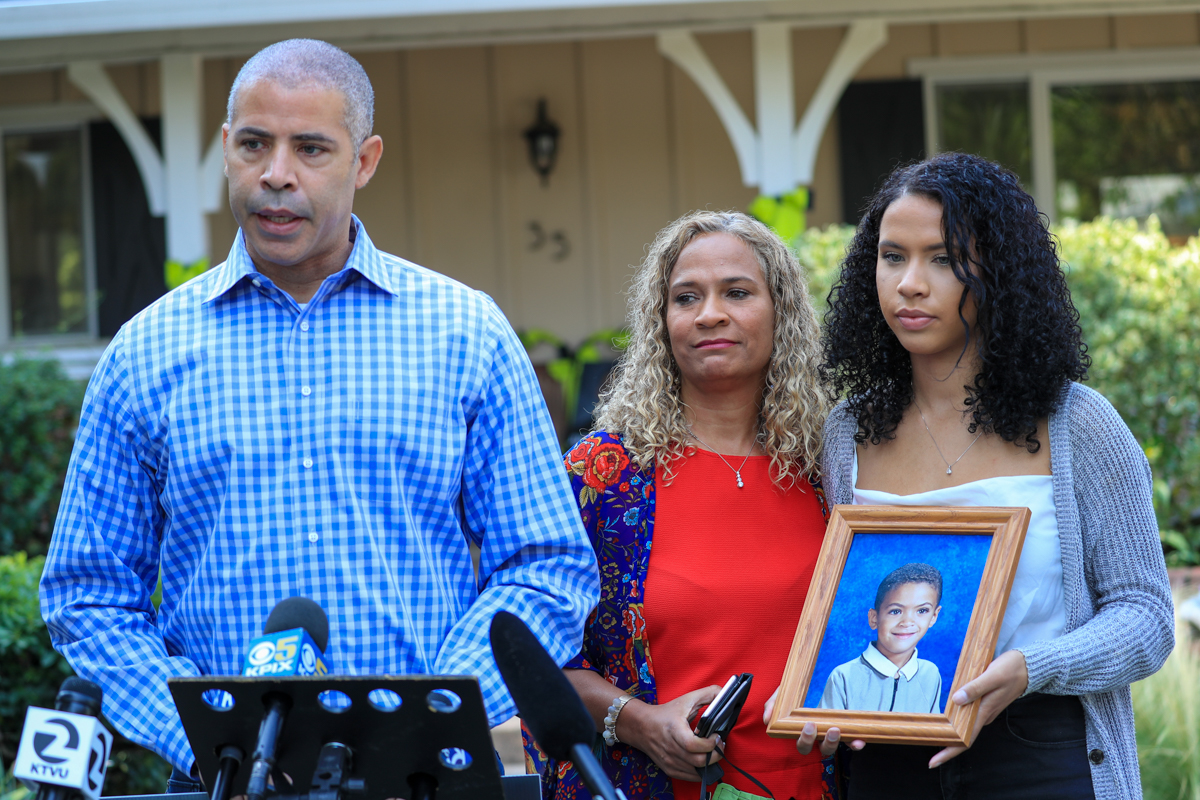 “This is a situation that never had to happen,” he said. “It was definitely an overreaction by the police when they came to address Miles and consequently shot him.

“All we cared about from the day Miles died until the day we die is having a better system in place,” he said. “We are going to make it so that people suffering from a mental health crisis do not have to go through what Miles went through—that they can get the appropriate health and response when needed.”

John Burris stated that this case is unusual because it presents the opportunity to really have an impact on the community greater than the impact of the case itself.

They are really pushing the idea of reimagining the police. Taun Hall noted the Cahoots model out of Oregon which, for 30 years in Eugene, has allowed for an innovative community-based public safety system to provide mental health first response for crises involving mental illness, homelessness, and addiction without the need to bring armed law enforcement into a volatile situation. 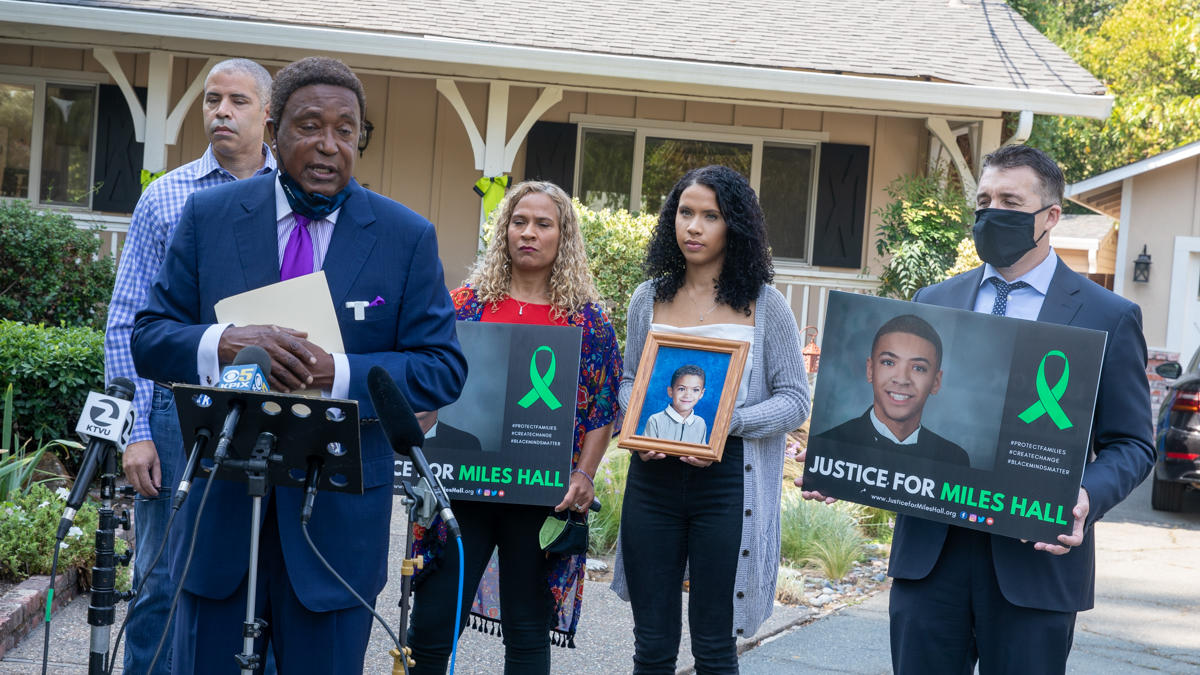 Walnut Creek has set aside funds to help create this program, the Halls said.

Taun Hall said that they have been working with NAMI in Contra Costa County, and they said “a lot of families don’t want to call the police because of what happened to Miles. They’re afraid—as they should be.”

“At this point there is no alternative to the police when you need help,” Scott Hall said.

John Burris said that, in this case, “there has been no effort to hold anyone accountable for what happened” and “there was no critical analysis or critical review of what they actually did.”

He believes it would improve the relationship between the police and community “if they were upfront and clear about their responsibilities and the misconduct that the officers were engaged in.”

He said without that, you don’t really correct their behavior.

There are conflicting accounts of what occurred on that fateful day in June 2019. The family called 911 saying that Miles was behaving erratically. He was running around and carrying a pry bar. The family says that, instead of officers de-escalating the situation, they opened fire.

Officers say Hall was charging at them. But Hall’s family says he was just running around the officers.  They don’t believe he posed a true threat to the police that day.

“The events of the day were tragic and difficult for all involved—the Hall family, the Walnut Creek community, and the police officers called to the scene,” the city of Walnut Creek said in a Friday news release. “While the City recognizes the continuing loss for the Hall family, it is the City’s sincere hope that settlement of this civil lawsuit will provide a step towards healing.” A long court battle, the city’s attorney Noah Blechman said in the release, “is not in the best interest of anyone involved.”