Blaming current conditions on traditions Ronald Reagan began, or the racist Republicans, as Jeffrey Sachs does (here) simplifies the story far too much.

(Democrat) John F. Kennedy cut taxes, and, in fairness, closed some tax loopholes, before Reagan. (Democrat) Jimmy Carter showed Reagan how to deregulate by deregulating trucking and airlines. Reagan’s forays into these areas was not anything new.

Carter’s deregulation also threw unions under the bus–their negotiated contracts with the deregulated industries were discarded. The Teamsters endorsed Reagan in the next presidential election–as did anti-Vietnam-war candidate Eugene McCarthy and civil rights leader Ralph Abernathy.

Interpreting backlash about the ’60s civil rights legislation, which a majority of Republicans then backed, as the primary cause of New Deal Democrats’ defeat, and Nixon’s election is also misguided.

True, Nixon supported the politically powerful Southern oligarchy, which promoted racism to subdue protests from debtors. But saying racism is the basis of this policy is a fundamental mistake that continues to resonate through civic discourse even now. Debt peonage is the primary cause; racism is a symptom.

How did debt become so important?

In the aftermath of the Civil War, the South was both beaten militarily and impoverished economically. Not only was the flower of Confederate youth gone, their biggest assets–slaves–were no longer their asset.

So… Southerners became debtors. Lawrence Goodwyn’s book The Populist Moment, about the post-Civil-War gilded age that precedes the current one, notes that not only was Confederate money no good, all their banks failed – so they had no savings – and the entire Confederate South had less money than the state of Connecticut.

This meant Southerners were forced to make the preponderance of their purchases on credit from stores run by the “Furnishing Man” (later shortened to “the Man”). The Man was a merchant who sold essential goods on credit at interest that would make a payday lender blush. The crop lien was the Man’s security for these loans, and if the crop failed, or the price fell, the debtor bore all the risk.

“Saint Peter don’t you call me, ’cause I can’t go… I owe my soul to the company store'” is a lyric from the age of debt peonage. The People’s Party and the Farmers’ Alliance were two responses to this situation, just as Bernie Sanders is a more recent response.

Meanwhile, our central bank (“The Fed”) reports that 40 percent of the U.S. population can’t handle a $400 emergency without selling something or borrowing. History may not repeat itself, but it certainly rhymes.

In the interest of deflecting dissatisfaction toward someone else, the bankers and the Man settled on the lesser races and former slaves as an appropriate scapegoat. Debt peons would accept their circumstances willingly provided the former slaves were kept even lower.

In more recent times, the Vietnamese understood this all too well.

The French colonial oligarchy kept them in debt peonage. That’s why the Vietnamese fought with unmatched determination to throw off the shackles of debt, even when the better-armed Americans decided to prop up that same French-inspired oligarchy, even going so far as discarding the treaty ending World War II, which would have allowed Vietnam to elect its post-colonial government.*

Incidentally, Vietnam has a population of roughly 100 million, and just experienced its 35th COVID-19 case. Who is the sh*thole now?

Creating indebtedness is an essential part of Colonialism. Even the Romans urged their conquests to go into debt.

Tom Perkins’ Confessions of an Economic Hit Man documents how he abused economic calculations to justify too-large debts to the U.S. and its institutions, the World Bank, and the IMF. Once colonies have all their economic excess going toward repaying debts, the colony has been reduced to debt peonage.

Sachs’ assertion that (Democrat) LBJ’s federal Vietnam war and “war on poverty” spending was what increased U.S. inflation does not withstand the slightest scrutiny. According to the U.S. Consumer Price Index, inflation was lower during the ’60s Vietnam War than during the 1950’s. 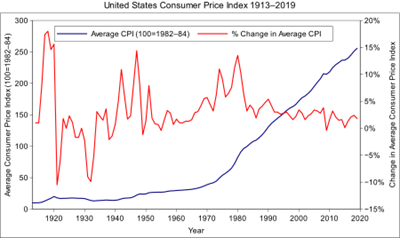 Oil Shortage was at the root of ’70s inflation

So why did inflation really take off?

Pre-fracking U.S. peak oil production was in 1971. In 1973, in response to their dissatisfaction with the Yom Kippur war, the Saudis and OPEC decided to use the “oil weapon,” and curtail supplies.

Industry historian Daniel Yergin reports this diminished supplies by no more than three percent, worldwide, but it was the first time the U.S. could not produce more oil to compensate for a shortfall in imports.

As you can see from the graph above, the ’70s are when inflation really took off.

To appreciate how essential energy, and particularly petroleum is to the U.S. economy, Michael Pollan reports that for every one calorie of food, U.S. agriculture burns 10 calories of oil. Petrochemicals are ubiquitous.

The price of a barrel of oil in 1971 was $1.75. That price quadrupled almost overnight when the Arab oil embargo began, peaking in 1982 at $42/bbl (roughly the current, inflation-adjusted price). Reagan got lucky because Alaska’s North Slope came online in the ’80s, increasing oil supplies domestically, and the price came down to around $10/bbl before gradually increasing to the current price.

In any case, despite Sach’s assertions to the contrary, LBJ’s government spending was not at the root of the ’70s inflation. Another invalidation of Sachs’ theory about the root of inflation being government overspending is a recent Cato institute study of 56 hyperinflations throughout history.

Economist Stephanie Kelton says: “Not a single one of … 56 cases were caused by a central bank that ran amok [i.e. a government that spent too much]. In virtually every case, the inflation was not caused by too much money but too few goods.”

Finally, Sachs implies that federal debt is a bad thing. This is nothing new for Sachs, who said, “The result [of Reagan’s fiscal policy] has been a massive buildup of federal government debt…and [it] will likely soar further because of further urgent spending related to Covid-19.”

At least Sachs says the government owes the debt to the public. That is correct. What’s missing, however, is the note that federal spending is in dollars, which government can create literally without limit.

We’ll run out of dollars when the Bureau of Weights and Measures runs out of inches. Ask yourself what kind of hardship a mortgage would be if you could print the means to repay it in the back bedroom. That’s the power of a sovereign, fiat currency creator, like the U.S.

Another more surprising conclusion: Tax revenues do not, and cannot, limit federal programs. Where would people get the dollars to pay taxes if the government didn’t spend them first, without waiting for tax revenue?

It’s not “Tax and Spend”… it can’t be. It must be “Spend first, then retrieve some dollars in taxes.” And what do we call the dollars not retrieved? Answer #1: the dollar financial assets of the population. Answer #2: national ‘debt.’ It’s just like your bank account.

That’s your asset, but to the bank, it’s a liability.

Federal fiscal policies have certainly favored the wealthy since Reagan, whose deficit was almost entirely pocketed by the rich.

Neoclassical (conventional) economics as practiced by Sachs blesses creating this kind of inequity. Sachs himself has been a promoter of austerity and “shock therapy” that worsened the conditions he now decries (read this by Modern Money Theorist Bill Mitchell for the entire story).

So Sachs’ economic understanding is both shallow and misleading. Like most conventional economists, he ignores the role private debt plays in the economy, and decries federal debt as something shameful. Really? Is your bank account the occasion for shame too? It’s a debt too…at least to the bank!

Sachs’ prescription for increased taxation might be useful in re-leveling the playing field for the poor, but it is not necessary to fund any programs, and it stirs up resentment, and well-funded opposition, from the rich.

So…let’s credit Sachs and the Democrats with having the right idea that government spending is important, and the reactionary right played a role in distorting public policy so we’re up a creek without a paddle, but laying all this at the foot of reactionary racism is just baloney.

Democrats from Edmund Muskie to Barack Obama, and their neoclassical economic advisors like Sachs himself promoted austerity and “shock therapy” in dealing with economies. Those are the genuine problems, and the movement toward those counter-productive public policies has been entirely bipartisan.

*This information comes from Jeffrey Race’s War Comes to Long An. Race was drafted to go to Vietnam, and learned Vietnamese on the boat over. Rather than huddle in some “strategic hamlet” he interviewed the population, prisoners and defectors to discover the genuine motivations for the Vietnamese resistance.

Mark Dempsey is a former technical writer, Realtor and vice-chairman of a Sacramento County Planning Advisory Council. He writes a blog at itssimplerthanitlooks.blogspot.com