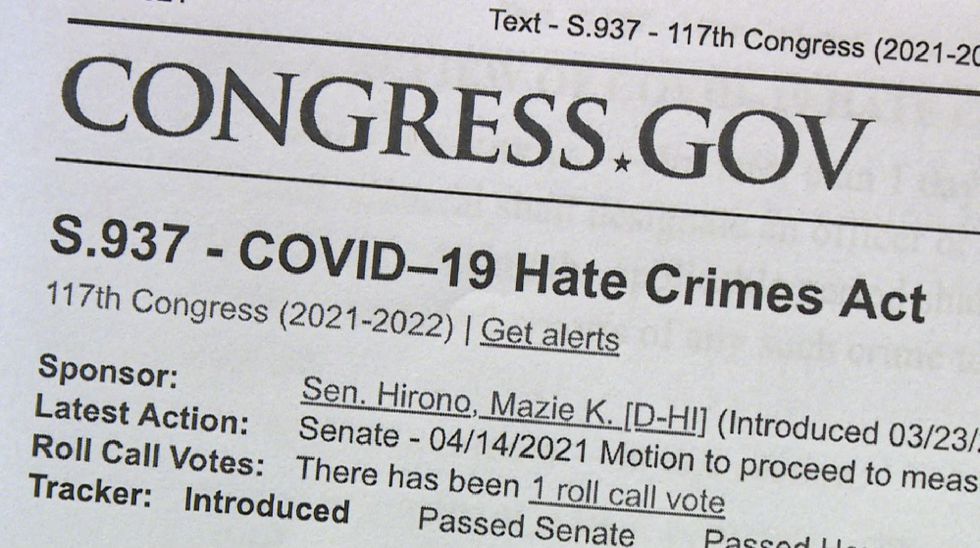 ATLANTA– On March 16, 2021, in Atlanta, Georgia, a 21-year-old white man committed a mass shooting, killing eight people, six of whom were women of Asian-American descent. Because of the location and the targeted nature of the victims, officials believe the shooting was racially motivated. This shooting was one of many crimes seen as an uptick in violence against Asian-Americans.

This shooting and many other crimes led the U.S. Senate to pass the COVID-19 Hate Crimes Act in an effort to address the rise in racially motivated violence against Asian-Americans. The bill cleared the Senate this month on April 22 with near-unanimous approval.

In his statement, the county sheriff’s spokesman stated that the shooter was having a “bad day,” to which the obvious moral response: “We all have bad days. That’s not an excuse or an explanation for murder.” In referring to a mass shooting that cost eight people their lives as the byproduct of a “bad day,” the spokesman undermined the gravity of this crime, thus causing increased fear and distress for Asian-Americans who have been brutalized throughout the pandemic.

Combined with the growing anti-Asian violence across the nation and in the Bay Area specifically, the Atlanta spa shooting sparked considerable outrage and shockwaves among the Asian-American community. Protests, donations, and Asian-American support campaigns took the nation by a storm.

Also, undoubtedly the ongoing COVID-19 pandemic has brought forth prejudices and the desire to project blame onto the “other.” The fact that those in power, specifically government officials, have repeatedly labeled the virus the “Kung Flu” and leaned into racist rhetoric has only exacerbated the culture of violence and hate crimes against the Asian-American community.

But prejudice against the Asian-American community is nothing new to the United States. Historically, Asians have been scapegoated for disease and economic fallouts, and COVID-19 has drawn some significant parallels from the past.

In a recent NPR interview, Dale Minami, a former UC Berkeley Asian-American Studies Professor, noted, “I think during periods of great tension in this country, our insecurity, fears and anxieties rise, and that undercurrent of racism that has gone through the United States history throughout its beginning tends to overflow. And that from the first immigration of Chinese to this country in the 1850s, to the present, you’ve seen an ebb and flow of such violence. 1871, there’s a massacre of 20 Chinese Americans in LA. They were lynched. We’ve seen the incarceration of Japanese Americans, the murder of Vincent Chin in 1982, demonization of Chinese during the McCarthy era…”

He continued to discuss the historical implications of war for the Asian-American identity, stating, “The tensions rise exponentially during times of war. In the last three major wars, the United States fought war against Asian countries—Japan, Korea and Vietnam. And that leads not only to dehumanization of those people simply to justify, you know, psychologically the killing of the, quote, ‘enemy.’ And those images remain.

“The antipathy remains and survives. And to dehumanize these people of color and bring that back to your own country, the United States, leads to a justification for just terrible treatment of Asian people.”

Proponents of the model minority myth cite it as evidence that systemic racism is no more, which weaponizes the success of Asian communities against other people of color. It also tends to classify all Asians as one homogenous group, which ignores the specific struggles faced by different groups.

The narrative that all Asian-Americans are hard-working and successful not only renders the harsh social and economic realities that a large number of Asian-Americans face as invisible, but also vastly oversimplifies the path to “success.” This idea has also been continuously used by the White community to discredit Black struggles, which allows racism against and between both groups to be swept under the carpet, with no care or responsibility assigned for the damage it causes.

As mentioned above, racism against Asian-Americans in recent months has occurred at an alarming rate, specifically in the Bay Area. This is particularly relevant to UC Berkeley students, approximately 40% of which identify as Asian-American.

UC Berkeley students have faced considerable fear about their safety and have voiced their frustrations through social media campaigns, sharing information about the hatred that has plagued their community and ways to help.

One Asian-American student noted, “Reading all these stories about hate crimes, I can’t help but think that that could be me or my family. I can’t stop visualizing those racist actions happening to us, and that makes me really scared. I think it’s worse here than at my home because I keep reading about so many crimes in the Bay Area.”

Now, the U.S. Senate has passed the COVID-19 Hate Crimes Act, which is designed to expand awareness on COVID-linked crimes, eliminate the use of racially discriminatory language when discussing the pandemic, and ensure maximum efficiency in achieving justice for the victims of these crimes.

While this is undoubtedly a step in the right direction, it is unfortunate that this legislation occurred as a necessary reaction rather than a preventative action. Racism cannot be addressed in the country if it cannot be addressed in our own communities. With the growing number of hate crimes, it is especially crucial that we hold ourselves accountable and stand in solidarity with Asian-American communities, both nationwide and close to home.

Meenu Pamula is a writer for The Vanguard at Berkeley’s Social Justice news desk. She is a fourth year student studying Molecular and Cellular Biology. She is from Fresno, California.

5 thoughts on “Bill Passes to Address Asian-American Hate Crimes – Is It Enough?”