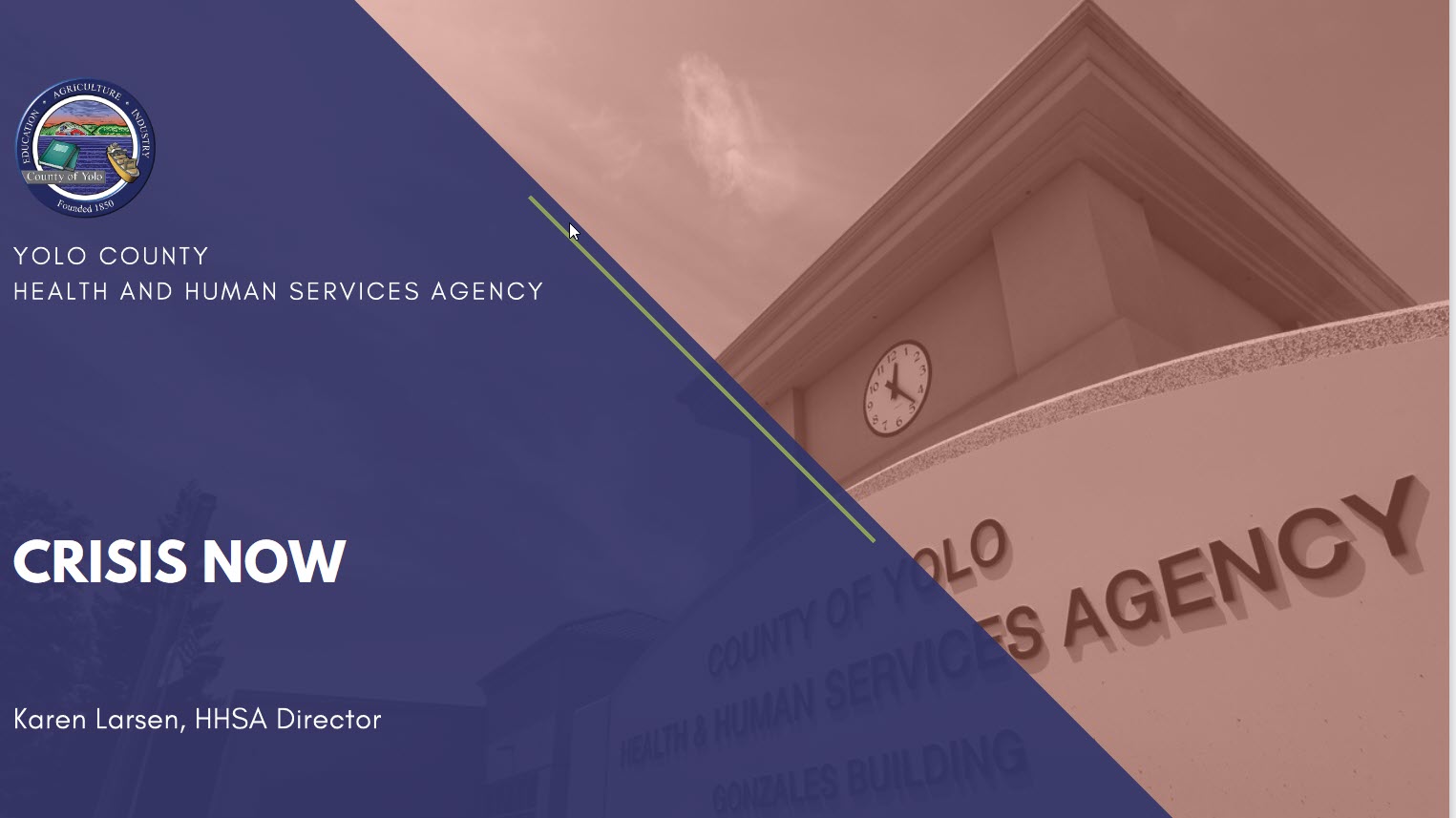 Davis, CA – Crisis Now is a dynamic model that would allow the city to shift away from police responses to mental health crises—but one of the biggest concerns is how to fund the model.

On Tuesday, the City Council listened to a presentation by Karen Larsen, Director of Yolo County Health and Human Services.  She explained that from 2014 to 2017, the city had entered into a partnership co-responder model under SB 82, which allowed for a social worker to be embedded with police on mental health calls.

But that funding ended in 2017, and while the police like that model, the current thinking is toward the Crisis Now model which calls for a separate response from the 911 emergency response.

This has been at work in Maricopa County, Arizona, the fourth largest county in the nation.  Every year they have been able to connect more than 23,000 people with services rather than police annually.  This has led to huge cost and resource savings.

According to a video shown by Larsen on Tuesday, it saves the equivalent of 37 full time police officers, reduces the wait time in emergency rooms by around a collective 45 years by diverting people in mental health crises away from standard ER beds, and they estimate it produces an overall cost saving of $37 million systemwide.

Larsen pointed out on any given day in Yolo County roughly 11 out of every 13 ER beds is filled with someone in mental health crisis rather than in need of medical attention.

First they would need a high tech crisis center.

The presentation described, “These programs use technology for real-time coordination across a system of care and leverage big data for performance improvement and accountability across systems.  At the same time, they provide high-touch support to individual and families in crisis.”

They would also need a 24/7 mobile crisis program which offers outreach and support where people in crisis are location.  She explained, “Programs should include contractually required response times and medical backup.”

They would also offer crisis stabilization programs.  These programs offer short-term sub-acute care for individuals who need support and observation.  However, they would not need ED (emergency department) holds or medical inpatient stay.  This lowers the cost and comes without the overheard of a hospital-based acute care.

Finally these programs “must include a recovery orientation, trauma-informed care, significant use of peer staff, a comment to Zero Suicide/Suicide Safer Care, strong commitments to safety for consumers and staff, and collaboration with law enforcement.”

They have three visions for the model going forward.

First a 24/7 Access/Crisis Call Center.  This, Larsen explained, they already have and it would come with a 988 number similar to 911, but would prompt a different response.

She noted that while law enforcement loves the co-responder model with the embedded social worker, the “crisis model would not have clinicians going out with law enforcement, clinicians would go out with someone with lived experience to respond to mental health crises.”

This would move toward the use of a crisis responder rather than a co-responder.

Finally they would have a 24/7 sobering or receiving center which would be a drop off location where police give them time to sober up, with appropriate resources.

As Larsen explained, a lot of times the problem can be resolved without a formal hold and with simply giving a person a safe place to calm down and sober up—rather than the need for more intense and longer duration treatment. 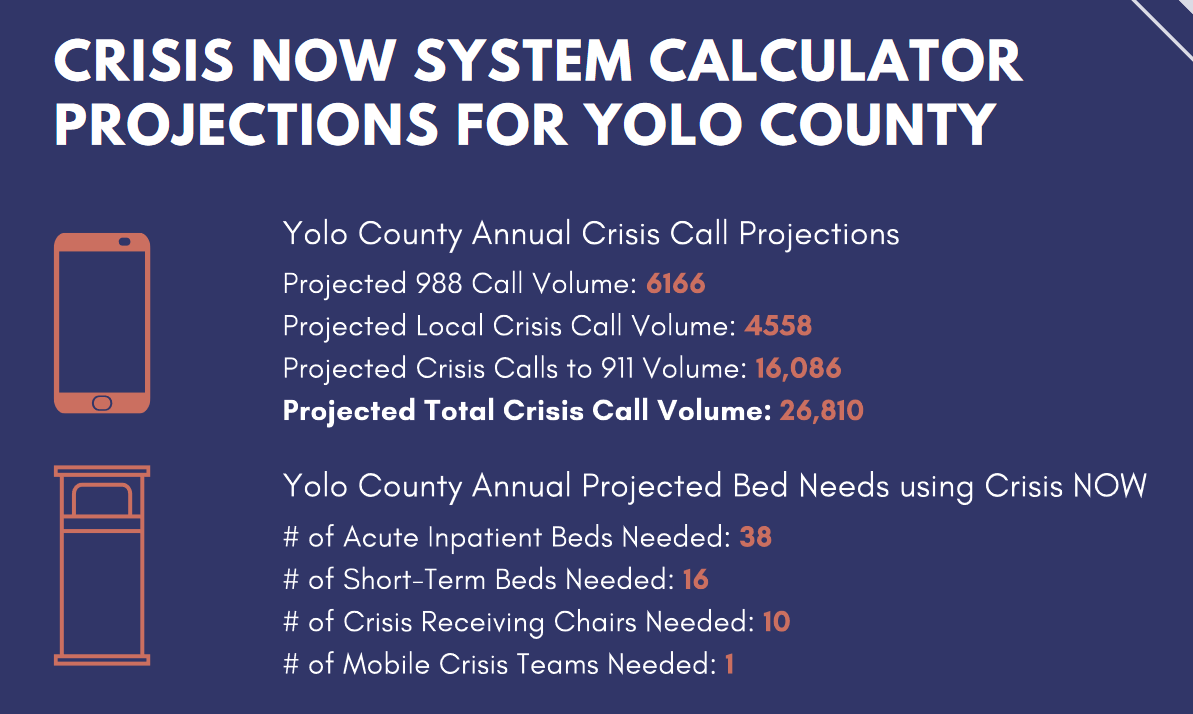 Right now the county does not have short-term beds.  Those who need about 23 hours or less of care.  Often these are drug induced crises, and they simply need time to sleep and get well and the problem could clear up without a need for a higher level of intervention.

A big issue here is funding.  Some of that funding is in place, but not all.

But this program would serve about 26 thousand calls for crisis service. 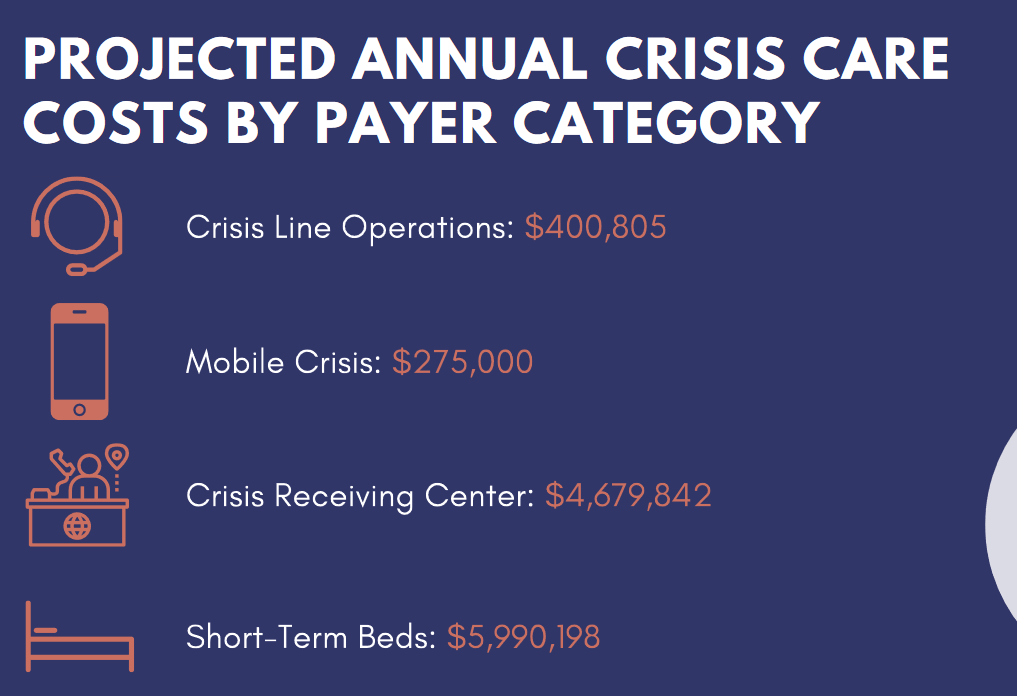 One of the big problems right now is cost.  Some of this is already funded, such as the $400,000 for crisis line operations.  In fact, she said that this level of care is already funded at a much higher cost.

The cost for the mobile crisis team would be for a single unit.

She noted that the crisis receiving center is the biggest price tag not currently funded.  She believes that the short-term beds are reimbursable through Medi-Cal and other funding streams. 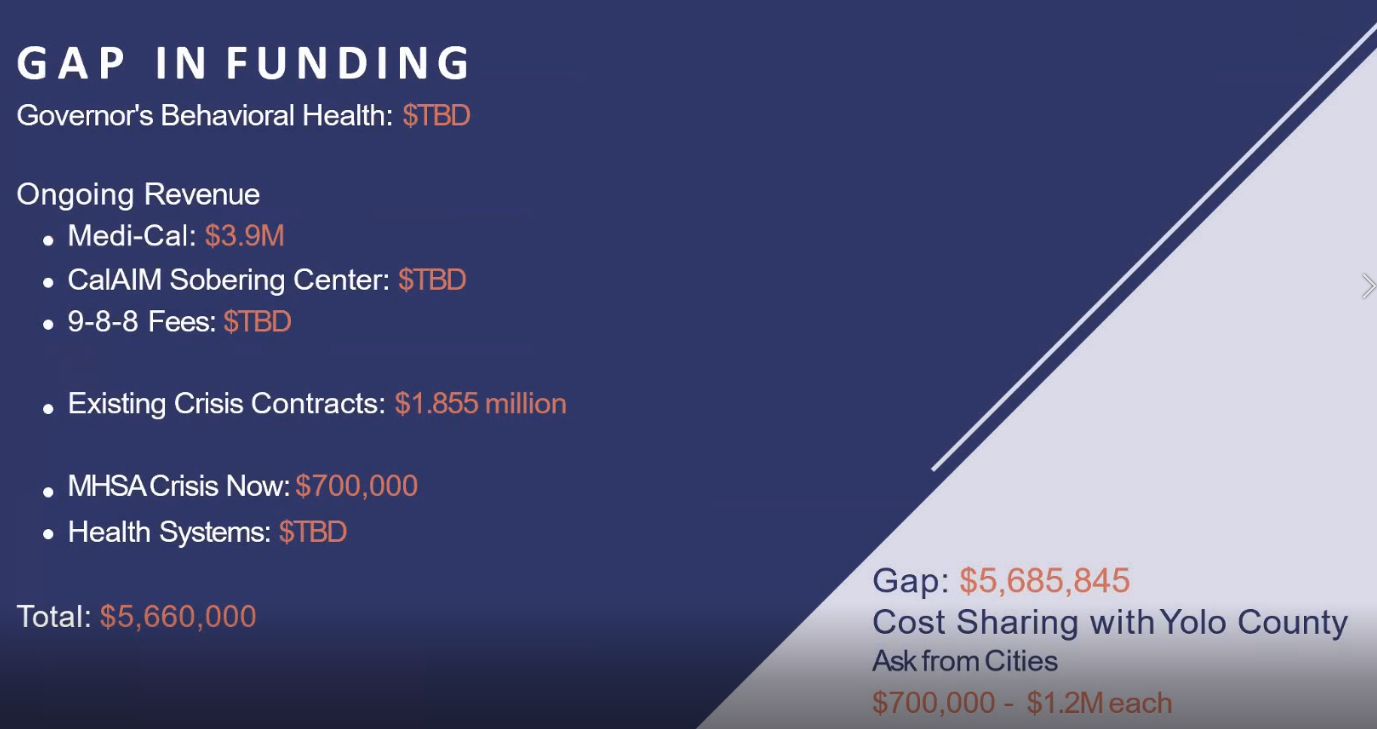 She noted that some of this is a moving part and could get funding in part by the Governor’s May Revise.

However, she estimates about a $5.6 million gap.  They would ask the three major cities in Yolo and the County to cost share on filling that cap.  She believes that cities could use ARP funds to match the proposal.

Strictly based on population rather than usage, Davis could be on the hook for 32 percent of the costs, somewhere between $700,000 and $1.2 million annually.

Councilmembers believe that if all three cities and the County go in on this, it could be workable but finding permanent funding is a challenge especially given the lack of flexibility in the budget.