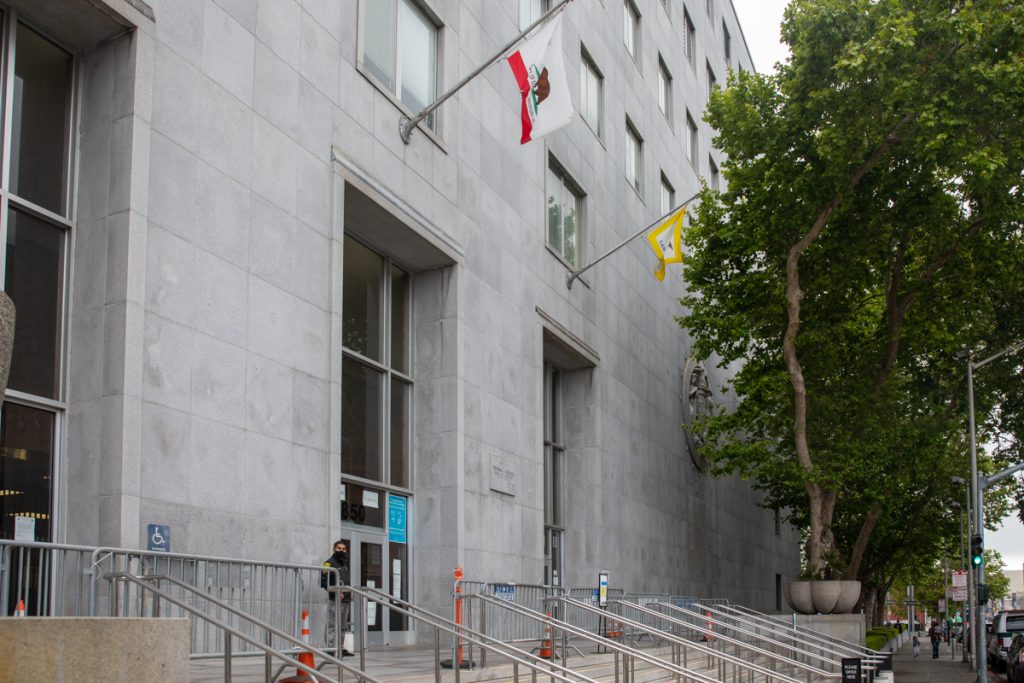 Eble is charged with one count of assault with a deadly weapon and one count of great bodily injury after allegedly stabbing the victim with a knife in May of 2019.

The morning began with Eble present in court with his attorney before Judge Eric R. Fleming,

Raja presented a series of “actual doubts” and “true facts” of the case that included all key pieces of evidence and witness/expert testimony.

To begin, the jury learned early in the evidence portion of the trial that Eble works on bikes as a hobby and had fixed the victim’s bike in 2018 for $75. The victim also knew of Eble as his father lived in the same apartment building with him.

According to the prosecutor, Julia Gonzalez, this $75 was never paid to Eble and thus became the reason the victim was stabbed.

However, it was shown that Eble had been stiffed previously in his life and was never violent with those individuals, opening room to question what would make him violent towards the alleged victim.

Did this money really equal a life or death situation? Raja asked, “No, it doesn’t,” he responded, “and it wasn’t proved he [Eble] would kill for this money.”

“Seventy-five dollars doesn’t make or break this man,” he continued to point out.

Raja then told the jury that “link after link” in this case “is based on assumptions, not evidence.”

It is no lie that the victim was harmed, and was stabbed, Raja made note. But one of the key pieces of evidence in this statement is that the victim testified that Eble had never been violent, opening up reason to affirm his innocence.

On the night of the alleged incident, Eble was heading home when he was approached by the victim on a motorcycle. The two exchanged words, “something about getting paid,” Raja said.

With the help of expert witness testimonies and statements from a nurse, it was confirmed that the victim was “intoxicated and belligerent” that same evening.

“Are we assuming that Nurse Blanco is untrained on intoxication?” Raja asked the jury.

In fact, the victim was so intoxicated that “he actually sucker punched Jeff” right in his face and although one witness claimed to have never seen this punch, he missed the first 12 seconds of the fight, indicating there could be a chance the punch was thrown.

After the alleged stabbing occurred on that night, the victim walked himself to St. Francis Hospital to receive proper medical care.

In his pocket was $379, raising the question “why would Jeff stab [the victim] without demanding the money?” and why wouldn’t the victim just give it to him if he had more than enough on him already?

The victim also testified that on that night he never saw anything (knife or other sharp object) in Eble’s hands.

An expert doctor witness, Dr. Campbell, was not even able to confirm that the sharp object used to stab the victim was definitely a knife, calling into question the credibility of the weapon used.

To this point, Raja brought out the motorcycle helmet that the victim was wearing and exhibited it to the jury and audience.

However, this helmet “was the wrong one” according to one earlier witness. “It was a Kermit the Frog helmet” the witness testified and Raja explained to the jury.

Just short of tears, Raja placed the helmet back on the ground and proceeded to show surveillance footage in which Gonzalez claims Eble had a knife in his hands.

The video showed Eble, along with four other men, walking inside what looked like to be a lobby of an apartment complex.

It was clear that no knife or sharp object is visible in Eble’s hands or anywhere on his outside body.

“It’s fear mongering, it’s violent, it’s speculation” that he had a knife in his hands, Raja exclaimed.

Raja then began explaining to the jury that, two years ago, the victim gave a different timeline of the night of the incident.

Video footage of the day the victim received surgery in the hospital was shown to the jury.

“I was able to walk to the hospital,” the victim told Officer Hallsy when he was asked how he was able to get there, which was conflicting with the testimony the victim gave earlier this year in which he claimed to have called a cab driver after realizing he was injured.

Officer Hallsy stated that if the victim did in fact mention a cab on the day of the surgery, he would have investigated said vehicle and corroborate the facts, but this never happened.

Raja proceeded to pull out an upper-body mannequin and placed the victim’s t-shirt on it. Showing it around to the jury and the audience, one could see the many holes and rips covering the t-shirt.

This is where the victim was allegedly stabbed, Raja explained after placing a zip-up cardigan on top of the t-shirt and a leather jacket on top of that.

With proper placement, Raja showed how the holes on the t-shirt, cardigan, and leather jacket did not line up, calling into question what weapon was used as well as how all the holes got there if they were in different spots.

The alleged motorcycle was then brought up to the jury. “Is this even the right motorcycle?” Raja asked after describing its features and designs.

The victim did not describe any motorcycle to the jury just weeks before. One of the officers on this case, Sergeant Moreno, asked to see the motorcycle to which prosecutor Gonzalez sent him photos through text messages.

Sergeant Moreno failed to follow up on these photos, leaving Raja to wonder if the motorcycle in the pictures was even the right one.

Furthermore, the victim’s father (who was also a witness in this case) asked Gonzalez to see the same pictures. She sent him the pictures through text messages the same way she communicated with Sergeant Moreno.

Raja then explained to the jury that what Gonzalez had done with the victim’s father was a form of cognitive bias and a big “framing error.”

Gonzalez had, either intentionally or unintentionally, led the victim’s father to believe that the pictures of the motorcycle were the correct ones because she personally sent them to him without allowing him to see any other types of motorcycles.

He had no choice but to agree with her when he was presented with the photos.

“This is how wrongful convictions happen,” Raja stated in fury with Gonzalez’s decisions.

Another simple fact was presented by Raja—the injury was not considered “great” by a doctor expert witness. In the doctor’s previous testimony, he claims the victim’s wound was only a “moderate injury,” thus giving the jury a reason to not charge Eble with the second count of great bodily injury.

Raja ended his closing argument by comparing Gonzalez’s methods to a theory that is known as Occam’s razor. This theory suggests that the “explanation that requires the least assumptions is the preferable one” and that this is exactly how Gonzalez wants the jury to proceed with their deliberations.

Prosecutor Julia Gonzalez then presented a short and weak rebuttal to the jury.

People should not be convicted based on if others dislike them, but the “strength of actual facts and real evidence” is what should be used, she opened.

Her whole argument was based on the question – is the victim believable? Of course he is, she argued, and “if you believe [the victim], then Mr. Eble must be guilty.”

Additionally, the DA suggested, if he were lying, the victim would have never admitted to have sucker punched Eble. “Would he embellish to make the facts worse than they are” in order to convict an innocent man? Gonzalez asked.

This case is purely circumstantial, she added, “because [the victim] was telling the truth.”

When describing his long testimony of what happened the night of the incident and at the hospital, Gonzalez claims that the victim “was literally shaking for nine hours” and he would have no reason to be so anxious or worried if he was lying about the whole story.

The victim was “suffering panic attacks” and showing up in court for three days was a difficult thing for him to do. “Why would he do that?” she said. “He didn’t invent a different story because there is no different story.”

If his testimony were a lie, “he would have sold the story,” but he did not, she explained.

Gonzalez ended her closing argument by claiming that the victim was not high on drugs the night of the incident, which could be proved with hospital records.

“You have to reject what is reasonable…the only reasonable thing is that he [Eble] did it” she stated, “this was not about $75, it was about social principle…this was an impulsive act…heat of the moment.

“Anyone can snap, and that’s what this case was,” she finished.

The case now goes to the jury.