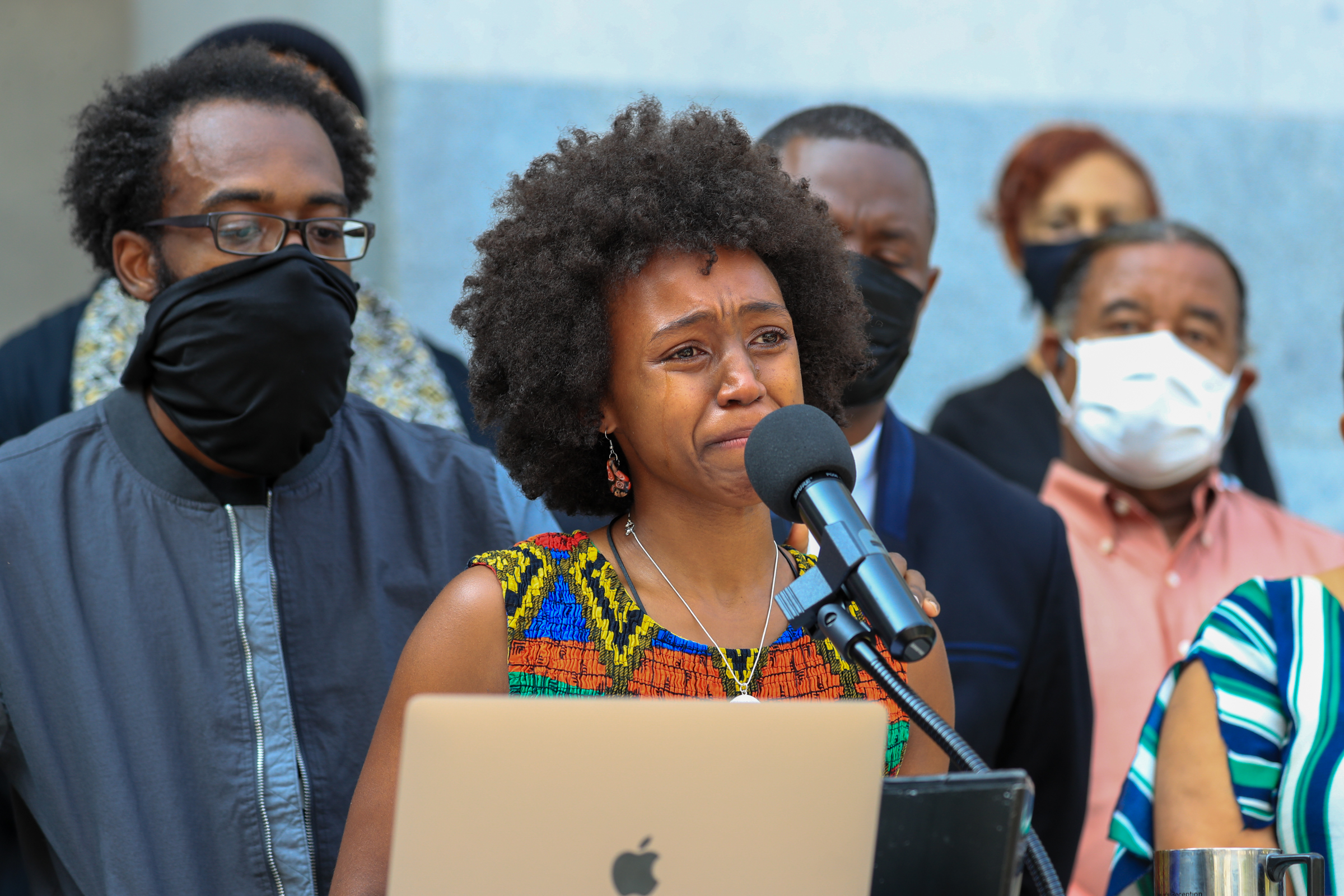 Sacramento, CA – Supporters of Nakia Porter—the 33-year-old woman beaten and knocked unconscious as she pulled over off I-80 last year with her father and three young children in the car, to switch drivers—gathered to push for authorities to act.  However, the strongest voice was Porter by far as she delivered tear-filled but powerful spellbinding advocacy on her own behalf and on behalf of others in her place.

Yasin Almadani, the attorney representing the family, explained last month that Porter, age 33 and weighing all of 125 pounds, “had done nothing wrong” when she was approached by the deputy, explaining that they were simply switching seats.

She was beaten so badly in the incident that she was knocked unconscious.

Almadani said on Wednesday that “anyone who took the time to actually watch the video was horrified by the injustice and terror that was inflicted on Ms. Porter by the Solano County Sheriff’s Office.”

He said that excessive force experts, former law enforcement officers, who saw the video believe that these deputies should be criminally investigated. 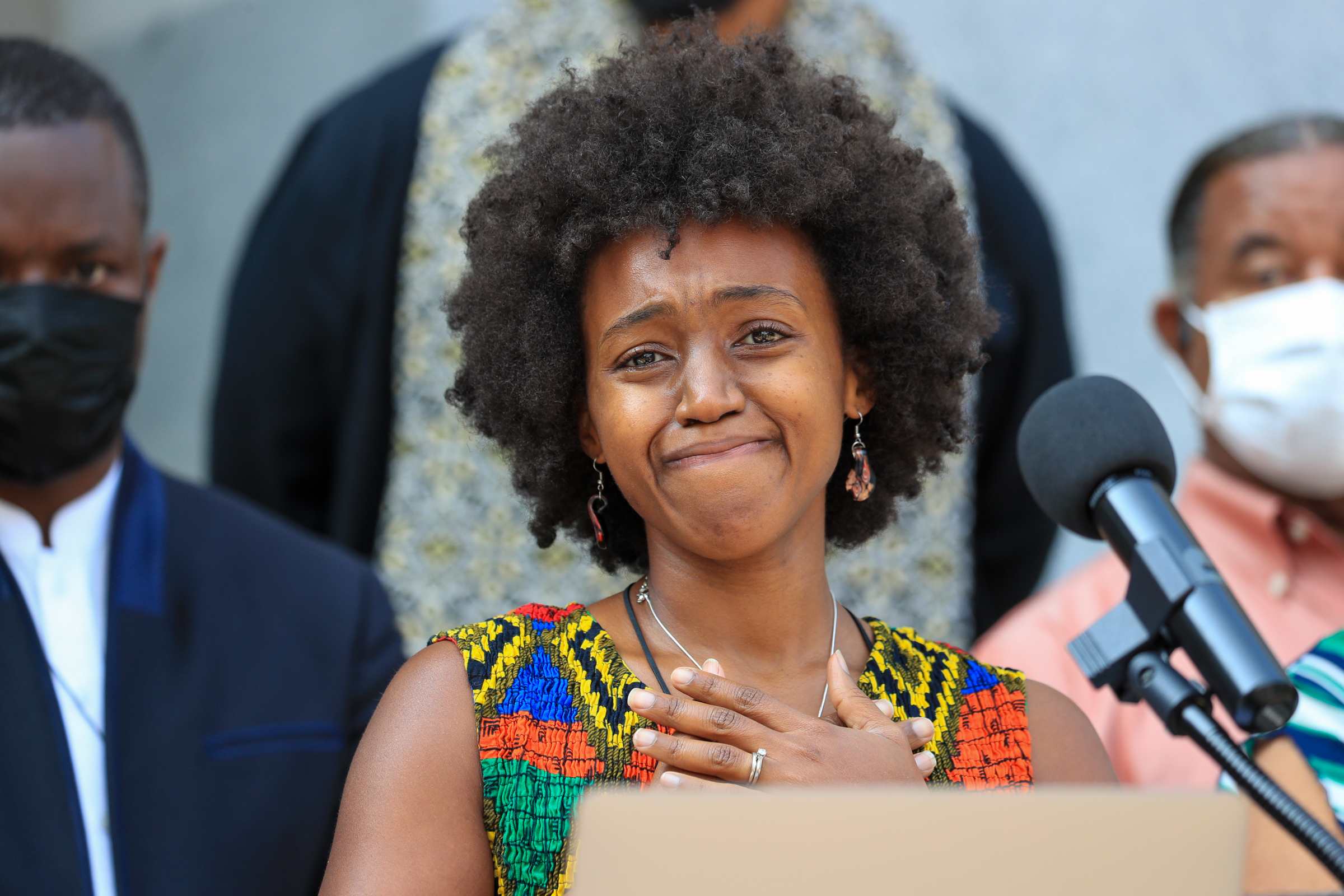 “Think about that for a second—excessive force experts who are former law enforcement officers didn’t say that there should be an internal investigation,” he said.  “The events were so horrifying, what happened to them is so bad that these experts said that these deputies should be criminally investigated.”

Almadani had hoped that Solano County Sheriff Ferrara when he saw the video and the “lawlessness of his deputies, even he would not be able to deny that they should be criminally investigated.”

But that’s not what happened. 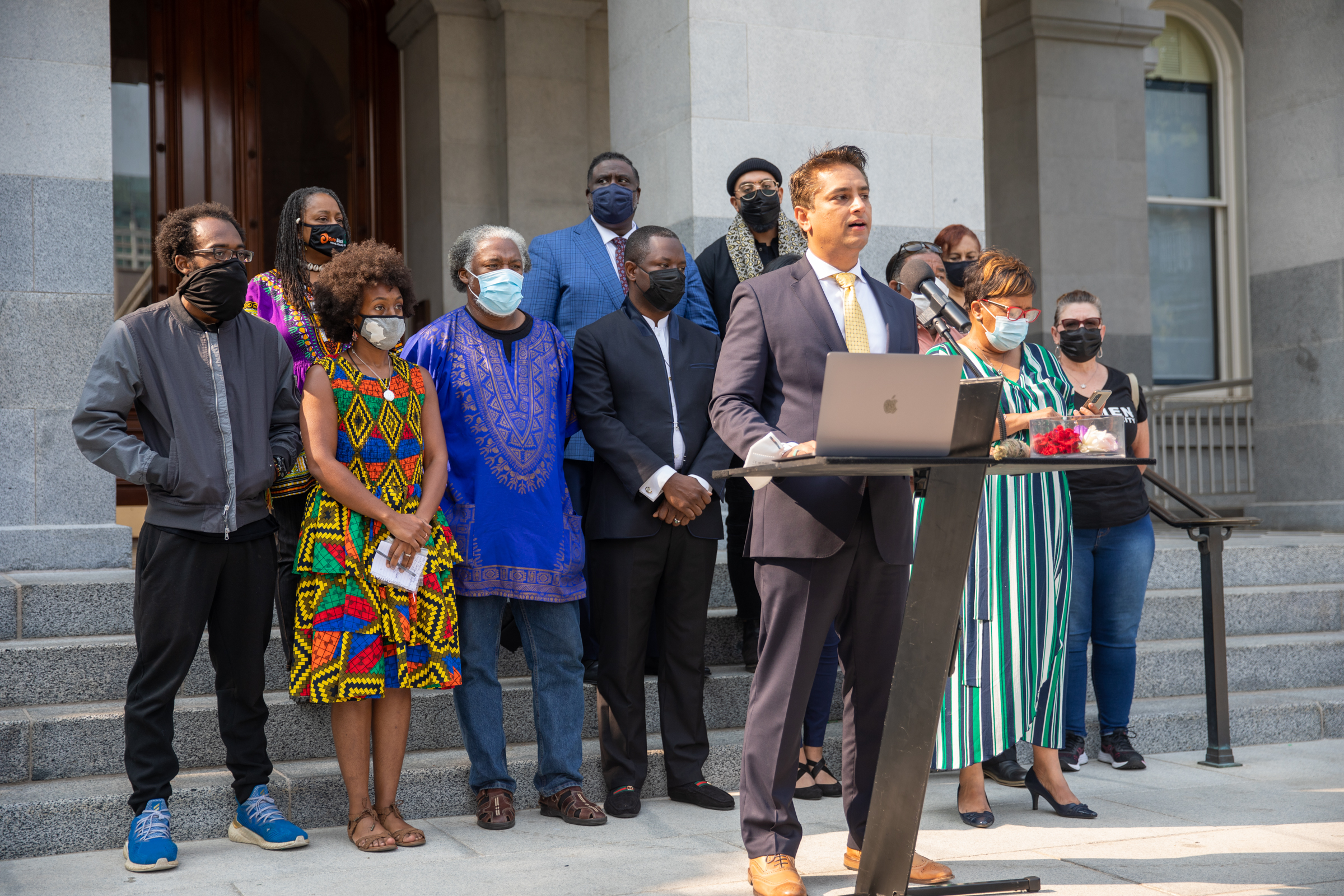 “When the sheriff saw the video, what did he do?” Almadini asked.  “He turned a blind eye and supported his deputies’ criminal acts. So now we know that the sheriff believes that he and his deputies are above the law.”

J.B. Powell, the father of Nakia, said, “I don’t have much to say other than we did nothing wrong. My grandchildren should not have witnessed what happened to that mother.”

But it was Nakia Porter herself who found her voice and delivered—at times tear filled, but also defiant and angry.

She started with tribute to those who have been killed by police, like Stephon Clark, Brianna Taylor, George Floyd and others.

“So many other names of people that are dying daily,” she said.  “SO many others that you do not know their stories because they sink down and they’re afraid to stand up against oppression.” 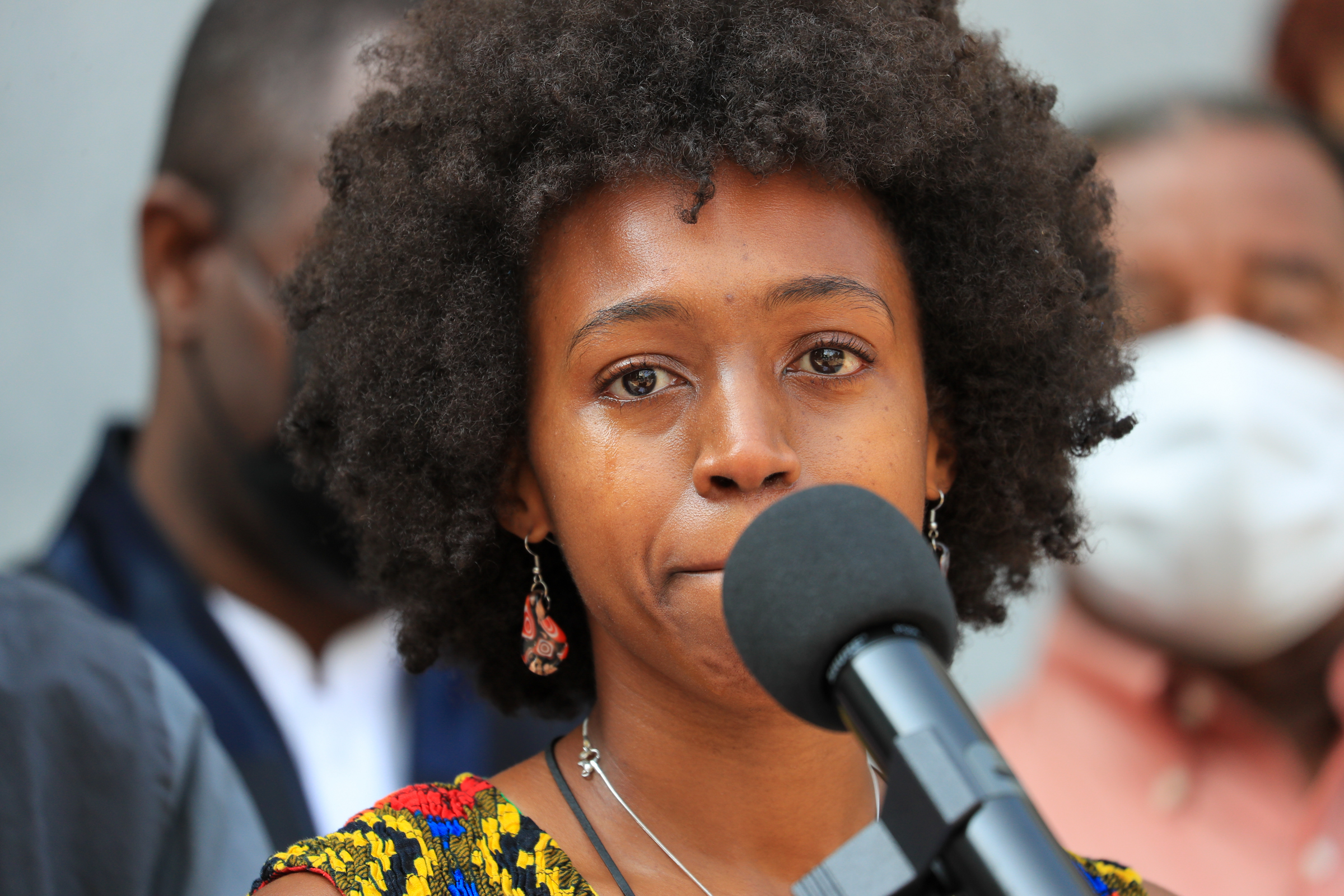 “We have made it normal,” she continued.  “That’s because we wear the mask.  We wear the mask that grins and lies that covers our miles and shades, our eyes, the debt we pay to humankind with torn and bleeding hearts. We smile.”

She quoted Paul Barnes Dunbar from 1892.

She said, “So many of us are covering our faces, hiding, not speaking about the pain at which we go through, because we’re afraid to make people uncomfortable because there’s guilt and there’s pressure, and there’s pain that doesn’t belong to us. That that burden belongs to those that are doing these heinous acts to de-humanize people so they can feel good about them not loving themselves.”

Porter noted that everyone gets tired driving on the road and everyone has gotten jolted by almost hitting something because they are too sleepy to drive safely.

“The best thing to do is pull over to a safe spot,” she said.  “That’s what me and my father were doing because we have three children, we were being responsible, right?” 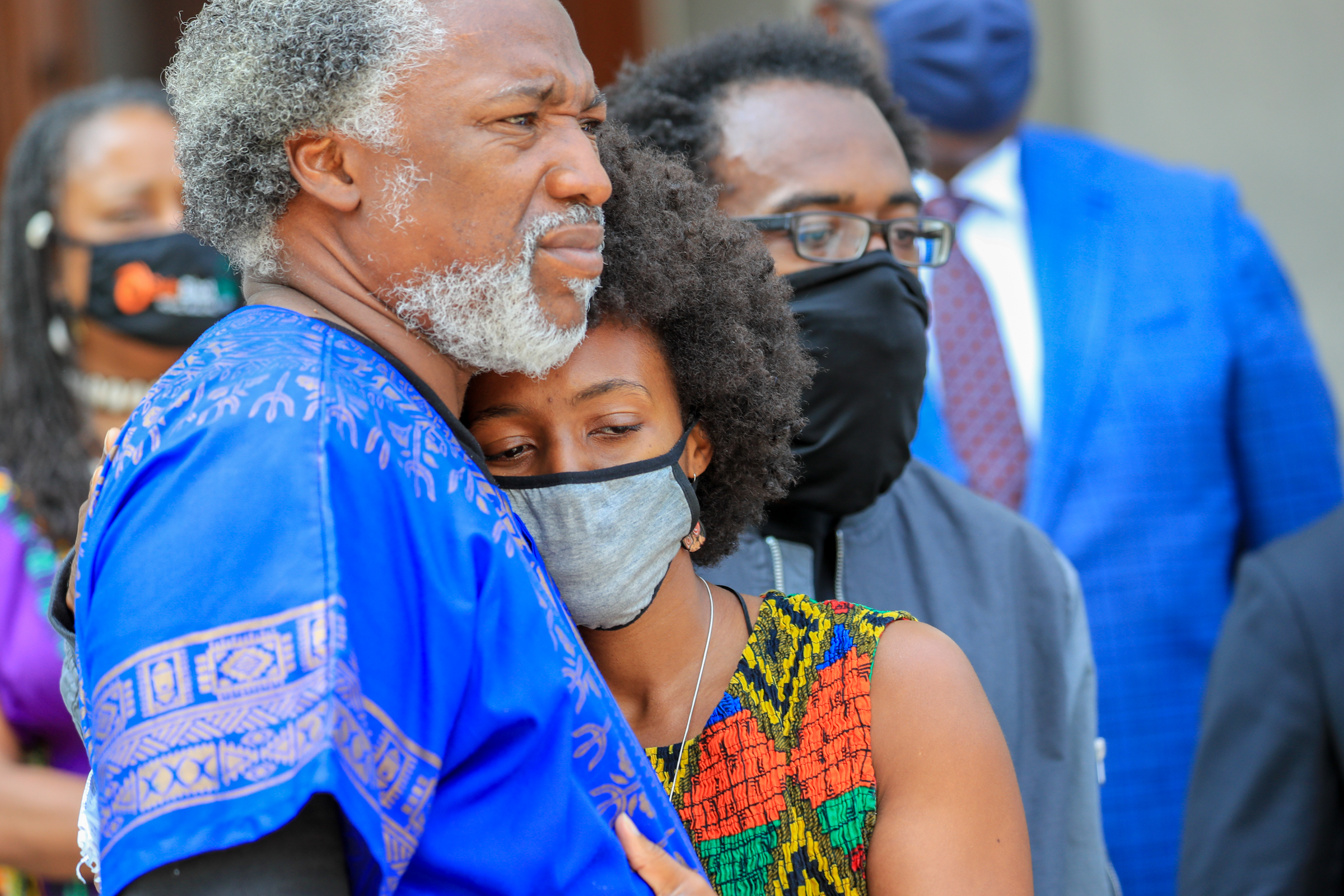 Porter said, “As we were trying to switch our seats, a normal trip (during COVID) to have a good time, turns into a horror story.”

The police came and she said, “I don’t have anything to hide.  I’m not doing anything wrong.  We’re just switching drivers.  Can I continue?  Can we keep doing that somewhere?”

But, she said, they escalated the situation.

“How terrifying is that?” she said.  “Then all of a sudden hands are put on you. Whether in uniform or not, if you were going somewhere and somebody puts hands on you and you are not expecting for anyone to lay hands on—you is fearful. What is about to happen to my life?

“Now I have to explain that to my children,” she said.  “I hadn’t been able to talk to my daughter, my oldest daughter, about what happened for over a year.”

She finally did, she said: “She said, mommy, I was so scared.  She was scared.  Three children under the age of six had their mother taken away, have their grandfather taken away and doors wide open for anyone to come around.  No security.

“This is what I’m talking about.  Systemically oppressed youth.”

She said, “That’s why we’re all here to put the pressure on those that have the position to make the changes. So I don’t have to explain to my children why their mother was assaulted and abused when she was just switching drivers with her father.”

“If you’re going through Solano county, black people be aware because if you have to stop for anything late at night, early in the morning or during the day, and you are approached by a Solano sheriff, you need to be aware,” Williams warned.

She pointed out that this was a mother, a wife and a daughter who had to endure this. 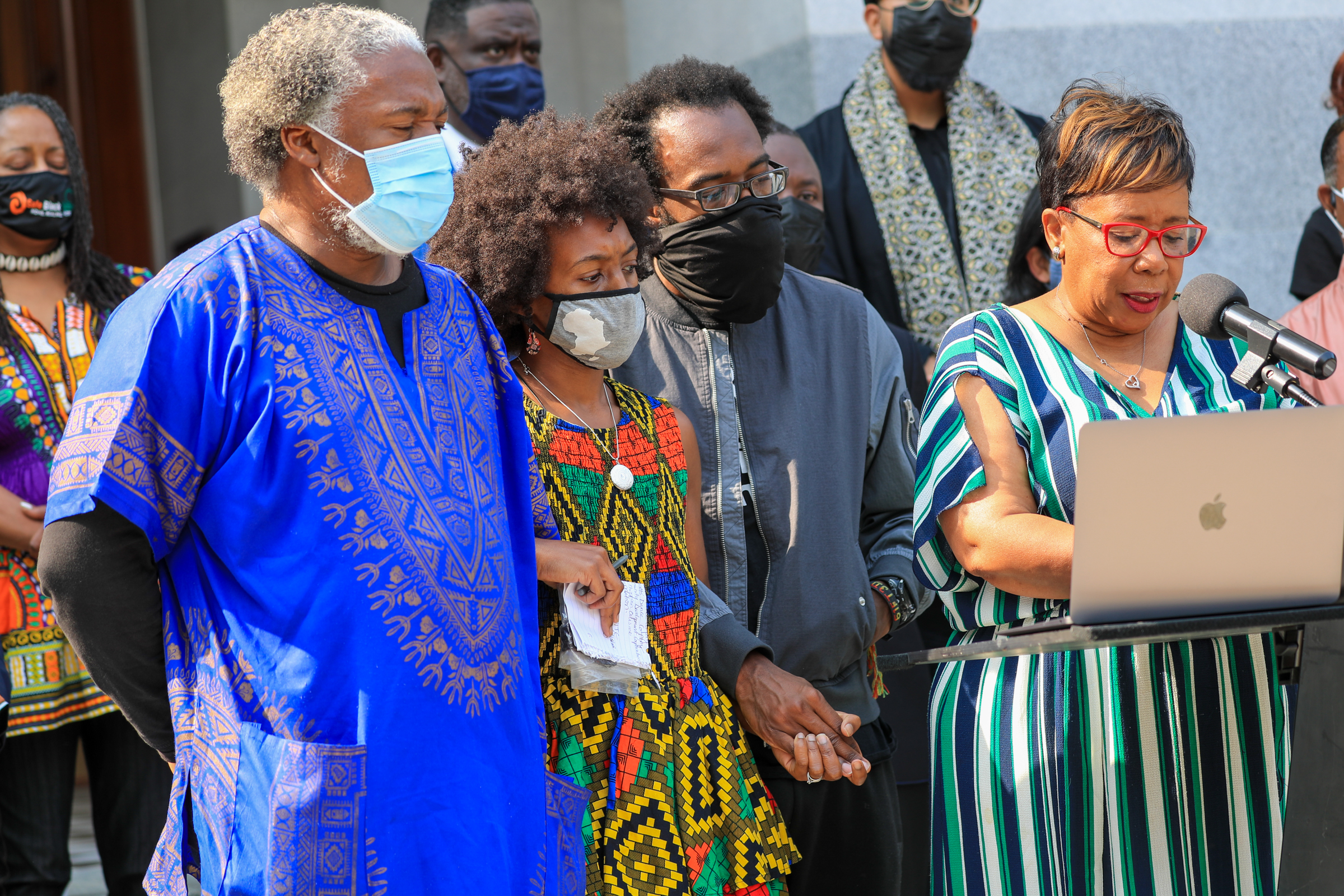 “What I thank God for is that they lived to tell the story,” she said.  She noted that the Sacramento NAACP is investigating the death at Travis Air Force base of another young woman found dead, hanging in her closet.  “The family believes that their daughter was murdered.”

Williams said their famed Legal Defense Fund “is not just looking at this case, but all the cases that we have brought to their attention in Solano County.

“She did nothing wrong,” Williams added.  “The only thing this family did was stop.  They did the right thing when you get tired, you change seats.”

Reverend Decoy Porter voiced his support for “an independent and transparent investigation of the Solano County Sheriff’s Office for this brutal beating.” 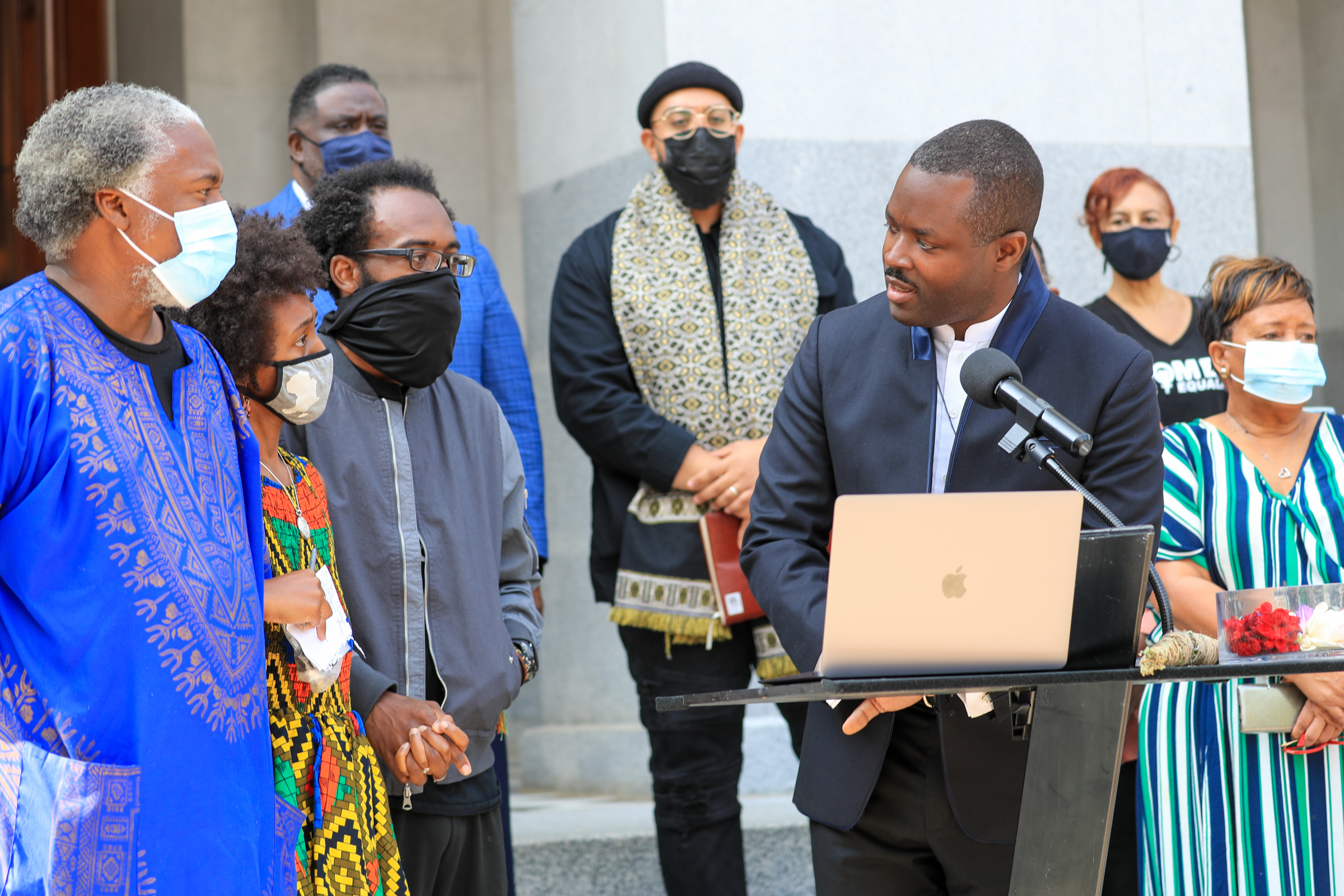 Revered Porter, no relation, said “unfortunately such acts of police brutality continue to happen to people who look like us.

“I am outraged, tired, disappointed, but mostly I’m embarrassed.  I’m embarrassed because it is obvious that even after a George Floyd, after a Brianna Taylor and here in our own Sacramento, I see Stephon Clark (whose family was there) and the landmark police reform laws that our legislature has passed in response to these tragic and unnecessary deaths that we still have a problem, even after all the marching and protest against this very issue of police violence and the overuse of force, our beloved California still has this issue.

“When is enough, enough?” he said.  “When we start to admit that there are just not some bad apples in our law enforcement system, but that there is something wrong with the tree, man, especially when it comes to the policing and use of force practices for Black and brown Californians.”

Yasin Almadani, following Nakia’s remarks, said, “You guys can see why it’s such an honor to represent this young woman and this family.”

He added, “You’ve seen Nakia, how polished, well educated, thoughtful she is.  You saw this side of her championing the rights of others.  She’s taking such a negative experience and turning it into something as productive as it can be.”

Alamdani said, “We call upon the attorney general and the department of justice who have more recently shown to be open, to bringing the change that we need to hold these deputies accountable and change the culture of permissive violence that’s being promulgated in Solano county.” 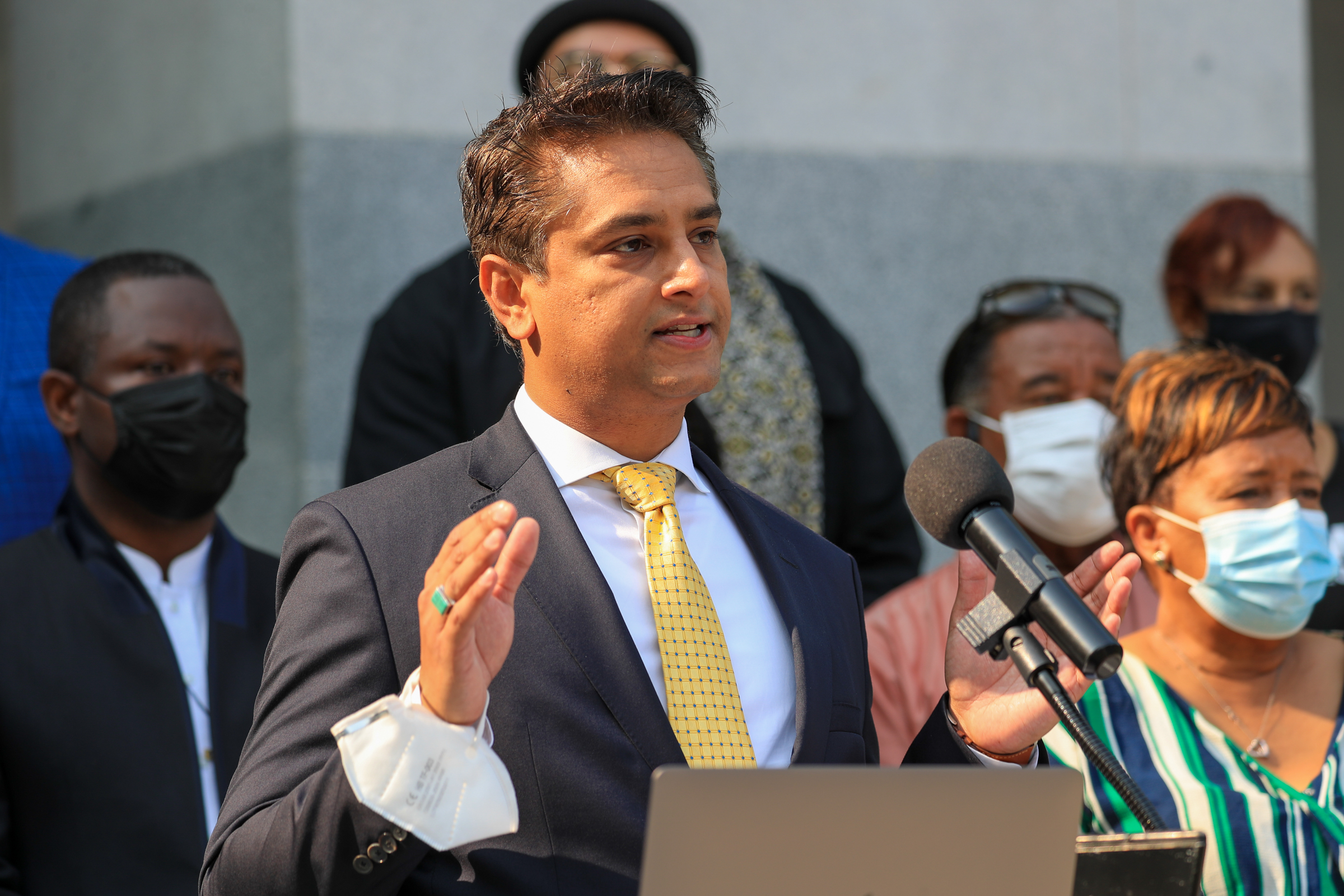 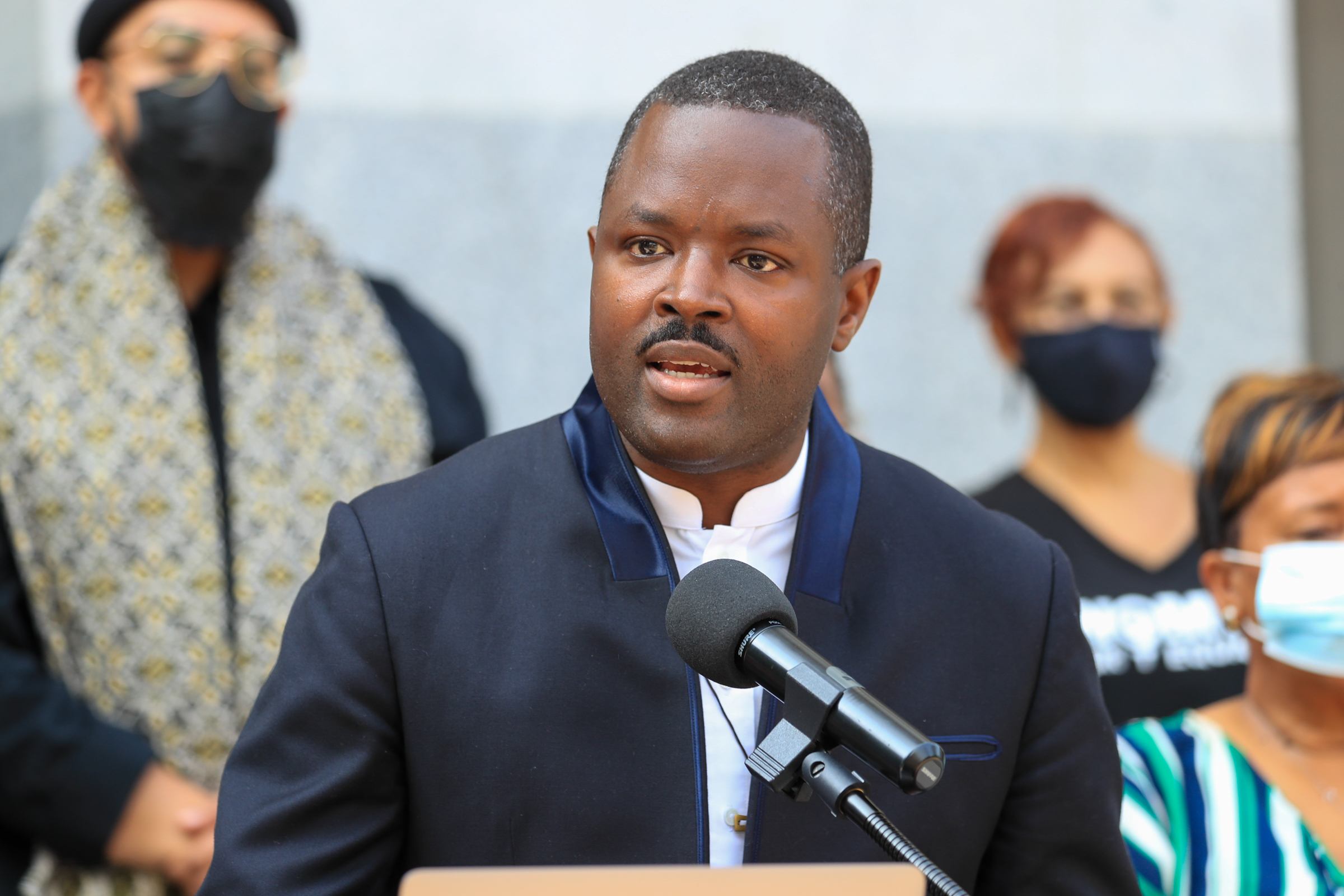 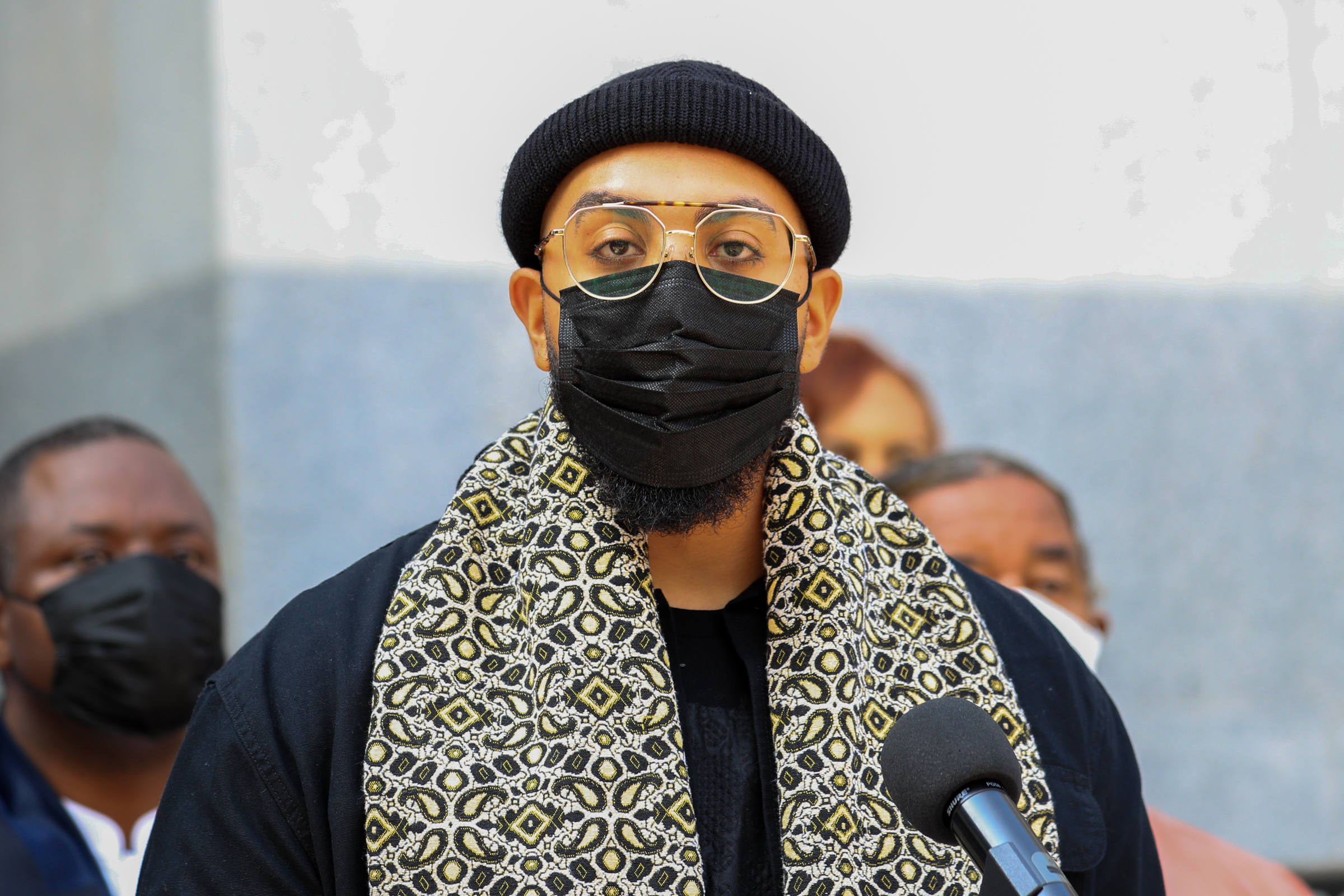 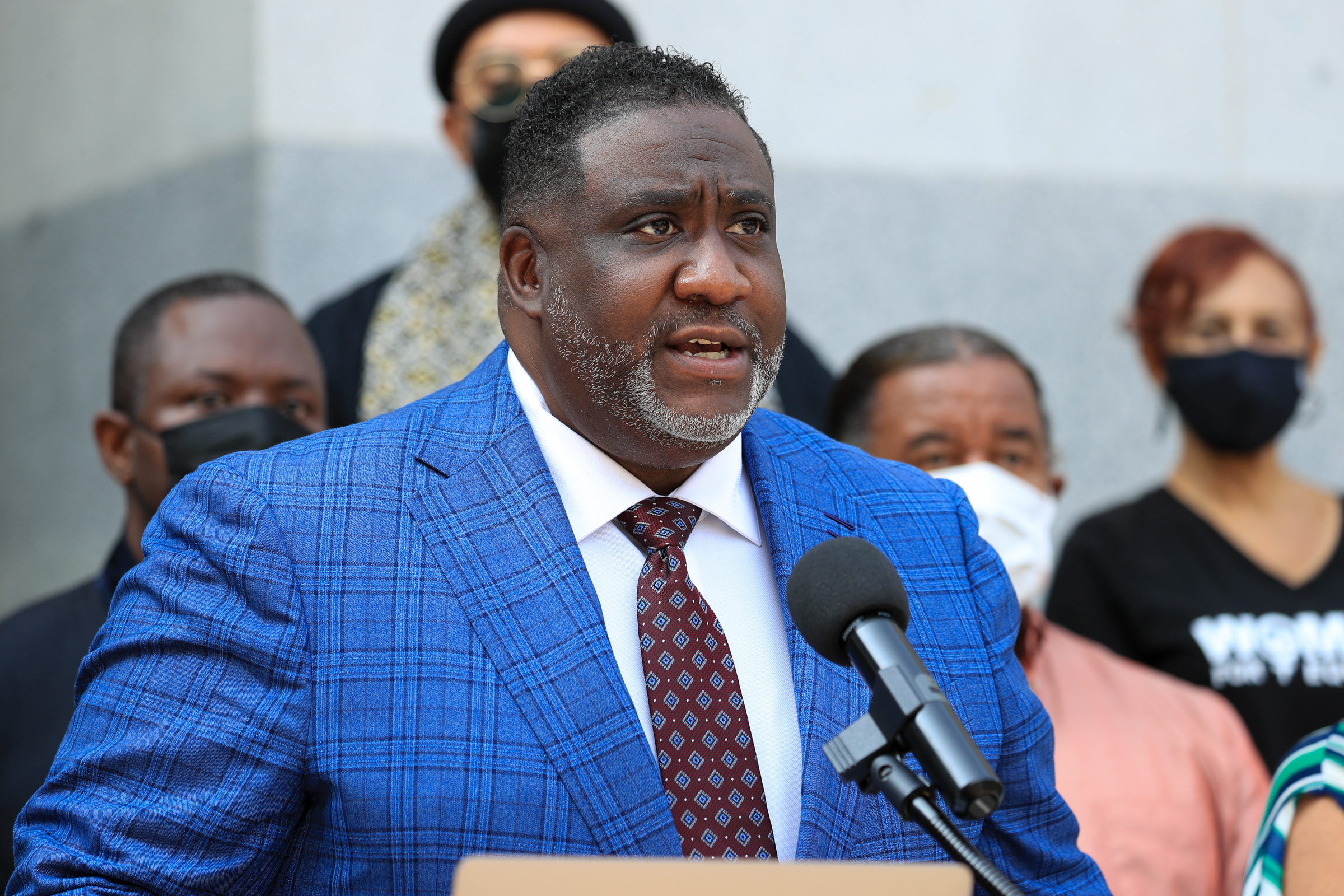 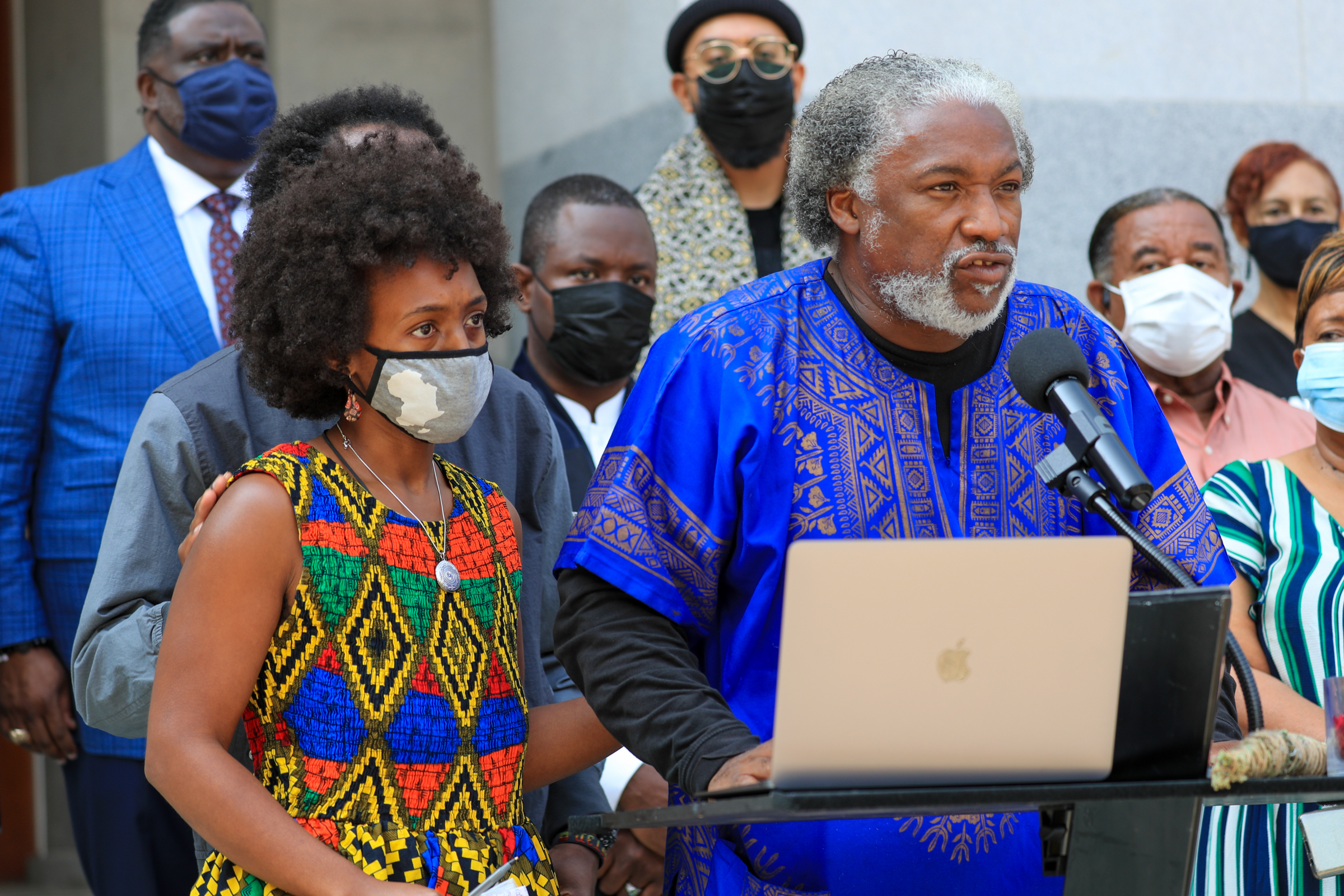 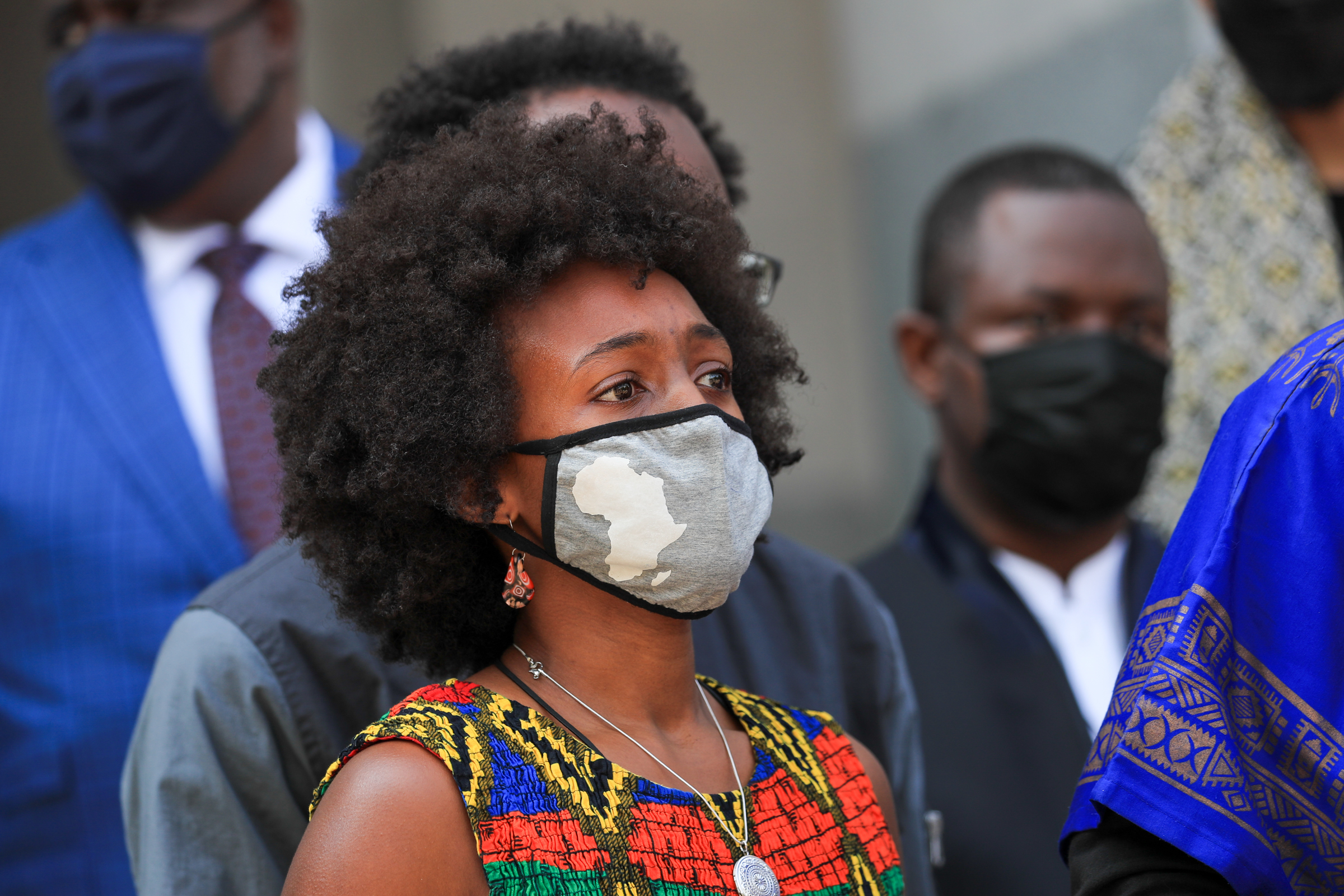 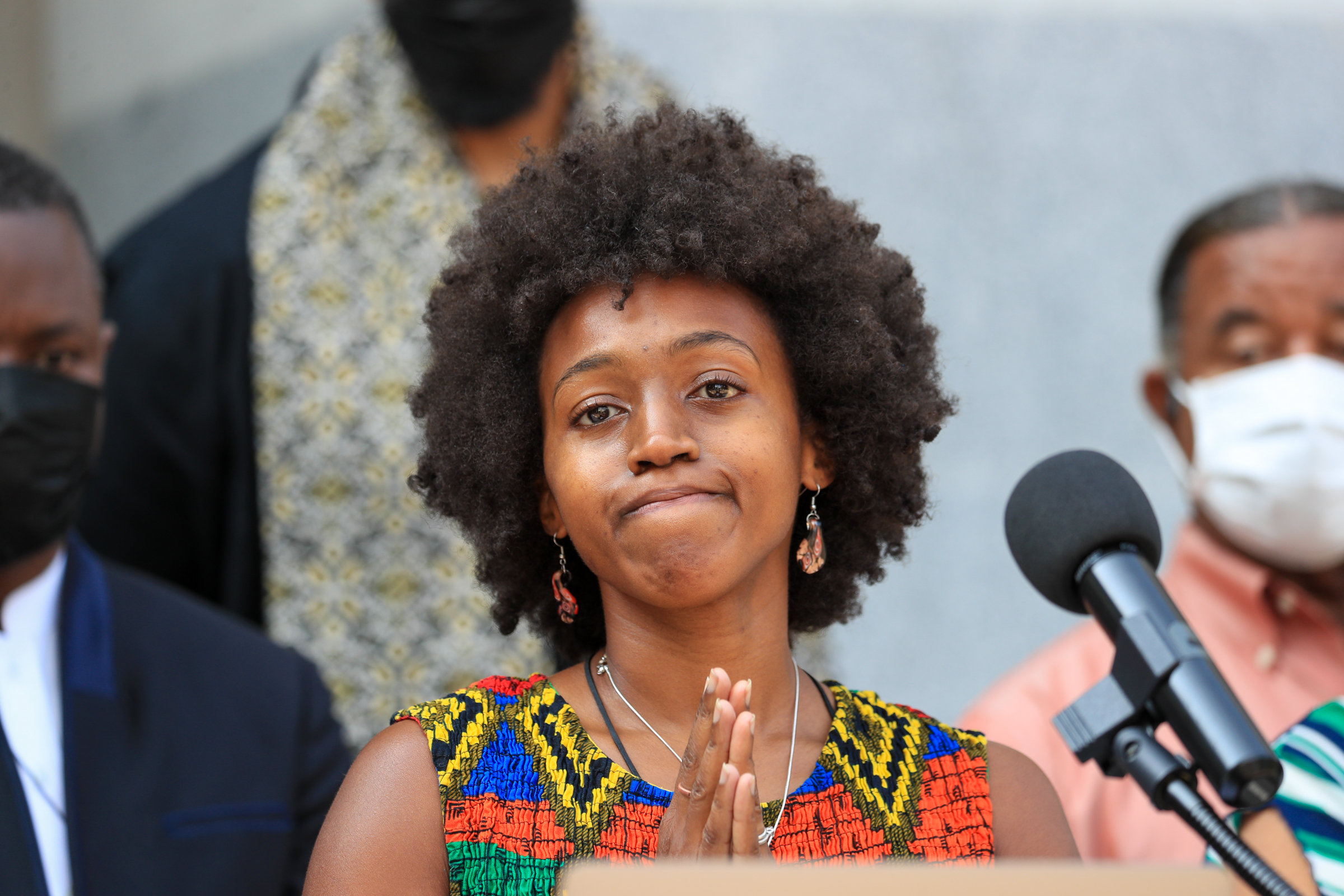 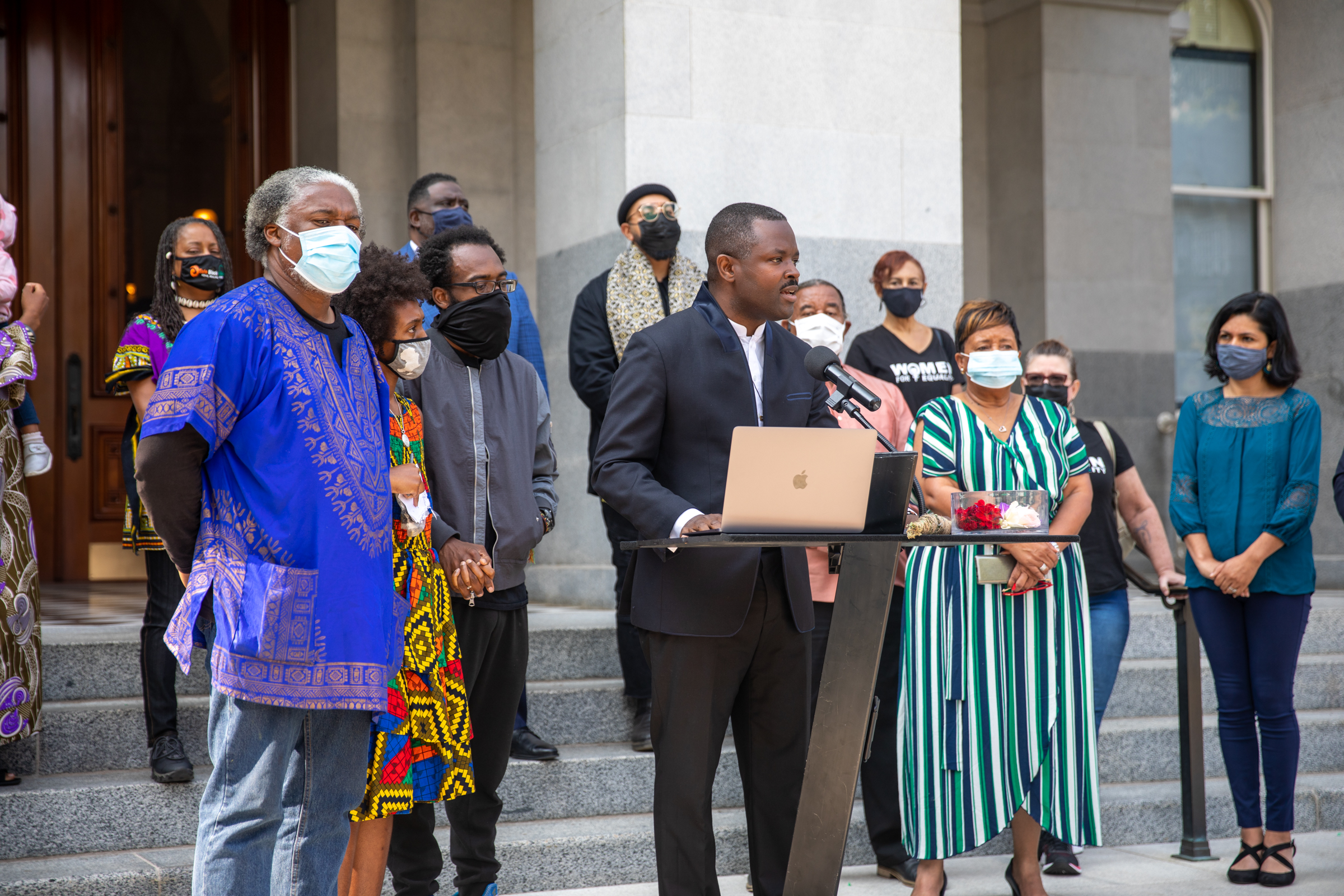 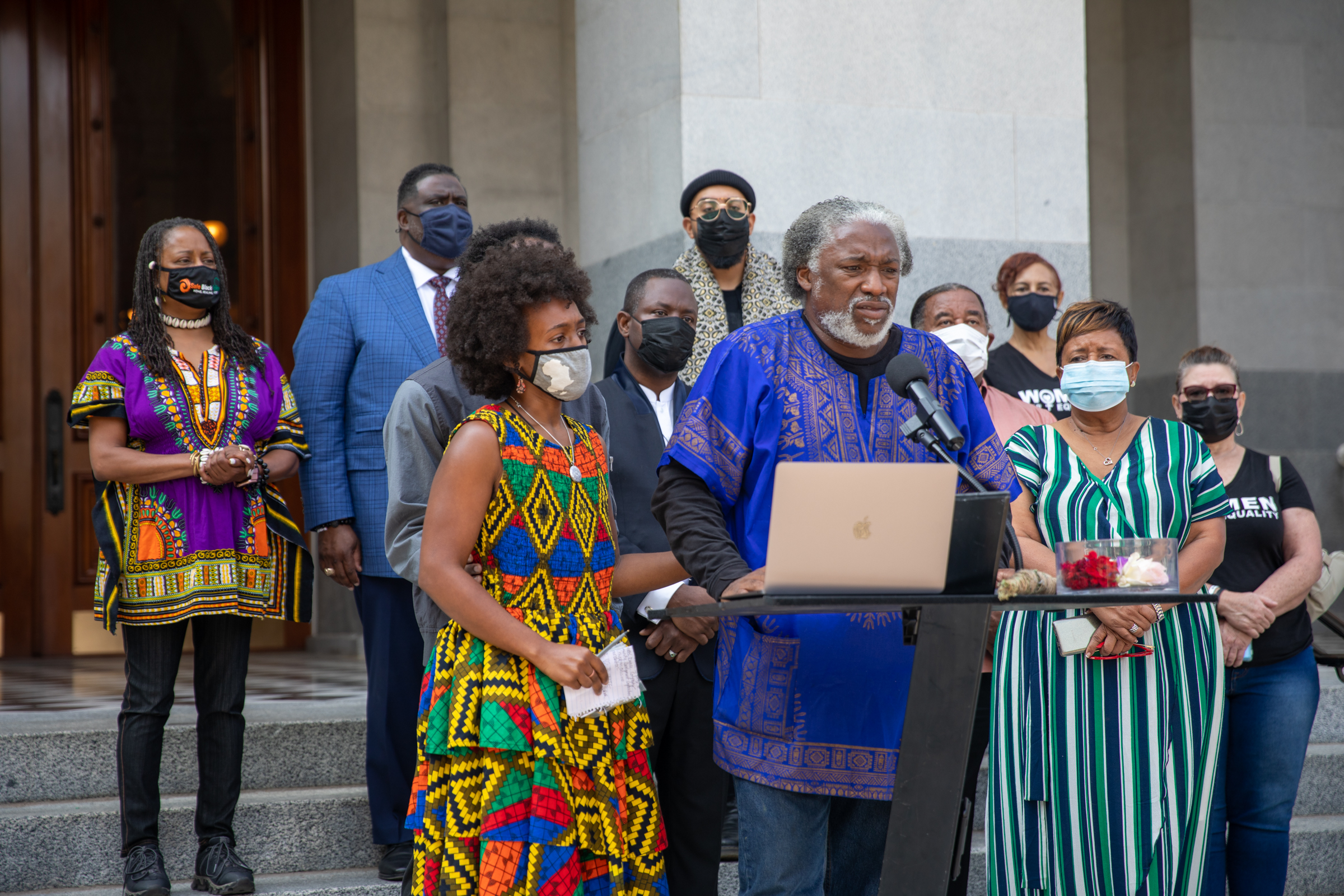 7 thoughts on “Nakia Porter Speaks Out about Solano County Incident, As Her Supporters Call for Action”