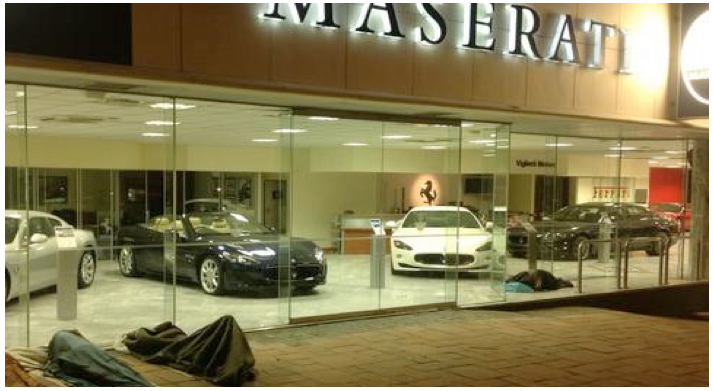 Late on a Thursday night in Woodland Hills, California, the recessed lights of the Maserati Auto Gallery spotlight a gaggle of sleek, luxury automobiles; like carbon fiber and plexiglass statues standing in relief, their muscled torsos gleaming, they show off their voluptuous curves, bold coloring, and clean, sharp lines. Masterpieces of human ingenuity, these works of art demand to be ogled, gazed at and above all else … to be seen.

In the foreground like in a soothing mural of a city at sleep there’s a man, but he’s not made of paint. Seemingly oblivious to the world — just as the world is to him — the man is sprawled on a bus stop bench. He lies so close to the Maseratis that their cool light refracts off of the storefront glass, illuminating the remaining white of his soiled, tattered shoes.

Across the street, rummaging through a trash can in front of Whole Foods, is a middle-aged woman; she’s got straight shoulder-length grey hair, a weathered noble face, and at least three layers of clothing on despite the lingering mugginess leftover from the day’s heat.

Stoically, this woman forages, inspecting her finds quizzically but also in an experienced and depressingly practiced way. Periodically, she will sigh deeply, and sometimes she will add a plastic bottle or soda can to her burgeoning collection; already piled high, it threatens to topple

down from her overly-full shopping cart.

Visible under the woman’s recyclables is a cornucopia of blankets, clothes, foodstuffs, a battered (but maybe not broken) clock radio, an umbrella, a few books, and a magazine — last week’s New Yorker. The New Yorker lies on the cart’s bottom rung next to a framed photo of a smiling young woman; it’s a spitting, albeit much younger, image of the grey-haired woman now picking through the detritus of the rich, just to survive.

The beaming woman in the picture wears graduation garb and she holds a diploma high above her head like the Statue of Liberty holds her torch. If you look closely you’ll see that the glass of the picture frame is cracked.

Seeping from doorways and neighborhood storefronts of still-open restaurants and bars comes contented laughter; the sound is shrill and jarring as it whistles down the boulevard, swirling past the man who is sleeping (or maybe not sleeping) with the Maseratis. Occasionally, an unintelligible shard of conversation — happy, animated voices — punctuates the din of the night air, before dispersing, slowly disappearing.

Soon young men and women the same age as the smiling girl in the picture frame, their dress immaculate — with hair, makeup, and expensive outfits still impossibly fresh and unwrinkled despite the lateness of the hour — will emerge from the various establishments. They’ll spill out onto the sidewalk like a ragtag collection of wayward sheep. Shepherdless but feeling satisfied, with sloppy stumbles now and again, they successfully make their way to their own Maseratis or Maserati-like cars. Revving well-maintained foreign motors, some lighting cigarettes for the road, they head for home.

Barely taking notice of this departure, the woman in front of Whole Foods digs deeper — she’s reached the bottom of the barrel now. And across the street, the man on the bench rolls to his other side and pulls the drawstring on his hoody tight; he’s already home.

Stephen Cooper is a former D.C. public defender who worked as an assistant federal public defender in Alabama between 2012 and 2015.  This article was published in November 2016 in City Watch Los Angeles.

One thought on “Guest Commentary: The Man Living in Front of the Maserati Store”