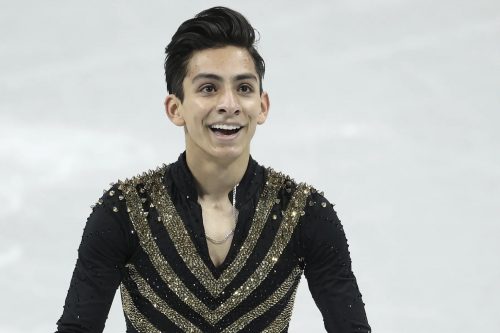 With the Winter Olympics taking place we are introduced to many hardworking and one-of-a-kind athletes from around the world. These athletes have worked their whole lives enduring trials and tribulations to represent their nation and sport to the world. In many cases, however, I found myself learning far more about the individuals than the sport, and I believe that their perseverance and background deserve as much attention as their talents as athletes. Such was my case with the Winter Olympic Games in Beijing learning about Donovan Carrillo, Mexico’s first figure skater since 1992.

Donovan Carrillo was born in Zapopan, Jalisco, where he started figure skating at eight years old. Despite the challenges Carrillo faced while training, such as the lack of ice skating rinks in his community along with family financial struggles, he did not allow those hardships to stop his training. For instance, there were times when he trained in a public ice-skating rink located in a local mall. His parents also worked hard to make sure they had enough money to afford the equipment required for Carrillo’s training. Due to their perseverance in overcoming the obstacles, it almost seemed as if everyone in Carrillo’s life knew he had a chance to make it big in the sport.

While Donovan’s talent was never questioned, his sexuality became a topic for critics who did not understand why Carrillo chose such a “feminine” sport over ones like soccer and boxing. While figure skating is a staple sport in the Winter Olympics, it is not always as popularized or accepted within certain countries and genders. Heavy machismo sentiment followed Carrillo by critics who simply did not bother to comprehend that figure skating is a sport equally extensive and demanding as other sports considered “masculine.”

In an Outsports article written by Cyd Zeigler, a tweet made by Carrillo was included. The tweet states the following (in Spanish): “I don’t mind being called gay because I am NOT. It infuriates me that they see the word gay as a mockery or an insult to my effort.” Carrillo responds to critics as gracefully as he performs on the ice.

As a matter of fact, it was the criticism that Carrillo faced that made him work harder towards becoming the first Mexican figure skater to enter the longer free skate competition. The free skate competition in the Olympics means that skaters have more time to perform a routine, allowing competitors a greater opportunity to highlight their talents. Carrillo’s time at the Olympics has led him to break numerous boundaries that will inspire future figure skaters to not be afraid of expressing their passion.

On Feb. 9, after falling from a turn while performing his free skate, Carrillo was no longer in the running for a medal. While Carrillo did not receive a medal for his performances, he looks forward to returning for the Milan Winter Olympic Games in 2026. Grateful that he achieved what people had told him was impossible, Carrillo stated that “many people told me at the beginning of my career that this was a crazy dream.” It was not, he made this conquest a reality.

While the Olympics are sports and patriotic-centered, it is important to keep in mind the humble upbringings of some of the world’s best athletes. It is the barriers that athletes like Donovan Carrillo overcome, that give hidden talented athletes an outlet to stardom. Due to Carrillo’s history-making performance for Mexico, more figure skaters in the nation will be motivated to follow in his footsteps, especially male skaters who have been humiliated for their participation in the sport.

Carrillo’s grace on and off the rink has inspired me and makes me respect athletes’ hard work. While I’m not a sports person, athletes face many hardships that I have, experiences that are universal. It is the many athletes like Carrillo that work hard to earn those medals and deserve to have their stories heard—not simply to be a tally for their nation on the scoreboard.

Share:
Previous : Sunday Commentary: Could Measure J Withstand a Legal Challenge?
Next : Man Claims Turned Life ‘Around’ Since 80s, but Judge Sentences Him to 8 Years after He Commits Another Violent Crime